There will be no megawatts, wait for megatons: Russia refused to supply uranium to the United States 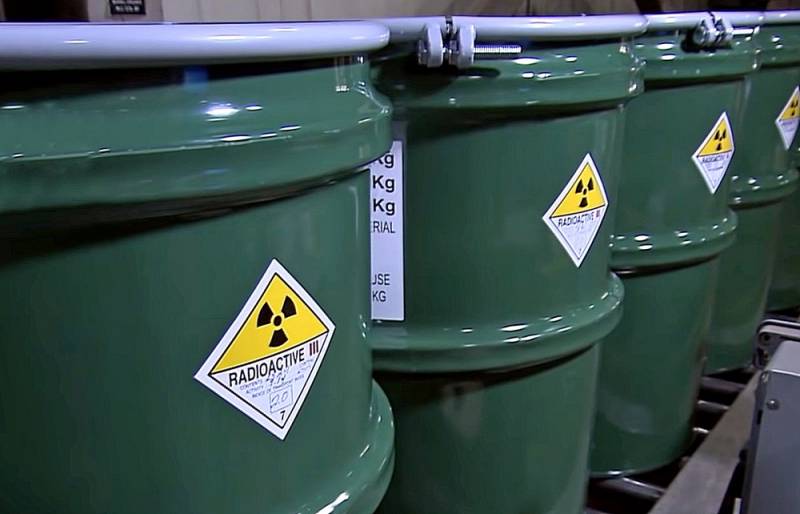 The domestic government unilaterally withdrew from another agreement, which was the product of a vicious capitulatory policyheld after the collapse of the USSR by the then leadership of our country. This is an agreement that regulated the supply of uranium hexafluoride from Russia to the United States, a derivative obtained after diluting and reprocessing the contents of the warheads of our nuclear weapons, which were “put under the knife” as a result of the Kremlin’s drive to “disarm” in the 90s.


In order to understand the true reasons and significance of this step both for our country and for the United States, it is necessary first to understand the essence and meaning of the currently terminated agreements.

All of them should be considered in an indissoluble unity, since what Washington has done and planned to do in this area since 1991 had only two goals. The first is the complete deprivation of the nuclear potential of every single country of the then formed "post-Soviet space". And the second is getting the maximum material benefit from this. Everything is as usual with the Americans ... These motives, as usual, were covered by the most good intentions: American Congressmen Sam Nunn and Richard Lugar suddenly became terribly concerned about the problems of the safety of atomic weapons stationed in the former republics of the Soviet Union and their possible "hit into the wrong hands. " "Kind and generous" overseas "partners" expressed the most ardent desire to help with the solution of these problems. At the same time, a number of agreements were concluded, the main of which was START I and the Lisbon Protocol annexed to it later, according to which Belarus, Ukraine and Kazakhstan renounced nuclear status. All atomic weapons that were previously in their territories were transferred to Russia - and at the same time all the problems with their further storage or disposal.

Undoubtedly, the main goal of the Americans was to turn our ballistic missiles, strategic bombers and submarines into piles of useless and harmless for them scrap metal. However, the problem of enriched, "weapons-grade" uranium remained. In the end, missiles, or, at worst, bombs can be made and new ones - there would be a desire. And in Washington they really wanted to "pull out the atomic teeth of the Russian bear" with one hundred percent guarantee. And not without its own benefit. Scientists Jeff Coms and Thomas Neff were the first to put forward the idea that the "completely unnecessary for the Russians" uranium, which will remain after their disarmament, would be nice to use as fuel for American nuclear power plants, calling it a "win-win option." This happened, which is typical, back in 1989, which proves that the Americans "buried" the USSR even then.

In 1991, when the Nunn-Lugar program was already approved, one of the authors of the idea returned to this issue - Dr. Thomas Neff from the famous Massachusetts Institute of Technology. They were the ones who proposed the HEU-LEU formula, deciphered as the translation of highly enriched weapons-grade uranium from "Russian warheads" into low-enriched uranium for US nuclear power plants. Neff called it the "great uranium deal" and was not wrong. At that moment ... However, let's not get ahead of ourselves. The White House and the United States government received such initiatives very favorably, and the then President of Russia was ready to carry out almost any command from these authorities. Moreover, our "partners" have made good insurance so that Moscow "does not jump off the hook." After all, commercial supplies of uranium to the West (including the United States) from the USSR began long before its collapse - the first relevant contracts date back to the 70s of the twentieth century.

However, in 1992, the Department of Commerce and the International Trade Commission of the United States "suddenly" initiated an anti-dumping investigation against our nuclear raw materials. The result was the introduction of a "suffocating" duty of 116% on all uranium coming from Russia. Is it any wonder that at the end of 1992, just before the conclusion of the HEU-LEU Agreement (signed on February 18, 1993), the “anti-dumping investigation” was allegedly “terminated”. In fact, no one thought to give up claims to our country. Simply making a final decision on them was "postponed", and extortionate duties were temporarily removed. However, the "sword of Damocles" itself, hanging over the supplies, has not gone anywhere.

Will we light and warm America?

The knocking out of the warheads, the depletion of the weapon-grade uranium obtained from them and the subsequent deliveries of it to the United States were carried out within the framework of the program with the loud name "Megatons to Megawatts". Megawatts were really more than enough - starting from about 2000, when the refining cycle and, accordingly, the supply level reached the design level, they provided almost half of the fuel needs of the United States nuclear energy, which was equivalent to about 10% of all USA at this time of electricity. Estimate the scale, considering the size of the country and its energy “appetites” ... No wonder - after all, 500 tons of highly enriched weapons-grade uranium were processed within the framework of HEU-LEU, from which about 15 thousand tons of uranium hexafluoride, which went overseas, were ultimately obtained. It cannot be said that it was paid at a high price, however, according to calculations, the total amount that came to Russia's income as a result of the transaction is $ 17 billion. At the same time, however, it was not without very high-profile corruption scandals, in which officials were implicated up to the national minister for atomic energy in 1998-2001 Yevgeny Adamov and other leaders involved in HEU-LEU.

At the same time, it was about tens, if not hundreds of millions of dollars, who "floated away" to who knows where. Be that as it may, the last deliveries of low-enriched uranium from our country to the United States were carried out in 2013, and now Russia has officially declared its unwillingness to continue the deal further. We will definitely no longer destroy our own warheads - quite the opposite. If you want to receive uranium for nuclear power plants - buy at the prices that we will tell you. Better yet, buy ready-made fuel rods, so it will be even more profitable for us. And, at the same time, stop trying to squeeze out Russian nuclear scientists from wherever you can. From Ukraine - in particular ...

On closer examination of the final result of the HEU-LEU deal, it turns out that, whatever one may say, she played a cruel joke not with Russia, but with its initiators - the Americans. First of all, they failed to carry out, within the framework of the Nunn-Lugar program, the complete destruction of our military potential and, first of all, the defense industry. For those who continue to believe that American senators and the government in this case acted out of considerations of altruism and concern for world peace, I recommend that you familiarize yourself with the revelations of such a famous person as Ashton Carter, who at one time was an assistant to the head of the Pentagon and one of the developers US nuclear doctrine. In one of his interviews, he honestly admitted: the crown of the program was "tens of thousands of scientists from the Russian military-industrial complex who signed contracts with the United States and dreamed not to create submarines and missiles for their country, but to destroy them." The same character, by the way, announced the fact that at least 85% of the funds allegedly “allocated to Russia” for disarmament at Nann Lugar went into the pockets of American military contractors.

The end of all this came, unfortunately, only in the same 2013, when we stopped "feeding" American nuclear power plants with our uranium - it was then that the doors of at least the most secret objects of the domestic military-industrial complex were slammed shut in front of the "specialists" from the United States, where they had previously felt myself almost at home. Today, in the American media, voices of all sorts of "experts" are already heard with might and main, who say that Russia "must explain why it terminated the treaty" and "highlight the issue of how control over its nuclear materials will now be exercised." How, how ... No way! Why did you decide at all that you should and can control us?

Also, one of the important moments of the reaction of the US representatives to the decision of our government was the statement that followed from the Orano company (formerly COGEMA, later Areva) that Russia's withdrawal from the agreement “will not entail negative economic implications for the company and its customers "as it" possesses a number of other sources of natural uranium supply. " Perhaps these soothing speeches are true, but the main problem for the American nuclear power industry is different. Believing that supplies from Russia would last exactly as long as they wanted to the United States, and on their terms, they completely abandoned the development of their own nuclear facilities. Ultimately, this led to the fact that, according to American analysts, the most important thing in the cycle of obtaining both fuel for nuclear power plants and highly enriched uranium is Technology on the separation of its isotopes, are in the United States today "at the level of the beginning of the 90s of the last century." Right now, when the United States is determined to get rid of dirty electricity generation by burning coal or natural gas as soon as possible, this is a very bad thing. news... There is, however, another - much worse. The billions of dollars received from the sale of uranium from missiles cut to please Washington have not been plundered or wasted in Russia. They were used to accelerate the industrial and scientific development of the country. And, including its military-industrial complex. What an evil irony of fate - the Americans, who were trying to nullify the military potential of Russia, essentially financed the creation of Avangards, Daggers and Poseidons.

Uranium supplies to the United States can be continued - there are corresponding agreements and contracts. However, now this will be done at a fair, market price, and not "as they decide in Washington." There, however, the head of the mournful Russophobes is missing, who urge the Russians not to buy uranium in any case. At the very least, introduce draconian duties on it again. Well, gentlemen - you wish to return to the candle and the splinter, your will. From now on, Washington will have to take care of obtaining megawatts for its citizens and industry on its own. And at the same time - to think hard about your behavior, so as not to get megatons from overseas ...
Ctrl Enter
Noticed oshЫbku Highlight text and press. Ctrl + Enter
Reporterin Yandex News
Reporterin Yandex Zen
54 comments
Information
Dear reader, to leave comments on the publication, you must sign in.