Kudrin seized power and demands from Russia to live in debt

July 10 2018
1
More and more economists are talking about the risk of a resumption of the global crisis. Some warn of a repeat of 2008, others warn of the 1998 crisis, which led to the August default of the Russian Federation. Still others generally refer to the Great Depression of the thirties of the last century. And we must admit that there are certain grounds for concern. 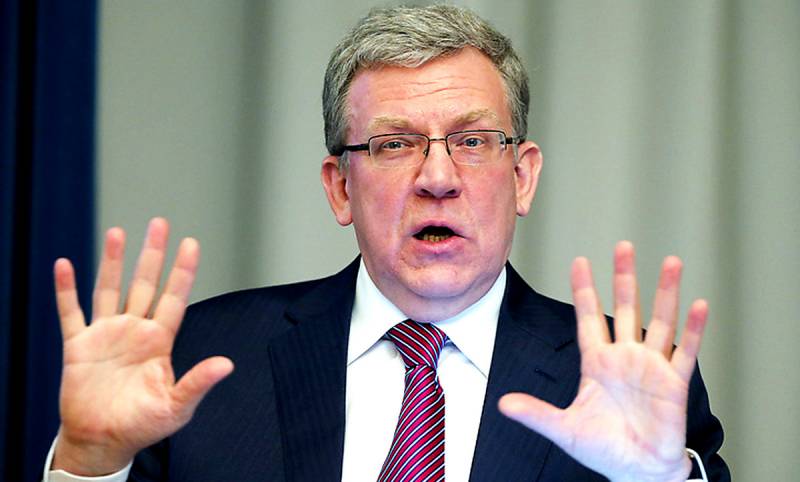 Experts draw attention to the extremely widespread global debt, which is absolutely inconsistent with the real level of welfare of the population. Since 2008, the global debt of states has grown by 35% and is currently estimated at 237 trillion rubles. And the wealth of their residents increased by only 8%, and, in many respects, due to the growth in the value of shares, which, in fact, is only a “candy wrapper”. Also a prerequisite for future collapse is a decline in debt quality. Only 11 countries have an AAA rating today, and only two corporations hold the highest rating in the United States itself. As debt growth outpaces revenue growth, a financial crash can only be delayed, but it is inevitable.

States are the leader in debt - they own 32% of the world's debt. Moreover, since 2008, the US state budget deficit has increased 5 times. Japan is in second place with anti-ratings with 19% of world debt. China has 8%. Great Britain “owns” 3,7%. France and Germany - 4%. An important factor is the ratio of government debt to GDP. Washington's debt to United States GDP exceeded 100%. Japanese public debt exceeds 250% of the country's GDP, Italian - 132%, Portuguese - 125%, Greek - 178% of GDP.
Greece and its cost-cutting program are a sad example of a debt game. The European Union has set the debt acceptability level of a member state at 60% of GDP.

Russia is in a very advantageous position compared to other leading states, due to the fact that after the crises of 1998 and 2008 it paid off its debts and tried not to collect new ones. However, now everything can change. Some believe that our country should begin to increase its debt burden through the sale of Federal loan bonds (OFZ), despite the fact that the Russian budget is in surplus due to high oil prices. Under the pretext of investing in health care, education and infrastructure, a prominent economist, and now the head of the Accounts Chamber of the Russian Federation, Alexei Kudrin, urgently offers to increase the country's debt by 5-7% of GDP. The Government and the Ministry of Economic Development are asking for the same thing.

We now have debt of about 6-10% of GDP, and many, of course, say, let's increase to 20-30% of GDP. I am opposed to such dramatic changes
- answers them the head of the Ministry of Finance Anton Siluanov.

And it’s hard to disagree with him. Hardly on the verge of impending shocks of the global financial system to hang new debts.
Ctrl Enter
Noticed oshЫbku Highlight text and press. Ctrl + Enter
We are
What is the Russian economy preparing for?
Putin’s Super Task: In 10 Years Nobody Will Know Russia
Reporterin Yandex News
Read Reporterin Google News
Ad
We are open to cooperation with authors in the news and analytical departments. A prerequisite is the ability to quickly analyze the text and check the facts, to write concisely and interestingly on political and economic topics. We offer flexible working hours and regular payments. Please send your responses with examples of work to [email protected]
1 comment
Information
Dear reader, to leave comments on the publication, you must sign in.