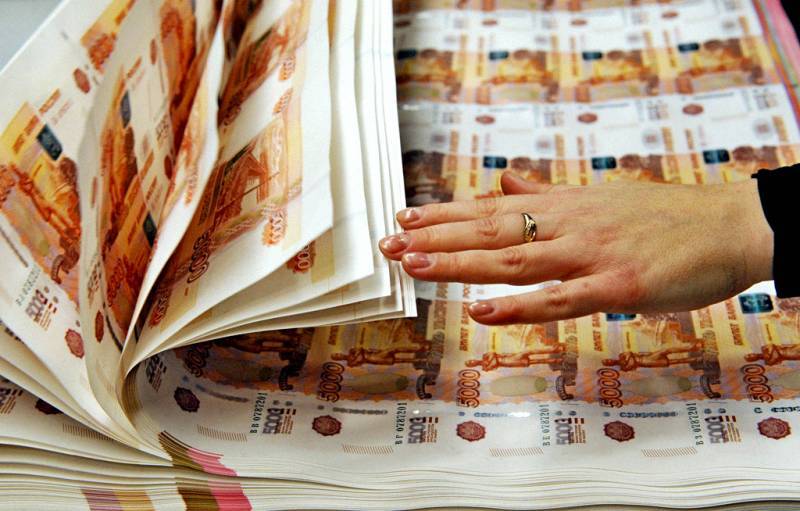 So it happened. At the highest level, it was decided to print the money box and start investing funds from the NWF. President Putin instructed the government to prepare a list of specific projects within a month. Who will win the battle for financial flows, liberals or statists?


The National Welfare Fund appeared in 2008 on the "ruins" of the Stabilization Fund, which was divided into two parts, and the Reserve Fund was almost completely depleted in 2018. The NWF is an integral part of the long-term pension scheme for citizens. It is formed by “cutting off” the super-profits of the federal budget from the sale of products of the oil and gas complex, as well as income received from the management of the fund's own funds. The latter are 80% placed on the accounts of the Central Bank of the Russian Federation, the remaining 20% ​​- in “other assets”. This is a huge amount of money, amounting to trillions of rubles.

Many independent experts and analysts have repeatedly pointed out that these colossal funds of the fund should be invested in the real sector of the Russian economics... However, in the way of these plans was the rule that investments are possible only after the liquidity part of the NWF exceeded 7% of the country's GDP. Accordingly, in any case, you will have to operate only with those amounts that exceed this threshold. And even in 2020, it was overcome, but money did not go into the economy. The reason was a furious undercover fight over these financial flows. Three different approaches were voiced.

The head of the Central Bank of the Russian Federation Elvira Nabiullina proposed to continue to accumulate funds in accounts, and at the same time to increase the threshold from 7% of GDP. The head of the Ministry of Economic Development and Trade Maxim Oreshkin made a proposal to buy foreign securities and develop foreign projects, lending to buyers of Russian products, primarily the energy sector, as well as organize production and service centers abroad. This idea was very well received by the representatives of the International Monetary Fund. Also, experts from the Higher School of Economics spoke in favor of foreign investment as more profitable. The third concept was expressed by the head of the RF Ministry of Finance Anton Siluanov. In accordance with his proposals, the funds of the NWF should have been put into infrastructure projects in Russia itself. And finally, we can mention the proposal of the head of the Accounts Chamber, Alexei Kudrin, to channel money from the reserve fund to directly support poor Russians in order to stop the growth in the number of poor people. But how many specifics were there in this proposal of one of the most prominent systemic liberals, and how much "hype"?

To all appearances, the third, statist approach won out. President Putin asked to present investment projects to him in order to launch them without delay:

I ask the government to submit concrete proposals for investing funds from the NWF within a month, including in infrastructure projects. And at the same time, of course, we need to talk about the projects being effective, cost-effective and in demand by business, the economy and the regions of the Russian Federation.
So, let's try to imagine what kind of projects they can be, and what exactly will public investment look like?

First of all, it should be borne in mind that the NWF will not fully undertake the entire financial burden for each project. From the explanatory note of the Ministry of Finance, it follows that the share of the fund's investments should not exceed 20%, and the profitability of the NWF from investments in infrastructure projects should not be lower than the profitability of government securities for the same time period. In other words, not every project will fit these strict criteria.

Which ones can correspond to them is easy to see on real examples.

Thus, the NWF has already acted as a co-investor in several large construction projects. For example, the Sibur company, with the financial support of the fund, launched Zapsibneftekhim, a petrochemical plant located in Tobolsk with a capacity of 2,2 million tons of products per year. Over a hundred domestic contractor companies took part in the project. The volume of government co-investment is estimated at $ 1,75 billion. The National Wealth Fund also actively participated in the launch of the ambitious Yamal LNG project. A liquefied gas plant with a capacity of 16,5 million tons per year and a seaport for its shipment by tankers to the markets of Southeast Asia, Japan, Vietnam and India were built. The share of NWF investments amounted to $ 2,3 billion. However, the interest of fund managers is not limited to the energy sector. Another 150 billion rubles were invested in the construction of the Central Ring Road. The Central Ring Road is a paid alternative to the Moscow Small Ring and is designed to relieve and optimize road traffic in the capital of Russia and the Moscow region.

So, based on previous experience, it can be assumed that the funds of the NWF will go to the development of energy and transport projects based on the principle of public-private partnership. It would also be highly welcomed to send them to the industrial production sector in order to implement the task of further import substitution. The situation is favorable for this: thanks to the increased oil prices, Russia will be able to receive from 200 to 250 billion rubles of super profits per month. It's time for the "petrodollars" to work for our country.
Ctrl Enter
Noticed oshЫbku Highlight text and press. Ctrl + Enter
We are
Kudrin wants to invest Russian reserves in the United States: what is the risk
Money ran out. The reserve fund of the Russian Federation cleared to the bottom
Reporterin Yandex News
Read Reporterin Google News
53 comments
Information
Dear reader, to leave comments on the publication, you must sign in.