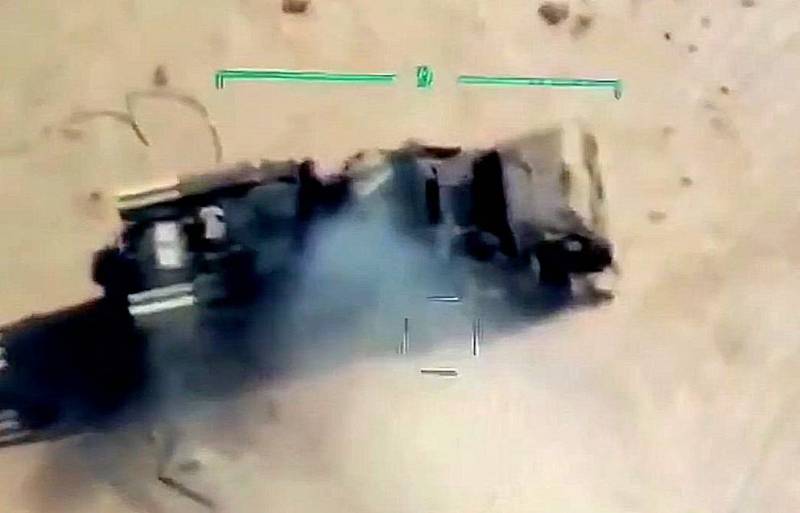 The wars in Syria, Libya, and then in Nagorno-Karabakh became the best advertisement for attack drones. UAVs of Turkish and Israeli production colorfully destroyed the armored vehicles of the Syrian government army, the army of Field Marshal Khalifa Haftar, and then the Armenians who defended Artsakh. At the same time, they also destroyed a number of Pantsir-S1 air defense missile systems, which called into question the effectiveness of Russian-made short-range air defense systems. However, over time, more and more information appears that allows us to look at this issue from a different angle.


So what do we have. On the one hand, there is Bayraktar TB2, a Turkish medium-altitude operational tactical unmanned aerial vehicle capable of staying in the air for up to 2 hours and carrying 12 UMTAS air-to-ground anti-tank missiles with laser guidance. There is also a variant equipped with Roketsan MAM-C, MAM-L corrected high-precision gliding bombs. During the battle for northern Syria, the confrontation near Tripoli and the 4-week war for Nagorno-Karabakh, "Bayraktars" proved to be a formidable weapon, effectively hitting enemy armored vehicles at a distance of up to 6 kilometers.

The production of these UAVs is carried out by Baykar Makina, owned by a relative of President Erdogan, businessman Ozdemir Bayraktar. In 2016, his son Selcuk married the youngest daughter of the "Sultan", and President of Azerbaijan Ilham Aliyev and Emir of Qatar Tamim bin Hamad Al Thani attended the wedding as honorable bones. We are deliberately pointing out these nuances, since the attitude towards Baykar Makina products will clearly be biased with a plus sign both in Ankara and in Baku. East is a delicate matter.

On the other hand, there is the Russian Pantsir-S1 air defense missile system. It is a self-propelled short-range air defense system designed to cover military and civilian targets. It is considered a "bodyguard" for the S-400 "Favorite" air defense system. This air defense missile system was created in close cooperation with the UAE with funds allocated by the Arab sheikhs. For this reason, a lot of "Shells" with the index "E" ended up in the hands of the army of Khalifa Haftar in Libya. It is no secret that the Emirates are one of the active sponsors of the Field Marshal. Taking into account the fact that Russian air defense systems were in service with the Syrian government army, the Libyan national army (LNA) and the Armenian army, the attitude towards domestic air defense systems on the part of our Middle Eastern "friends and partners" standing on the other side of these conflicts is clearly biased with a sign "minus". We will also have to take this nuance into account.

Let's go further. I would like to quote one without exaggeration of a great man, German Chancellor Otto von Bismarck:

They never lie so much as during the war, after the hunt and before the election.
In war, everyone always lies, overestimating the enemy's losses and underestimating their own. This is, in general, the norm, an element of disinformation and propaganda. Should the conflicts in Syria, Libya and Nagorno-Karabakh be an exception to this rule? Why would you?

Last summer, the Ukrainian publication "Defense Express", calling itself "Vіyskovy portal", told the world that Turkish attack UAVs in just a few years destroyed at least 23 "Shells" in Syria and Libya. To suspect an "information and consulting company" specializing in highlighting the achievements of the military-industrial complex of Ukraine, its weapons and military equipment, in sympathy or at least an objective attitude towards Russia and its military-industrial complex, is not possible. Also, the reports of huge losses of Russian-made air defense missile systems from the Turkish Anadolu agency are not particularly credible.

No, we will not deny the very fact of the destruction of several Pantsir-S1 complexes of the Bayraktar UAV. There was a case, and there are several explanations for this. In particular, the low level of training of local Arab settlements. In more skillful hands, anti-aircraft complexes showed themselves much better. The question is in the number of actually knocked out air defense missile systems and downed UAVs following the results of their confrontation. These figures are openly embellished in favor of the Turkish side, which is not surprising. But there are also other views on this issue.

For example, a certain resonance was caused by publication American "fan of military technology" Jeff Jaworski (Jeff Jaworski). He counted, with reference to his own sources, a completely different amount of destroyed equipment. According to him, in Libya, the Turks were able to knock out only 9 Russian-made air defense missile systems, and they, in turn, knocked down 47 Turkish Bayraktar TB2s. If we take into account the comparative cost of "Armor" and attack UAVs, then the LNA even won, if, of course, we take the death of the calculations aside and count it like an accountant. 9 air defense missile systems cost the purchasers $ 118 million, and 47 UAVs - $ 245 million.

Of course, the private opinion of the American "fan of military technology" cannot be considered the ultimate truth. But all the more, it cannot be the openly biased position of the Ukrainian publication "Defense Express" or the Turkish "Anadolu". It so often happens that the truth is gradually selected from under the heap of information and propaganda slops poured on it. It is quite possible that this is exactly the case. Time will tell.

Let's make a reservation that we do not question the effectiveness of Turkish or Israeli attack UAVs. They did really well against an unprepared opponent. But the fact of the matter is that they work well only where there are no modern anti-aircraft systems with highly qualified experimental calculations. The main area of ​​application of such attack drones in reality is mainly regional or local conflicts with a relatively low intensity.
Ctrl Enter
Noticed oshЫbku Highlight text and press. Ctrl + Enter
We are
Why ZRPK "Shell-S" in different ways proved to be in Syria and Libya
Ten "defeats" of Putin
Reporterin Yandex News
Read Reporterin Google News
11 comments
Information
Dear reader, to leave comments on the publication, you must sign in.