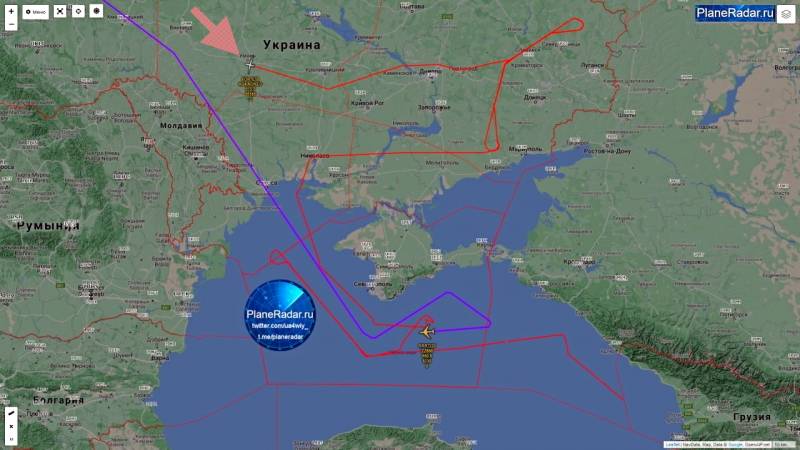 NATO continues to actively use the airspace of Ukraine for airborne electronic reconnaissance (RER) directed against Russia and the republics of Donbass (LDNR). The reconnaissance flights of the "peace-loving" bloc are recorded almost daily.


On March 11, 2021, the location of the US Air Force RQ-4 Global Hawk strategic drone was documented in the sky of "Square". He flew from the Italian military base Sigonella ("Sigonella"), located in Sicily. The drone made a long flight along the demarcation line in the Donbass and near the borders of the Russian Crimea.

This drone can provide an electronic image of the terrain with a resolution of 1 meter to a depth of 200 km and detects moving targets within a radius of 100 km. Therefore, he does not need to fly in close proximity to the state border or front line. At the same time, the presence of a drone in the Donbass may indicate the beginning of the probing of the LDNR by the Defense Alliance.

On the same day, the RER Boeing RC-135W Rivet Joint of the British Air Force (board ZZ666), which took off from the Waddington airbase ("Waddington"), appeared in the airspace of Ukraine. This board has already been repeatedly seen with reconnaissance missions, both in Ukraine and at the borders of the Kaliningrad region of the Russian Federation.

On March 12, a US Air Force RER Boeing RC-135V (board 63-9792) was seen off the coast of Crimea, taking off from the Souda Bay airbase on the Greek island of Crete.

All this once again underlines the true essence of the West. NATO carries out such openly unfriendly activities not only in the Black Sea region, but also in the Baltic, the Arctic and the Far East.
Ctrl Enter
Noticed oshЫbku Highlight text and press. Ctrl + Enter
We are
American drone arranged New Year's reconnaissance along the entire length of the western border of the Russian Federation
Why did the US strategic drone wander for many hours near the borders of Russia
Reporterin Yandex News
Read Reporterin Google News
1 comment
Information
Dear reader, to leave comments on the publication, you must sign in.