Western analysts' options for a "post-like future": one darker than the other 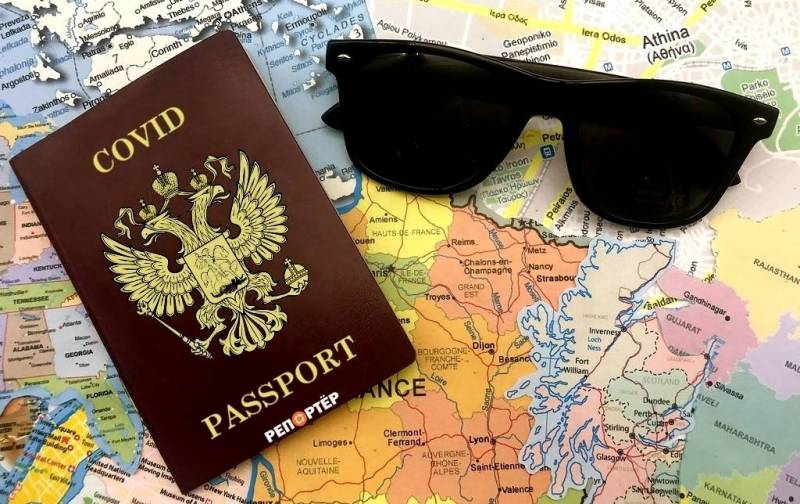 While in some countries the vaccination of the population against coronavirus is already in full swing, others are just beginning to start this process neither shaky nor badly. Still others would be happy to "prick and forget", but there is nothing - there is no vaccine of their own production, and "rich Buratins" are in no hurry to share their reserves. Thus, in our world, one more "rift" begins to form before our very eyes.


Now the division of its inhabitants into "clean and unclean" will be carried out according to the principle: "had been ill - not been ill" and "vaccinated - not vaccinated." In the West, where talks about the introduction of "ausweisses into a new life", which have the working title "covid passports", have been going on for more than a year, forecasts are being made as to what such a division will turn our life into. Let's face it - they are far from being rosy ...

Between dictatorship and chaos

The spectrum of possible probabilities of the "post-like future" is quite wide. For example, experts recruited by the American multimedia publication Politico, which specializes in political analysts, counted at least six of them, and with a fairly large spread. However, almost all analysts assess the variant of a pastoral and popular “tomorrow” in which the governments of at least most of the states of the Earth unite in a single impulse to combat the pandemic and its consequences, ranging from “utopian” to “ridiculous”. Yes, one can dream that citizens of at least "developed" countries will receive all the necessary medical care (and even beyond that - up to free tests that they can use right at home), as well as social and material support from their governments at a sufficient level ...

After that, the world powers will go hand in hand to save the orphan and the poor - the countries of the "third world", whose economic the coronavirus has worsened the problems to the limit. However, the harsh realities of life have already clearly enough demonstrated the absolute impossibility of such a scenario. All that remains is to rephrase the adage that was in use before the pandemic: "one's own vaccine is closer to the body" and come to terms with the fact that the ideas of "global mutual assistance" and "universal solidarity" turned out to be a completely empty phrase even in the face of such a serious threat as COVID-19. Most likely, the situation will develop exactly the opposite - "covid passports", the appearance of which realist experts predict by the middle to the end of this year, albeit not everywhere, will become the basis for a new system of global segregation. Do you want to live like a human being - to have a decent job, normal leisure time and the opportunity to travel? Get vaccinated! Do not want? You have no place among a civilized public! Can not?! Well, I'm sorry ... and get out of here.

The need for total control over the observance of many restrictions and prohibitions, according to Western analysts traditionally concerned with the "preservation of democratic values", will almost inevitably cause a sharp increase in the monitoring and repressive functions of those states that put the principle of "not vaccinated - not human" at the forefront. Creation of a "coronavirus police"? Why not? Moreover, in conjunction with the introduction, according to the European tradition, of furious fines for violations of the rules, such a structure will pay for itself quite quickly. In turn, this simply cannot but generate a response from the forced outcasts and pariahs of the XNUMXst century. Their ranks will be joined by categorical opponents of any vaccinations, as such, and those who will not be able to get a "pass to a new life" in the form of a life-saving injection due to, say, immunity disorders or other characteristics of their own body. And here you can expect anything - from the creation of clandestine nightclubs and other leisure facilities for the unvaccinated to the emergence of more or less massive social, and, in the future, political movements against "covid-apartheid". Unlikely? How to say.

Last month, for example, in France, for example, protesters were already seen wearing an exact copy of the yellow "stars of David" that the Nazis forced Jews to wear in the ghetto, with the inscription "unvaccinated" placed inside these signs. The trouble has begun ... In turn, governments may well be able to use quarantine restrictions to suppress protests and isolate certain groups of the population, such as, for example, migrants in Europe. Thus, humanity will be balancing on the verge between “covid dictatorship” and “covid chaos”. At the same time, living in conditions that cannot be called normal.

The most serious problem is that despite all the talk about the development of certain common criteria, strategies and approaches, each state is confronting the pandemic in its own way, using its own tools and mercilessly criticizing neighboring ones. To begin with, the vaccination campaign is carried out with completely different vaccines. This alone already creates conditions for many collisions and problems. For example, it has recently become known that Israel flatly refuses to recognize the "scorched" filth with which Ukrainian citizens are injected today under the CoviShield brand. They are not going to be considered vaccinated in the “promised land”. In some European countries, scandals around the drug AstraZeneca are flaring up today - as far as is known, Italy, Denmark and Norway have stopped doing vaccinations. In principle, under current conditions, any state can declare vaccinations made in a particular country "wrong" and refuse to accept its citizens on its own territory or pass them through it. Isn't it a great way to settle accounts unrelated to the coronavirus?

And, by the way, one should not at all forget about the problems of a purely, so to speak, technical nature, which, nevertheless, can turn the lives of hundreds of thousands and millions of people into hell. What can be "covid-passports" in kind, so to speak? A paper booklet, a piece of cardboard with your photo, signatures and stamps? It is highly doubtful. This is actually the day before yesterday, and such "documents" will be forged not only in large quantities, but everywhere. Most likely, as practice shows, including domestic, it will be a software application installed on a smartphone and available for updating and adjusting from the outside. Consequently, those who do not have this gadget for one reason or another will be deleted from life by definition ...

However, the owners of "smart" devices can face a lot of troubles. Are you waiting for, for example, a transfer from flight to flight at an international airport? Great ... We are glad to see you, but you will not board our liner. What does it mean: "there is an application" ?! Sorry, but our airline has something else in use. How do I know how to install it? Is the "tube" discharged ?! Well, leave our restaurant immediately! Charge - you will come ... These are just the smallest problems of a purely everyday level that will be inevitable in the world with “covid passports” and “covid passes”. There is no doubt that they, and much more serious incidents, as a result of which people will disrupt serious business negotiations, or even larger plans for life, will generate a huge wave of litigation. In them, the defendants will be both numerous transport companies, catering and trade enterprises, and, above all, the state that approved and blessed the policy of "coronavirus separation". After all, nothing of the kind is spelled out in the legislation of the same countries of the European Union, which until now have been striving for maximum openness.

At the same time, it is extremely doubtful that they would have time to change it super-operatively. After all, this will have to be done up to the level of the Constitutions, to which, without a doubt, the lawyers who defend the rights of their clients, whose fundamental rights and freedoms have been violated, in fact, are completely illegal, will begin to appeal. And, by the way, what to do with situations when, as a result of the emergence of new strains of COVID-19 (detected, as practice shows, quite regularly), previously issued "certificates of purity" will turn into natural phrases of letters?

Humanity today runs the risk of being drawn into an endless run along the quarantine-vaccination circle, adding to the objective problems brought by the pandemic (increased mortality, excessive burden on health care, destruction of the economy), also subjective problems caused by attempts to grasp the immensity and cram ... Well, you understood. At the current rate of vaccination, which in Russia amounts to 110-130 thousand people a day, it practically does not lag behind the leading countries of the world in this matter. Yes, the United States, or, even more so, Israel is ahead of us here. But the gap is not that great with respect to the leading European countries. According to one of the expert estimates, it will take about a year and a half for half of our fellow citizens to obtain immunity (if we do not "push it"), while Germany, with its much smaller population, should keep within 220 days. By the way, the same Ukraine will need ... a quarter of a century to achieve such an indicator! However, not her alone. This carries the risk of turning certain countries of our planet, or even entire regions of it, into "covid ghettos" with extremely unpleasant consequences both for those who fall into these "reservations" and for their neighbors. Peace and quiet on Earth will definitely not be added to this ...

The only, perhaps, optimistic scenario among all that is being worked out today, can be considered a forecast within which humanity, moving away from the "coronavirus psychosis", will begin to regard this virus (which by that time will probably lose its lethality pretty much) at the level of ordinary seasonal flu epidemics. In this case, if the disease is fought without blocking the whole world with quarantine "slingshots" introduced in the name of resisting it and without putting the lives of people and entire countries completely dependent on the presence or absence of vaccinations, the inhabitants of the Earth will have a real chance to return to normal life. And not to exist in one of the eerie "post-like" dystopias.
Ctrl Enter
Noticed oshЫbku Highlight text and press. Ctrl + Enter
We are
President's time: what kind of watch does Putin wear?
Where is Russia going?
Reporterin Yandex News
Read Reporterin Google News
5 comments
Information
Dear reader, to leave comments on the publication, you must sign in.