Russia faces a direct threat in the North 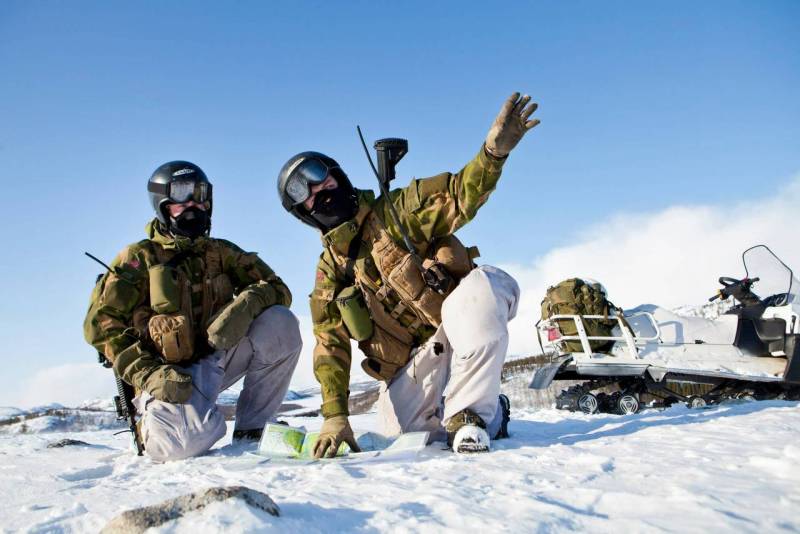 Norway has never occupied the place of a historical enemy in the Russian public consciousness, which makes it significantly different from Poland, Sweden or, say, Turkey. On the contrary, they often recall that in 1905 the Russian Empire was the first in the world to recognize the independence of the Scandinavian kingdom, and a few decades later the Red Army liberated the territories of the Norwegian Arctic from the troops of Nazi Germany.


However, it was the German invasion in 1940 and the long occupation during the Second World War that subsequently prompted the Norwegian government to abandon formal neutrality and become one of the founding countries of NATO.

The Norwegians feared a Soviet invasion for the same reason that provoked the German invasion earlier - this territory is critically important in the context of control over the North Atlantic. It is no secret that in the event of the outbreak of war in Europe, the task of a significant part of the long-range aviation of the USSR, as well as a fair share of the Northern Fleet, would be the search and destruction of Atlantic convoys and aircraft carrier formations going from the New World to help the Old. The routes of ships, submarines and bombers passed by the coast of Norway, which made the occupation of this country by the Soviet Union almost inevitable.

Understanding this, Oslo became one of the most active members of NATO during the Cold War, and acted as the most loyal allies of the United States on a European and global scale. It is worth giving a couple of examples for clarity. The famous Francis Powers, shot down over the USSR on May 1, 1960, made a reconnaissance flight on a U-2 plane from Peshawar (Pakistan) to Bodø, Norway. In addition, the kingdom has hosted the towers of the American Loran-C radio navigation system.

Taking an initiative in such programs, the Norwegian government apparently believed that it was increasing its importance in the eyes of the allies, accumulating guarantees that in the event of an invasion from the east, they would not be abandoned.

After the well-known events of 2014, the Norwegians returned to the old tried and tested tactics from the era of confrontation between the two systems, willingly sacrificing relatively good-neighborly relations with the Russian Federation in order to demonstrate unity with their allies in Western civilization. This is their choice and must be respected, although it does not in any way negate the military and political consequences.

The recent aggravation of relations caused by the arrival of American strategic bombers B-1B Lancer in the Norwegian part of the High North is only the latest in a series of events where Oslo is willing to raise rates. Earlier, such steps were the training of American servicemen in the northern regions of the country or last year's campaign of the warships of the Scandinavian monarchy together with the Anglo-American squadron to the shores of the Russian Federation.

However, it is believed that by blindly repeating the Cold War pattern, Norwegians sincerely do not understand that circumstances have changed significantly. For example, the Northern Sea Route, the blockade of which was demonstrated by the aforementioned NATO naval exercises, is of much greater importance for the modern Russian Federation than it was even for the USSR.

In the context of the gradual abandonment of hydrocarbons by some states and sanctions against the Nord Stream-2 gas pipeline, the Russian Federation is trying to find its new economic niche. One idea is that Russia should act as an alternative to the traditional trade route from Europe to Asia and vice versa. The one that goes through the Strait of Malacca, the Indian Ocean and the Suez Canal.

The Kremlin has two such projects today. The Northern Sea Route and the North-South International Transport Corridor. Each of them has its own advantages and disadvantages, however, on the whole, both of them can serve as a very good economic and geopolitical asset for Moscow. Russia has already managed to make multi-billion dollar investments in both directions, with plans to invest even more funds.

However, in September 2020, a kind of blow was dealt to each of the transit projects.

First, in the north, the combined forces of the United States, Great Britain, Denmark and, in fact, Norway conducted demonstration naval exercises, coming unnaturally close to the traditional possessions of the Russian Federation.

And then, on the other end of the continent, the second war for Nagorno-Karabakh began, the outcome of which is well known. If earlier Azerbaijan was considered a reliable partner in the North-South corridor for Russia, then in the light of the changed geopolitical situation and the strengthening of Turkish influence, there is no longer the former unconditional confidence in this.

Since long-term uncertainty has arisen in the Transcaucasus, the Northern Sea Route and the accompanying development of the Arctic, presumably, will become a higher priority for Russia. And, therefore, there will be a more urgent need to rebuff any Norwegian attacks.

Thus, the reason for the escalation is objectively the specific interpretation of their own interests both in Oslo and in Moscow, based on the geopolitical realities of each country. The interests of the neighbor, due to the degradation of analytical institutions, each of the opposing sides does not want or cannot see - considering them overt imperialism or dangerous adventurism.

In Norway itself, the authorities and mainstream publications and TV channels are actually promoting the opinion that the worse relations with the Russian Federation are, the better. For this is how the Scandinavian kingdom will receive more help from the United States and Great Britain and other allies. The collapse of relations with the largest neighboring country in this coordinate system is seen as an annoying but necessary sacrifice.

After all, as the Norwegians like to write, these are the "Russians who first started." Our neighbors do not like to remember that six Norwegian F-16s took part in the aggression against Yugoslavia in 1999, and on March 28, 2008 Oslo unilaterally recognized the independence of Kosovo. "Elves" are known to be infallible.

And, judging by the comments of readers on the Internet, this position has some support among the Norwegian population. Although, of course, there are those who understand that such logic is dangerous, because one day with provocations you can go too far and the scenario about the invasion of "bad Russians" is a harsh reality. Just a self-fulfilling prophecy.
Ctrl Enter
Noticed oshЫbku Highlight text and press. Ctrl + Enter
We are
Ukraine from the inside: traitors, curators and those who watch from the Kremlin
Ten "defeats" of Putin
Reporterin Yandex News
Read Reporterin Google News
6 comments
Information
Dear reader, to leave comments on the publication, you must sign in.