UDC for the Russian Navy: Necessity or Blind Imitation? 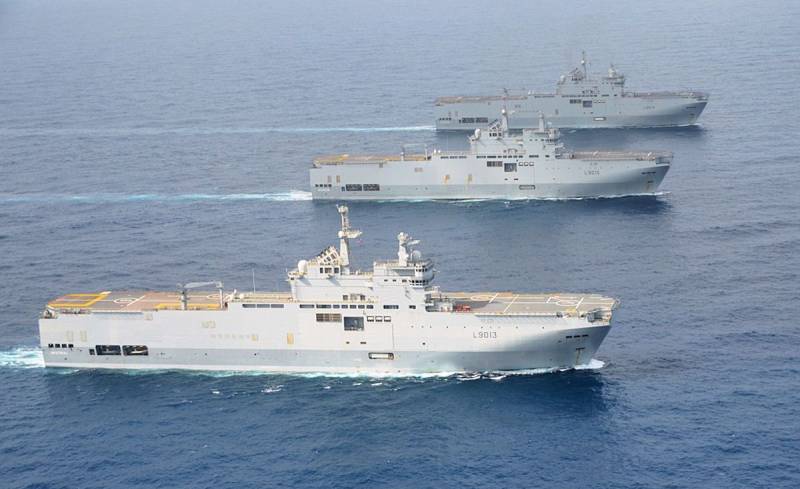 Troika UDC of the Mistral type. The receipt of these French ships by Russia was prevented policy

The network community is seething: the unexpected laying of two new ships for our Navy caused a real storm of discussions, and, alas, they are rather negative - the leadership of the fleet is actively criticized for building "unarmed troughs", suitable, in the opinion of many, only "for colonial expeditions." ...

Of course, this point of view is absolutely unfair, and it was born largely due to banal illiteracy - here it is worth noting that the UDC as a class in our fleet was previously absent, and all "aircraft carrier" causes a sharp rejection and distrust - unfortunately, experience exploitation of "Admiral Kuznetsov" was not very successful, and all Soviet achievements in this area for many remain little more than little-known myths of the past.

In order to rectify the situation and show the readers exactly how the universal amphibious assault ships are useful for the Russian Navy, I propose to start with a brief explanation that will give us an understanding of what kind of beast we are dealing with; When opponents of any aircraft-carrying ships appeal to their "uselessness", they should ask themselves a reasonable question - do our armed forces generally need aviation, or can we get by with the notorious missiles of all shapes and sizes?

Of course, a proposal of this kind looks like an absurdity, but for some reason it looks quite logical in matters of the fleet - of course, only from the point of view of its opponents. When criticizing aircraft carriers and helicopter carriers, one should never forget that these are mobile take-off pads and airfields, which are vital for any naval operations - unfortunately, this simple fact remains beyond the understanding of all kinds of critics.

So, let us once again highlight the main thesis: an aircraft-carrying ship is the possibility of operational deployment of our fleet's aviation on a mobile take-off site, which is the universal amphibious assault ships laid down in Kerch. 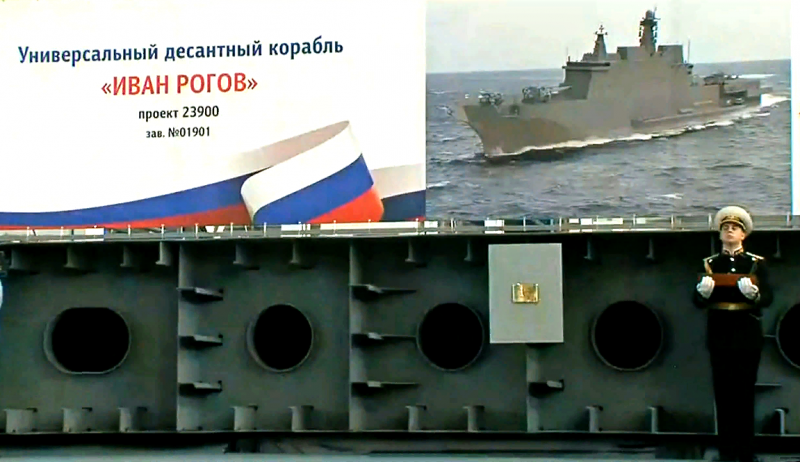 From this we can draw the following conclusion: the combat power and combat value of such a ship depends entirely on its air group. The variation of based aircraft gives us the ability to vary the capabilities of the helicopter carrier itself: from anti-submarine to attack. In the case of the ships of the 23900 project, it is precisely this functionality that we are talking about: despite the embarrassing word "landing", we first of all have a combat unit capable of providing fire cover with assault helicopters or fighting enemy submarines, which, of course, can at times to expand the capabilities of our Navy.

At the moment, attack Ka-52K and anti-submarine Ka-27 in the amount of 16 pieces are declared as the main types of helicopters based on UDC; it was also repeatedly mentioned about the possible basing of the UAV - a similar news can not but rejoice, because the presence of unmanned aircraft will significantly expand the reconnaissance and patrol capabilities of the ship. 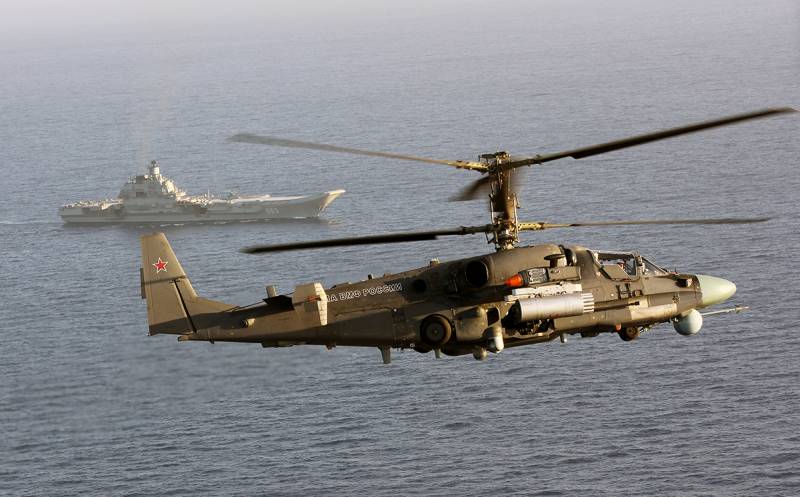 Ka-52K can serve as a carrier of both anti-ship and cruise missiles
Of course, the potential functionality of the UDC is even more extensive: here it is not worth both to sweep aside the Soviet experience of using the Ka-25Ts AWACS helicopters, and to forget about the presence of the Kh-52 cruise anti-ship missiles in the Ka-35K arsenal - all this dramatically expands the scope of the helicopter carrier's activities in the sea. , which is perfectly confirmed by the experience of the British-American forces in 1991, when a Coalition Navy helicopter detachment almost completely destroyed the retreating forces of the Iraqi Navy, using external target designation to guide anti-ship missiles.

Thus, having examined the capabilities of the UDC a little more closely, we will see that the ship is being transformed from an "unarmed trough" into an incredibly useful floating operational base. At a minimum, its functionality can be summarized with a similar list:

Thus, a helicopter carrier can become a powerful nucleus of any battle group - and this is especially useful in the light of the small size of the naval personnel of the Russian Navy. Moreover, a vessel of this type can eliminate a number of chronic problems of our fleet, such as, for example, the limited ability to issue target designations to enemy surface forces; close the gap in weak mine action equipment and reinforce anti-aircraft weapons in any potentially threatening direction.

Of course, a helicopter carrier cannot be viewed from the standpoint of "absolute weapon" - it is an extremely useful multifunctional ship, but not a superweapon that can dramatically change the strategic balance of forces. The UDC can be viewed as a symbol of the revival of our fleet, and the revival of a healthy one, devoid of meaningless concepts and excesses - we will finally see a large modern ship capable of ensuring the combat stability of the Russian Navy in any theater of naval combat operations; a ship capable of operating both in the near and in the far sea zone, which is critically important for the operational capabilities of the Navy: tactical landings, hunting for enemy SSBNs, providing special operations and displaying the flag off foreign shores - and this is only a small part of the functions that will be taken on our helicopter-carrying ships.

However, it is worth adding a fly in the ointment - unfortunately, at the moment Russia has serious difficulties associated with the creation of naval air groups; First of all, it is worth mentioning the very uncertain situation with domestic marine multipurpose helicopters: at the moment there is no modern helicopter platform in the country, similar, for example, to the American Sikorsky SH-60 Seahawk - the production of the Ka-27 was discontinued, and the existing machines need serious modernization ... The machines used by the army aviation are unsuitable for basing on the UDC (both size and a number of missing technical features, for example, folding blades, affect) - and without a multipurpose helicopter, the capabilities of the ship itself are seriously reduced. Separately, it is also worth mentioning that our naval pilots have extremely modest practice and flying time, and conceptually, the Russian naval aviation is in serious decline - all these are undoubtedly solvable problems, but their solution will take a lot of time - otherwise, they will be useful. from the presence of universal amphibious ships in the Navy, it will be possible to designate as extremely insignificant.

Certain questions are also raised by the statements about the presence of unmanned aircraft on board the helicopter carrier: unfortunately, we have no information about the type and tasks that will face these machines; conceptually, the use of UAVs is seen primarily as reconnaissance and patrol officers, but the probability of basing the promising S-70 Okhotnik significantly expands the range of use of this type of weapon - up to providing air support for special forces and striking enemy aircraft. However, these fabrications still remain a theory - it remains only to hope that the leadership of the Navy will be able to overcome the inertia of thinking and the traditional Russian distrust of UAVs, allowing the machines to take root on the decks of ships.

It should be noted that at the moment there are real projects of UAV carrier ships. For example, Turkey plans to equip its universal amphibious assault ship TCG "Anadolu" with exceptionally heavy attack drones - within the framework of this concept, the aircraft manufacturer Baykar Makina (famous in the light of recent events for its Bayraktar TB2 and Bayraktar AKINCI) has begun work on a promising vertical takeoff and landing vehicle ...

One way or another, but of completely ready for production and deployment of aircraft for the UDC, Russia has only the Ka-52K helicopter - a machine, of course, amazing, but extremely highly specialized; unfortunately, her outstanding, but exclusively percussion functions severely limit the capabilities of the ships themselves. However, "Katran" is absolutely indispensable for supporting tactical landings, fighting small enemy ships (for example, missile or patrol boats) and as a carrier of anti-ship missiles.

One cannot fail to mention the "highlight" of our military-industrial complex - the Ka-31 radar patrol helicopter. This machine has a positive operational experience both in the Russian Navy and in the naval forces of India and China; in addition, it is a ready-made and mass-produced sample that can incredibly expand the capabilities of our helicopter carriers in the absence of carrier-based AWACS aircraft and a serious shortage of their ground-based “colleagues”. 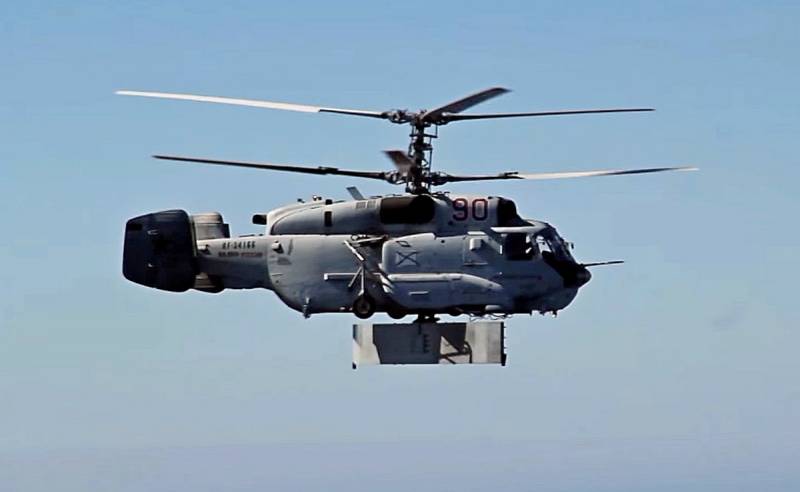 Helicopter AWACS Ka-31 - the future "sharp eye" of our helicopter formations
In the light of the data known to us, it remains to be hoped that by the time our helicopter carriers are put into operation, the problems with filling the air group will be resolved; As the most practical solution, the production of modernized Ka-27 helicopters literally suggests itself, which should form the backbone of Russian carrier-based aviation - otherwise, the range of useful functionality of Project 23900 ships will be seriously limited exclusively by strike missions and naval tactical assault forces.

For the rest, of course, the leadership of the Navy acted extremely wisely - it is impossible to create a powerful and functional navy without building its core; It is precisely such a core that the UDC of project 23900 will become - the key combat units around which it will be possible to form strike groups for operations in the far sea zone - our naval forces will be able to operate far from the sea borders and the coast of Russia, conducting not only defensive military operations, but and operating on the sea communications of a possible enemy.
Ctrl Enter
Noticed oshЫbku Highlight text and press. Ctrl + Enter
We are
Space shield of the Motherland: the West is not in vain afraid of Russian inspector satellites
New weapons on the way: What is known about the anti-satellite complex "Burevestnik"
Reporterin Yandex News
Read Reporterin Google News
12 comments
Information
Dear reader, to leave comments on the publication, you must sign in.