"Spring aggravation": what kind of game Kiev started in Donbass 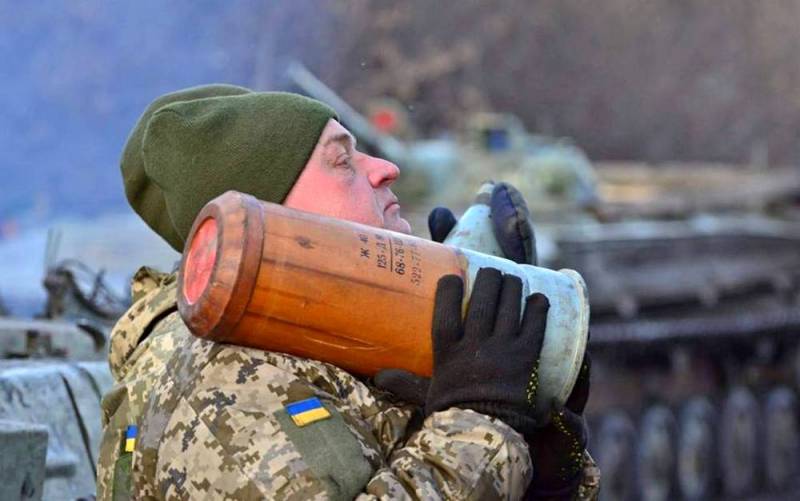 One of the most discussed topics today is the sharp deterioration of the situation in the East of Ukraine. The shaky truce was replaced by regular and massive shelling by the Armed Forces of Ukraine, to which the defenders of the Republics are simply forced to respond adequately. If events continue to develop in the same vein, it will inevitably come to direct clashes, which, in turn, may develop into full-scale military operations.


Who needs everything that happens and why? Indeed, both sides of the contact line are well aware that the return of the situation to its "hot" phase of the 2014-2015 model will not bring anything good either to Kiev, Donetsk or Luhansk. Most importantly, a new escalation will definitely not lead to the final victory of one of the parties. The same idea is shared by all experts, without exception, who assess today's events. However, the clue to their meaning should rather be sought not in the military, but especially in political the plane.

An order has been given from Washington ...

The fact that in making more or less serious decisions both in the field of its own domestic policy, and, even more so, on the foreign policy "front", any "post-Maidan" government of Ukraine is completely dependent and exactly 100% depends on instructions coming from outside, not the slightest is beyond doubt. Consequently, this is also the explanation for the current exacerbation in the Donbass. Moreover, this should be considered only in the context of all the other sharp "body movements", in the multitude made by Kiev in recent years. So what's really going on? First of all, Vladimir Zelensky, in whom many very recklessly saw a figure capable of finding a way, if not to the resolution of the civil conflict that has been going on in the country since 2014, then at least to its de-escalation to the stage when the parties can conduct at least some negotiations and to solve at least the most pressing issues, he began to pursue a policy that is absolutely opposite to these hopes.

Moreover, one cannot even simply say that in his political course he turned into an exact copy of his own predecessor, Petro Poroshenko. In some ways, the comedian has already far surpassed the "gray hetman" - under Poroshenko there was no such large-scale "witch hunt" with the closure of opposition TV channels, attempts to carry out a total "cleanup" of the Internet, the introduction of sanctions against objectionable politicians and the like. Petr Alekseevich, for all his narrow-minded aggressiveness, was afraid of the West's condemnation like fire, and therefore kept at least some framework. Zelensky, on the other hand, rushes ahead, turning into a small and evil dictator with oily eyes and a honey voice. And if he allows himself this, it means that there is a "good" from the owners.

The fact that now Kiev is completely "manually controlled" from Washington, and, to a somewhat lesser extent, from London, proves many completely insane, at first glance, actions of its leaders. Refusal of both Russian and Chinese vaccines and purchase for vaccinations at a frenzied price of the more than dubious drug with British "roots" CoviShield, supplied by the British company Crown Agents ... Sich ", the deception of which could cost Ukraine $ 5 billion and a complete rupture of relations with the main trading partner - China ... Participation in numerous provocations against the legitimate authorities of Belarus and training militants for the local" Maidan "- to the detriment, again, of one of the main directions of foreign economic cooperation ...

The “rocking of the situation” in Donbass is probably a link in the same chain. This is just a blind adherence to the command received, which is carried out without even thinking about the possible consequences. However, the "carrot" for Zelensky in this scenario is still provided. Obviously, in exchange for his complete loyalty, Washington has taken seriously the most significant Ukrainian oligarch, Igor Kolomoisky, who for some time considered the new head of state to be his “pocket” politician. Let me remind you that in order to perceive the political picture of “non-existent” in a true and not ostentatious form, it must be viewed through the prism of the relations between the oligarchic clans there, and not in any way “pro-government” and “opposition” parties, which are absolutely worth each other in terms of corruption and low social responsibility. The "Maidan" against Yanukovych was unleashed by the oligarchs, not the State Department, which simply joined in the already begun event. Zelensky, with the help of American "partners", is trying to protect himself from such a scenario.

Will there be a war? No, there will be trades

Does the United States want a full-scale armed conflict in Donbass, in which Russia will intervene with almost XNUMX% inevitability? More likely no than yes. Evidence? Excuse me: first of all, the current head of the White House, who supervised Ukraine very closely during the time of Barack Obama, has always been a consistent and categorical opponent of the "big war." Another point: during the announcement by Pentagon officials of plans to provide military assistance to Kiev this year, a specific statement was made: Javelin MANPADS are not included in this number. If Washington were planning to throw the Armed Forces of Ukraine on the offensive on Donetsk and Lugansk, they would probably have thrown some number of these complexes on them - both to raise the general "fighting spirit" and to shoot a spectacular video about how dashing these MANPADS are hit by "rusty Russian tanks". It would not have been possible to organize an appropriate statement of problems ... Well, and, finally, the main thing is that the United States does not need a military clash in which the Armed Forces of Russia (especially with a completely predictable result) will participate. Especially now, when the Kremlin has very convincingly and unequivocally demonstrated its intentions to follow its own course, paying absolutely no attention to the shouts from the West.

Suppose the Armed Forces of Ukraine will try to carry out a "general offensive" in the Donbas using all available forces and means, up to the remnants of military aircraft and tactical missile weapons. In this case, the scenario of 2008 will most likely repeat itself, but the consequences for Kiev will be much sadder than for Tbilisi. It is unlikely that Moscow will allow a repetition of its own mistakes made then ...

What's next? New sanctions? Let's go ... This topic is not even worth wasting time on discussing it. NATO intervention in the armed conflict on the side of Ukraine? Even more incredible. So why, in this case, Kiev stubbornly and consistently "warms up" the situation, increasing confrontation? Most likely, the final goal, so to speak, the maximum program, in which the interests of both Ukraine and the United States fully intersect, is the global reformatting of the entire negotiation process on Donbass. The "Minsk agreements", which are an absolutely impossible burden for both sides, Kiev has been threatening to "revise" a long time ago. In fact, no one will "revise" anything - these agreements, which have completely turned into empty pieces of paper, will simply be torn up and thrown into the trash. About the same fate awaits the "Normandy format", from which neither Kiev nor Moscow nor Donbass is hot or cold. In Ukraine, they clearly understand that Berlin and Paris are still “helpers” in the matter of "pressure" on Russia. Merkel is quite naturally shaking over the "Nord Stream-2", Macron talks about the "death of the brain of NATO" and the need to improve relations with Russia ... Whether Britain and the United States! These Russians will exhaust all the veins, they will not concede anything to them and will "press" to the last.

Surely in Kiev today they think in this way. However, “Minsk” and “Normandy” simply “take and abolish”, without finding themselves immediately in the role of the perpetrators of the disruption of the peace settlement process, also cannot. I bet that escalation in Donbass is the first step towards a sharp, but "point" aggravation of the conflict, which should be followed by the notorious "reformatting". Victims among the Ukrainian military and civilian population (from the "Ukrainian" side, of course), the "picture" correctly submitted by CNN, recognition by the OSCE as an organization that was unable to prevent bloodshed and the outbreak of war ...

And then Washington comes into play, whose representatives will be able to “resolve the crisis situation”, earning the laurels of “peacekeepers”, at the same time shaming European diplomacy and firmly “staking out” for themselves the right to further conduct business in Donbass. The United States has probably already appointed a new "special representative" on the relevant issue, but rather a whole group of "negotiators" whose main task will be to "twist Moscow's hands", and not only about Donbass and Ukraine. In such a vile and bloody way, the United States wants to create a "communication platform" for interaction with our country from, as they believe, advantageous positions. Ukraine seeks to get rid of the tired "Minsk-2", return to sweet dreams of "de-occupation" and simply follows the instructions ...

Based on all this, with the highest degree of probability it can be assumed that no "general offensive" will happen. Donbass will be tormented just enough to provoke a more or less weighty response, while by no means reaching the dangerous line beyond which Russian military columns marching to the West will loom on the horizon. I want to note that today in Kiev all the steps are being taken that are necessary precisely to move in this, and not any other direction. For example, the local parliament is now considering bills No. 4060, 4641, 4642, according to which all citizens of the country "who have not declared the presence of dual citizenship of the aggressor state" are subject to unconditional prosecution - from paying huge fines to imprisonment for 5 years. If they are accepted, the threat of reprisals will hang over all 350 (or, according to other sources, 400) thousand residents of Donbass who already have Russian passports. What is not a wonderful reason for blackmail in the process of further "negotiations"?

So it hardly makes sense to compare the forces and means of the Ukrainian Armed Forces corps pulling towards the contact line with the potential of the Donbass defenders. Before us, most likely, is not the eve of a major offensive operation, but the first phase of a cunning foreign policy "spectacle" started by Ukraine and the United States. In any case, Moscow will have to react to these actions, but hardly on a military level.
Ctrl Enter
Noticed oshЫbku Highlight text and press. Ctrl + Enter
We are
Ukraine from the inside: traitors, curators and those who watch from the Kremlin
Ten "defeats" of Putin
Reporterin Yandex News
Read Reporterin Google News
8 comments
Information
Dear reader, to leave comments on the publication, you must sign in.