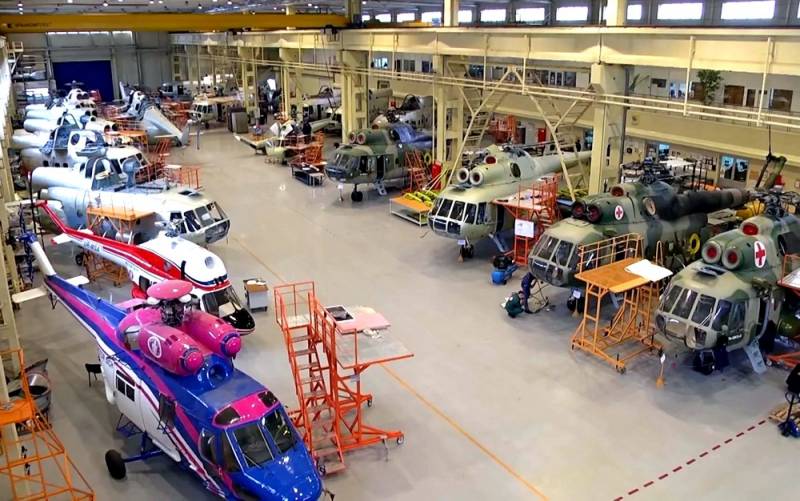 The scandalous story of the deceit committed by the Ukrainian government against the Chinese investors of the Zaporizhzhya airline has continued. Following the imposition of sanctions against buyers from the Celestial Empire, which made it impossible for them to take ownership of honestly paid property, Kiev decided to go even further - to nationalize Motor Sich, motivating this decision with “national security interests”.


Let's try to figure out how such unprecedented actions can turn out both for the plant itself and for Ukraine as a whole.

It became clear that the talks about the transfer of Motor Sich to Chinese investors represented by Beijing Skyrizon and its main owner, Comrade Wang Jing, became clear after the issue of the company's fate was brought up at a meeting of the National Security and Defense Council of Ukraine held on March 4 this year. The specific decisions taken there were not announced, however, just a couple of days later, the head of the parliamentary faction of the presidential party "Servant of the People" David Arakhamia made a statement that literally in the very near future a bill on ... the nationalization of this factory! This is, they say, "the issue of defense capability" and therefore "the legal status of the enterprise must be settled immediately." The most interesting point in this situation is not even the fact that they are trying to return to state ownership a company already actually acquired by a foreign investor, but the fact that, according to the current legislation, such a trick is impossible in principle.

Initially, it was written in such a way that it was impossible under any circumstances to take away private property from its owners, even if they became such as a result of a completely predatory "privatization". The only exception can be considered the option with the acquisition of the state in need of "rehabilitation" of commercial banks. However, the ugly story with Privat showed that if a financial institution was worth at least something at the time of nationalization, the case here, too, is likely to end in litigation. Another more or less realistic option is that the state recognizes the privatization of this or that company as illegal and cancels it. However, this is only possible in the case of enterprises with strategic status. For some reason, Motor Sich does not belong to such companies.

In such a system of coordinates, Kiev has, in fact, two options: either to recognize the aircraft plant as a strategic enterprise "retroactively" (which would be from the legal point of view the most complete savagery) and "roll back" its privatization, or simply to buy out the enterprise from the current owners at the market prices and in accordance with the relevant procedures. If they, of course, agree to this ... The former owner of Motor Sich and its president Vyacheslav Boguslaev (the one whom the Chinese partners accused of "unbridled greed") does not object to the second option. He only believes that 35% of the shares, so be it, can be given to Beijing Skyrizon (this despite the fact that representatives of this company personally bought 74% of the shares from him!), And the rest, of course, should be owned by the state. However, the question of how Beijing's colossal losses - both material and moral - will be compensated for. After all, the main, one might say, fatal mistake of Kiev is to "throw", and in a very rude and cynical form, they are trying not only (and not so much) Comrade Wang Jing and Beijing Skyrizon, but the state of the PRC.

Judge for yourself - according to the official version, for 575 million dollars, investors from the Middle Kingdom acquired 74% of the shares of Motor Sich from citizen Boguslaev. However, this is only the official, "white" part of the deal. Today, the Chinese no longer find it necessary to hide the fact that another hundred million "greens" went to Ukroboronprom both as "compensation" and as bribes into the bottomless pockets of officials of the Poroshenko administration. Plus, another $ 100 million was allocated to the enterprise, again, officially, as a loan. Combined with the costs vaguely labeled "accompanying costs" and are clearly bribes, Beijing Skyrizon spent an estimated $ XNUMX billion. However, this amount is only the "tip of the iceberg", in fact, everything is much more serious ...

The main problem is that, counting on a fair deal with Ukraine, Beijing Skyrizon took a colossal loan of $ 2 billion from the state bank of China, planning to invest this money in the construction of aircraft factories on the territory of the Celestial Empire, which were to be used Technology Motor Sich. Naturally, due to the circumstances, this project was not implemented. That is, there are not only direct losses from the money invested in the purchase of the enterprise, but also the losses of the Chinese side from unearned profits, disrupted investment plans already at home, and so on. We must pay tribute to the comrades from the Celestial Empire - they tried to resolve the issue in an amicable way with the “lost shores” of Kiev with truly Confucian stoicism and Eastern stubbornness. They offered various options for joint ownership of Motor Sich, in which a certain number of shares would go to Ukroboronprom, in fact, “for thanks”, they were ready to work with certain Ukrainian intermediaries, who also strove to “cling to” the ownership of the enterprise. ..

They endured endless bureaucratic delays and clearly far-fetched claims, based on which the transfer of the plant to new legal owners was blocked by the Antimonopoly Cabinet, the SBU, or someone else. However, at a certain stage, even the seemingly limitless Chinese patience burst. Having finally made sure that they would not see Motor Sich under any circumstances, they began to act in a "bad" way in the Celestial Empire. That is, within the framework of international legislation regulating this kind of economic disputes. Beijing applied to international arbitration with a corresponding claim, the defendant in which is not specific individuals or companies, but the state of Ukraine as a whole. The amount of the claims corresponds to this.

If at the initial stage (in the fall of 2020) it was about $ 3 billion, then later this figure increased by another $ 100 million. At the same time, the Chinese side motivated this moment by the fact that new plaintiffs entered the case, who "also suffered large losses." If we mean the state bank, which so unsuccessfully lent money to Beijing Skyrizon, then the case for the "nezalezhnoy" takes a completely nasty turn. In this case, in the arbitration process, it will be opposed by the entire might of the Chinese state, capable of "shaking off" debts from countries with much greater authority and weight than Ukraine. Most likely, it will be so - according to available information, Beijing has once again revised the size of its own claims against Kiev and intends to demand compensation already in the amount of $ 5 billion! If Motor Sich is indeed nationalized, the chances of success of such a claim will increase to about 99%. It is for this reason that the "nezalezhnoy" company today took up their favorite business - they began to "switch the arrows", accusing their partners of their own dirty deeds.

Thus, Vyacheslav Boguslaev is trying to convince everyone that "no Chinese investment in Motor Sich actually" never existed. " The funds allegedly promised to him in 2018 in two tranches of $ 100 and 150 million, totaling a quarter of a billion, were never paid. Such allegations raise more than serious doubts - the Chinese negotiators, of course, are still, their ability to conduct business tough and assertively is well known, but they have never been seen in such "kiddies". In any case, according to a completely formal agreement, which even Boguslaev does not try to challenge, Motor Sich must repay a loan of $ 2026 million, taken at 100% per annum no later than 0.3, already spent on launching new workshops for the production of helicopter blades.

Be that as it may, if Kiev nevertheless decides to complete the plan with the final and far from "relatively honest" weaning of Motor Sich from Beijing Skyrizon, then this "strengthening of defense capability" will cost it approximately the same amount as would get up, say, the purchase of a part of the Boeing Co. shares that have fallen in price over the past couple of years. Well, if someone decided to sell such to Ukraine ... Five billion on the statement of claim and numerous penalties - this is far from the whole “bouquet” of problems awaiting “non-cash” in the event of a final rupture of the deal with the Celestial Empire. The loss of export channels to China will be for her economics a blow, if not fatal, then at least a knockout one - after all, last year the lion's share of Ukrainian raw materials and agricultural products went there. Well, and as for the "foreign investments" for which so pray in Kiev, then they can simply be forgotten. According to the State Statistics Service of Ukraine, already last year their volume "collapsed" by more than 38%. At the same time, investments in industry and agriculture decreased the most - by 43% and 45%, respectively. But the Chinese comrades have invested precisely in these industries ...

However, not only the capital of the Celestial Empire is running headlong from the “nezalezhnoy”. Not so long ago, another resounding slap in the face was received by her precious "defenses". The Turkish company Baykar announced its intention to abandon the use of engines produced by Motor Sich in its military drones. There, consider it more prudent to build UAVs with "engines" from the domestic Tusas Engine Industries. But in Kiev, I remember, they already dreamed of “de-occupying Donbass according to the Karabakh scenario”, bringing down on the defenders of the Republics the armada of Turkish Bayraktar, produced either in Ukraine or in Turkey together with her. What, not destiny ?! It is very easy to understand Ankara's logic - after all, it is no secret to anyone that Kiev is forced to refuse cooperation with China, and to a great detriment to itself, not out of "national security interests", but obediently carrying out commands from the US Embassy. But Washington also has a conflict with Turkey - and it is precisely on a military-technical basis. And tomorrow, or, say, the day after tomorrow, from across the ocean, the leadership of the “nezalezhnoy” may well receive new prohibitive directives regarding it. No, it's better not to risk it ...

Thus, Motor Sich, like the rest of the Ukrainian industry, which is dying as a result of the loss of the market in Russia and most of the CIS countries, runs the risk of becoming an outcast in the markets of the rest of the world. To nationalize an aircraft building enterprise for $ 5 billion (at least), in order to subsequently ruin it and let it be scrapped - this can only be done in Ukraine!
Ctrl Enter
Noticed oshЫbku Highlight text and press. Ctrl + Enter
We are
"Barbarian robbery": Ukraine has made itself a new powerful enemy
The United States makes Ukraine an enemy not only of Russia, but also of China
Reporterin Yandex News
Read Reporterin Google News
13 comments
Information
Dear reader, to leave comments on the publication, you must sign in.