The helicopter, but not the one: the Americans deprived Kiev of the dream of assembling the Bell UH-1 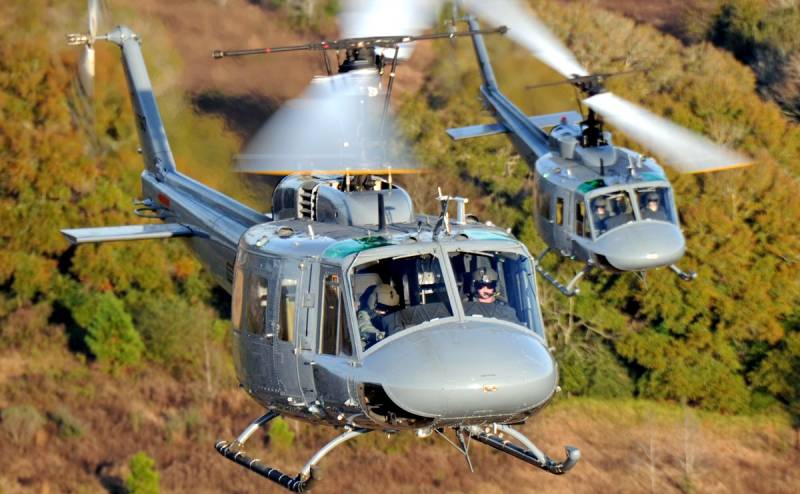 Not so long ago, many domestic media outlets covering military issues of technologies, published a message that Ukraine is planning to begin licensed assembly of American Bell UH-1 Iroquois combat helicopters. Wrote about this, in particular, and our edition.


As it turned out, which caused a certain resonance news turned out to be not just another official "duck" that fluttered out of the depths of Ukroboronprom, which regularly lies about its own achievements, but also a reason for a rather serious scandal that is now flaring up in the "nezalezhnoy". What is wrong with the "Iroquois" in Ukrainian and with military assistance from the United States to this country?

We will begin our little investigation by finding out the source of the information that turned out to be unreliable. The journalistic fraternity, of course, did not take it from the ceiling, but took it from the speech of a person who, at least because of his position, should not throw words to the wind - the head of the state concern "Ukroboronprom" Yuriy Gusev. It was he who, as recently as February 26 of this year, loudly announced that the licensed assembly of American helicopters was about to be launched at the Odessa Aviation Plant, which is part of the structure he heads. Moreover, in the process of visiting this very enterprise, Gusev with the most serious air continued to repeat the same thing, fervently assuring the workers there that it was already “on the ointment”, “work at the final stage,” and if so, then the first “Iroquois” should leave the assembly shop no later than August of this year, in order to proudly soar into the sky on the Ukrainian independence day. I must say that people who think in all this hype were somewhat alarmed by two details.

First of all, why on earth is the Odessa Aviation Company going to deal with rotary-wing aircraft, which has never produced them, and not Motor Sich, which specializes in just this area? Secondly, if the helicopters are actually produced under the license of Bell Textron, then the beginning of this process would certainly have to be preceded by the signing of a corresponding agreement with the US authorities. Well, there is very harsh legislation in this country in everything related to the transfer of certain military technologies to "third countries". And if something like this would have happened, then all the ukrapatriotic irons would have yelled about such a “peremog”, who do not forget to mention every pair of boots or even underpants handed over to the Ukrainian Armed Forces by their “western partners”. However, no one said a word about anything like that. "Well, can it - for reasons of strict secrecy?" - “patriots” -optimists hastened to calm themselves down. And once again they made a mistake in the most cruel way ...

The cynical Poles spoiled the whole thing, and in the most ruthless way. But they are also almost “best friends” of Kiev! Journalists from the Polish edition of Zbiam took, and even turned to Bell Textron with an official request as to what kind of helicopters they had decided to assemble there in Ukraine. In response, the Americans did not just “make big eyes”, but, figuratively speaking, opened their mouths in surprise: “What kind of“ Iroquois ”are? What kind of Ukraine is this ?! Yes, we do not know anything about it and we do not know! " Representatives of the company absolutely clearly and unambiguously stated: they did not issue any legal licenses for the production, assembly, and even painting and lubrication of Bell UH-1 helicopters, as well as any other aviation equipment, as well as its components and components, either to the Odessa Aviation Plant or to any - any other enterprise, state or commercial structure in Ukraine. Dot! At the same time, the Americans noted that, perhaps, they would not mind to cooperate with the "nezalezhnoy", but only in the field of "modernization of the helicopters it has."

However, even for this, the issue must be resolved "at the very top" - in the United States government. No other way. After Zbiam made public all these revelations, brutally and insensitively shattering another "Ukrainian dream", things took a very unpleasant turn. The head of a state concern, who is, in theory, responsible for the country's defense capability, caught like a boy in an outright lie - this is somehow not funny. However, it was not Gusev who had to "take the rap", who immediately "ducked into the bushes," but the director of the Odessa aircraft plant, Vitaly Yukhachev. However, his explanations of clarity in this story did not add at all, rather the opposite. According to the director, it turns out that his enterprise will make a “national Ukrainian product”. Something like a helicopter, like an American ...

Washington does not mind for Ukraine ... military trash

By the way, I am not exaggerating at all, and I am not making jokes. Vitaly Yukhachev said that back in 2017, the Odessa aircraft plant allegedly concluded a kind of "memorandum with the American side", followed by a "general agreement". At the same time, despite the fact that the director continues to repeat about the "SKD assembly of machines of the" Iroquois "type, he admits that in no way Bell Textron acts as a counterparty to his enterprise, but some" non-state company from the United States "that is going to implement this project “funded by private investors”. In general, Yukhachev is openly “confused in the testimony”. He is talking about an analogue or a copy of the American "Iroquois", which is a multi-purpose combat helicopter used by the US Army in many conflicts as a strike and transport. And then suddenly the director starts talking about the creation by his enterprise of a "national aviation product - a transport and passenger helicopter of the middle class", which, moreover, "is planned to be assembled from Ukrainian components over time." Oh, mummies!

After that, the extreme concern of the Bell Textron managers, who were dumbfounded by the Polish journalists with such a "surprise", becomes more than understandable. But you never know what these Ukrainians will collect there - maybe even a flying pressure cooker! And then it will crash down in disgrace, and even kill a lot of people at the same time (and with the products of the military-industrial complex "nezalezhnoy" this happens all the time - remember at least the same mortar "Hammer") ... But they will say that this is ours " the turntable "was crushed! Well, no - let them play whatever they want there, only without references to decent companies, who have nothing to do with the tramps from the aircraft industry. You can, of course, understand the head of "Ukroboronprom" Gusev - after all, everything turned out so beautifully! Obviously, the example of "effective military assistance" of the overseas "allies" he composed was supposed to instill confidence in the hearts of the "patriots" and scare the "vorogiv" to death. It just happened the other way around.

The United States' military aid to Ukraine is a song. Not so long ago, Pentagon spokesman John Kirby said that this year it will be $ 125 million. Tellingly, almost all this money, up to the last cent, will not go anywhere from the United States. They will simply be credited to the delivery of two Mark VI patrol boats, of which the United States has to transfer eight units to its “allies” for the period from 2021 to 2024 (a total of 16 boats are planned for transfer). By the way, as Kirby made a separate reservation, the Javelin missile systems, around which a whole hysteria was raised in Ukraine at one time, will not be on the “menu” this time. Enough, played enough ... "But after all, patrol boats are better than nothing?" - someone will say. Well, how to say - "better" ...

This could be considered if it were not for one very significant detail: during a speech at the virtual symposium of the Surface Navy Association 2021 in January 2021, Major General of the United States Marine Corps Tracy King, who is also the head of Expeditionary War in the Office of the Chief of Naval Operations (CNO), said the Mark VI boats should be completely decommissioned by the end of the current, 2021 fiscal year. And this is despite the fact that they were put into operation relatively recently - in 2014-2018. In the American army and navy, “old men” of a much more respectable age are “dragging on service”. Of greatest interest to us is the explanation of the motives for such a decision, announced by King with the utmost frankness. According to a high-ranking naval lady, these boats were considered simply "useless" in the course of the Pentagon's elaboration of "scenarios for conducting military operations against countries such as Russia and China." The reason is its small size and extremely limited firepower. Plus, according to King, these ships are "incredibly expensive to maintain."

This is just wonderful! Before us is a frank admission that the United States, within the framework of "providing military assistance to Ukraine to resist Russian aggression", is transferring to it not just some rusty rubbish to be written off, but military equipment that is obviously unsuitable for waging a war with that one " the most probable enemy ", which Kiev sees in the face of our country! The greedy Americans themselves do not want to spend money on the maintenance of these troughs, so they prefer to dispose of them by sending them to the "non-cash". Oh, it is not for nothing that Ukrainian folklore has a saying: “On Tobi, Nebozhe, that which is useless for me”! This is exactly what Washington is doing, but at every step they reproach Kiev for their "charity" and demand that they follow the instructions coming from overseas in everything.

Agree, there is a huge difference between the definitions "outdated" and "unusable against the enemy". To supply their “allies” with galoshes, which any warship of the Russian Navy will sink and not notice, is an indicator of the true attitude of the United States towards Ukraine. By the way, if in Odessa they really start to cook "something like" Iroquois ", the situation will be exactly the same. By itself, this machine is, to put it mildly, hopelessly outdated morally. And assembled at an enterprise that does not have specialized specialization and experience in the production of helicopters, as such, by the hands of Ukrainian "craftsmen" and, God forbid, "from local components" ... What this will be in the end - even scary to think.
Ctrl Enter
Noticed oshЫbku Highlight text and press. Ctrl + Enter
We are
"We must beat first": the geopolitical alignment around Russia is continuously deteriorating
Ten "defeats" of Putin
Reporterin Yandex News
Read Reporterin Google News
6 comments
Information
Dear reader, to leave comments on the publication, you must sign in.