The rate on the Airborne Forces: why does the Ministry of Defense of the Russian Federation need a hundred new Il-76MD-90A 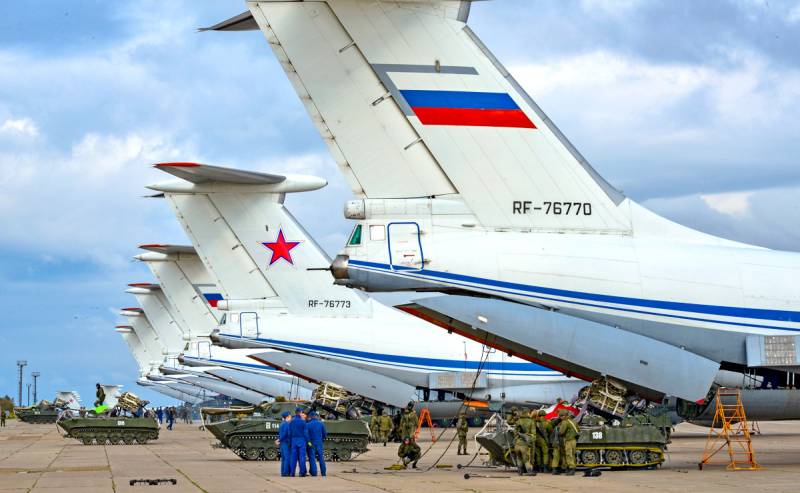 Despite Washington's promises to stop "exporting democracy" around the world with military force, this is hard to believe. One of the main tools of external policy The Democratic Party, which recently came to power in the United States, is the violent overthrow of unwanted regimes and the organization of armed conflicts on the border of potential opponents of the "hegemon", which now officially include not only Russia, but also China. In such a situation, it is necessary to be able to urgently "extinguish the fire" by quickly transferring troops and combat to a problem point on the map. machinery... Apparently, the RF Ministry of Defense seeks to maximize the capabilities of its Military Transport Aviation and relies on the Airborne Forces.


First, it is worth saying a few words about the American paratroopers and the BTA aircraft used by the Pentagon. Unlike ours, the US Airborne Forces are not a separate branch of the military, but are considered one of the most efficient. It is inherently a small army with a maximum operational rate of deployment. Having received the order, the airborne assault battalion of the US Armed Forces should be redeployed and deployed in the theater of operations (theater of operations) within 18 hours. After the landing, the first priority is to take control of the surrounding area and ensure the arrival of additional forces. Everything you need can be dropped by parachute, including the Mk 19 automatic heavy grenade launchers, the Tou ATGM and the Bradley M2 BMP. Heavier weapons, such as the towed 155 mm M777 howitzer, can be easily transferred by helicopter. MLRS M142 HIMARS, which are also at the disposal of the American paratroopers, are transported by heavy transport aircraft C-130 Hercules.

It turns out that for the effective operation of the Airborne Forces, it is critically important to have a sufficient number of cargo aircraft of the Military Transport Aviation (MTA). These include the already mentioned C-130 Hercules turboprop, which is the most common military transport in the world, and the Boeing C-17 Globemaster III turbojet. The latter were created for the air transportation of troops and military equipment, for the dropping of cargo. Globemaster III is in service with the United States, NATO and many other countries where it was exported. However, in 2015, Boeing decided to discontinue their production.

In our country, things are a little different. The Russian Airborne Forces are an independent branch of the armed forces designed to solve a very wide range of tasks. Among them: landing behind enemy lines and disrupting the controllability of his troops, rear and communications, disrupting his plans to advance and deploying reserves, destroying ground-based elements of high-precision weapons, countering the landing and destruction of enemy troops, covering open flanks and directions, holding back the enemy that has broken through, etc. .d. At its core, the Airborne Forces are a true military elite that can be effectively used as a rapid reaction force. The Airborne Forces can be delivered to the theater of operations both by parachute and landing.

Russian military aviation is represented by light An-26, medium An-12, heavy Il-76 and super-heavy An-124 Ruslan. We have only 16 of the latter, so the main "workhorse" in the heavy weight category is the old Soviet Il-76. For its time, it was a wonderful and unpretentious aircraft that could deliver up to four units of armored vehicles by parachute or landing, but now it is quite inferior to its younger competitors. Also, a big problem was that their production remained in independent Uzbekistan. In 2010, it was moved from Tashkent to Ulyanovsk to the Aviastar-SP plant. Over the past years, many modifications of the Il-76 have been made: a flying laboratory, a firefighting aircraft, a weightlessness simulator for training cosmonauts, a hospital aircraft, a jammer, a strategic air command post, a tanker aircraft, an AWACS aircraft, an aircraft adapted for operation in the Arctic. and Antarctica, etc.

Of greatest interest in the context of military transport are the Il-76MD-M and Il-76MD-90A versions. The plans of the Ministry of Defense were to bring a hundred old Il-76s to the level of the IL-76MD-M, extending their operation for at least another 15 years. Thanks to the changes introduced, the operational characteristics of this aircraft have been significantly improved. A new optoelectronic sighting system has been installed, the transporter is equipped with all active and passive protection systems, heat traps. The old "workhorse" will still "plow". But the Russian military is undoubtedly pinning its main hopes on the Il-76MD-90A.

This is not just a product of a deep modernization of the Il-76, they are now being built from scratch. Externally, the transport aircraft is similar to its predecessor, but in its production modern materials, avionics, more powerful engines that meet the latest environmental standards were used. Initially, it has a large resource that allows it to serve for 30 years, and it can be further extended with modernization. The updated aircraft retained the advantages of the prototype, which made it possible to operate on unpaved runways, fly in the highlands and the widest temperature range, from the arctic cold to the hot tropics. A heavy transport aircraft can lift up to 60 tons, including 125 paratroopers or 225 personnel, as well as the entire list of military equipment used by the Airborne Forces, namely: BMD, armored personnel carrier, self-propelled guns, etc. In addition, the Il-76MD-90A is suitable for use as a hospital aircraft and firefighting aircraft.

The Russian Defense Ministry plans to acquire up to a hundred Il-2030MD-76A by 90, as well as upgrade the same number of "veterans" to the level of Il-76MD-M. With them, the capabilities of the Airborne Forces and VTA will significantly increase, and the Russian troops will become more airmobile.
Ctrl Enter
Noticed oshЫbku Highlight text and press. Ctrl + Enter
Reporterin Yandex News
Reporterin Yandex Zen
14 comments
Information
Dear reader, to leave comments on the publication, you must sign in.