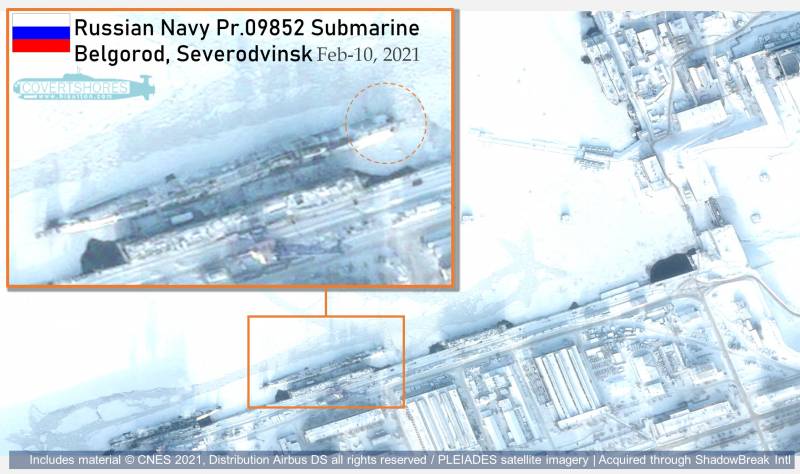 American satellites were able to examine the carrier of nuclear torpedoes "Poseidon" from space, and on the basis of the images of the submarine, US experts made conclusions about its military technical characteristics.


The Poseidon was carried by the unique project 09852 K-329 Belgorod special-purpose submarine. It is one of the least studied Russian submarines currently under construction by Western military analysts.

The boat will be armed with the strategic strike system "Poseidon", and will also carry out secret military operations at great depths. In this role, she will work under the supervision of the Main Directorate of Deep Sea Research of Russia.

Belgorod will be able to carry up to 9 Poseidons on board. Based on the images, experts believe that the diameter of the boat's torpedo tubes is about 6-7 feet (about 2 meters), from which one can draw hypothetical conclusions about the caliber of the latest super-torpedoes.

The submarine was launched in April 2019 and is expected to begin sea trials in May 2021 after the White Sea is ice-free. According to TASSobtained from a source in the military-industrial complex, the tests of "Belgorod" have nothing to do with test launches of "Poseidons".

Initially, the submarine was planned to be transferred to the Russian fleet in 2020, but this was not done in part due to the Covid-19 pandemic.
Ctrl Enter
Noticed oshЫbku Highlight text and press. Ctrl + Enter
We are
Space shield of the Motherland: the West is not in vain afraid of Russian inspector satellites
New weapons on the way: What is known about the anti-satellite complex "Burevestnik"
Reporterin Yandex News
Read Reporterin Google News
6 comments
Information
Dear reader, to leave comments on the publication, you must sign in.