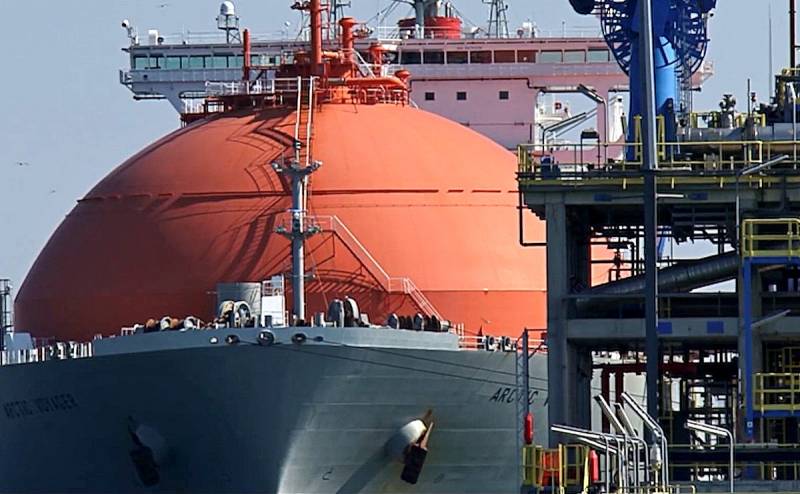 In his previous article I promised to tell you how the famous epic with the construction of the SP-2 ended and why Biden, who replaced Trump, is burying the American gas business. I keep my promise. So, Biden's reasons - why is he burying American LNG.

Reason number 1. It is impossible to oust a cheaper product from the market with a more expensive product.

Please note that there is no SP-2 yet, and American LNG is in no hurry to get to Europe. I was not in a hurry yesterday under Trump, and I am not in a hurry today under Biden, but why? Even if we ignore the higher price offer in Southeast Asia (we will assume that it does not exist), what prevents the Americans from squeezing the EU gas market from Gazprom? The answer is simple to the point of banality - it is not possible to oust cheap Russian pipe gas from the European market with more expensive American gas with a relative equality of their consumer qualities! Even sanctions. European regasification LNG terminals have been underutilized for years, some have even been mothballed (in Spain, for example). Who is to blame for this - Gazprom or the invisible hand of the market? At the same time, do not forget that the Europeans' gas needs are only growing (this is both an increase in consumption and a decrease in domestic production).

Conclusion: The Americans can still get into the EU market, but they will not be able to squeeze Gazprom. And Biden got it.

Reason number 2. American LNG loses not only to pipeline gas from Russia, but also to LNG from Russia

Production costs at Yamal LNG are only $ 0,1 per million British thermal units, while American producers are forced to buy gas from their own gas hub Henry Hub for about $ 2,6. That is why it is even more profitable for the Americans not to drive their own gas carrier across the Atlantic to the EU, but to outbid the Russian production of Yamal LNG - and "here you go, if you please have a bite." As they say, nothing personal is business!

Chartering a fleet is very expensive. A fresh example of this, when a terrible cataclysm happened in China, South Korea and Japan in January-February of this year with the Siberian 18-degree frosts that descended on them, fettering all their green energy, gas prices soared 7 times, updating the 6-year highs. Together with them, the prices for LNG transportation soared - carriers lifted them by 700%. And the Americans do not have their own LNG transport fleet. And even if they want to build it, they will find that there are no free shipyards in the world for such volumes. Three shipbuilding giants in South Korea - Daewoo, Hyundai and Samsung (the Koreans dominate this market) have reserved a significant part of their production capacity for 7 years ahead until 2027 to fulfill the order of Qatar Petroleum (the agreement provides for the construction of more than 100 LNG tankers, for a total amount of more than $ 20 billion).

As a result, Biden, after scratching his turnips and realizing that it would be impossible to reduce Gazprom's share in the European gas market, especially considering his long-term contracts for the supply of “blue fuel” signed with many EU countries until 2030-40, and realizing the doom of cavalry attacks with a bare saber against Russian gas tanks (in the literal and figurative sense of the word, given that there are not only gas tanks), and, not forgetting about the cost of American LNG and Russian pipe gas, backed down with the construction of SP-2. And he did it so cleverly that even I took off my hat in front of his ingenuity. As a result, he retained the location of Germany and did not seem to lose his face.

Here the majority, following the events on TV, will exclaim: “Op-packs! How so? Why don't we know anything about it ?! " Because the Americans do not like to trumpet their defeats. Moreover, it cannot be called a defeat. The states have achieved their goal - Europe is defeated and humbly ready to carry out the commands of the white master. Namely, the Americans fought with her, or rather not with her, but for the influence on her. They do not care about the Russian Federation, no matter how offensive it will be to all Russian patriots, Gazprom just fell under the arm, it is not so different according to the principle: "Don't stand under the arrow!" and "Who did not hide - I am not to blame." The war was fought over influence on the EU. And the Americans won this war. How they did it, more on that below.

For those who have forgotten the chronology of events, I will remind you that on January 1 of this year, the US Senate, overcoming the veto of the then President Trump, adopted the defense budget for 2021 with amendments limiting the completion of construction, certification and commissioning of the Nord Stream 2 gas pipeline. (The Turkish Stream also appeared there, but they were late with it, it has already been completed and is functioning), having carried out these amendments by the law of the US Congress "On the Pentagon's budget for 2021." It seemed that this was the complete finish of the SP-2 project.

Even if Biden really wanted to meet Frau Merkel halfway, he would not be able to cancel this document. Because the laws of the Congress are not regulated by decrees of the President, another law is needed to cancel the one already adopted. And in the US Congress there is complete consensus on this issue - both "donkeys" and "elephants" were in favor of sanctions with both parts of the body. Seemingly insoluble problem? End of Nord Stream 2. But Biden deftly twisted himself, masterfully walking between Scylla and Charybdis. How did he do it?

Recently, a representative of the US State Department submitted to Congress a list of organizations against which the State Department plans to impose sanctions on Nord Stream 2. To their surprise, the congressmen did not find a single German company there, and of the Russian ones, only the pipe-laying ship Fortuna and its owner, KBT-Rus, turned out to be there.

And it's all? Senate Republican leader Mitch McConnell couldn't contain his indignation:

Simply put, the current sanctions are completely inadequate. The intentions of Congress are clear and cannot be ignored: ... stop the completion of the malicious construction of the Russian Nord Stream 2 gas pipeline. The application of sanctions only against the Russian pipe-laying vessel Fortuna and its owner KVT-RUS, on which the previous administration had already imposed sanctions, does not correspond to this intention. Completion of the construction of this pipeline would be nothing more than a victory for Vladimir Putin
- he said.

For those who have forgotten, I will remind you that this is the same senator who, a couple of years ago, when the Russian agent Trump was president and the Democrats were in opposition, was nicknamed Moscow Mitch for his suspicious love for the Russian Federation. From which one can draw the obvious but paradoxical conclusion that Russophobia in American politics is not purposeful policies White House, but serves only as an instrument of internal political struggle. For a long time, the United States has not seen Russia as an enemy that threatens American domination, with which it is necessary to purposefully fight as a top priority. Under Trump, the Kremlin's agents were Republicans. Under Biden, the Democrats took their place. As they say, nothing personal - the law of conservation of energy. The water cycle in nature.

But in this situation we are more interested in what will knock Sleepy Joe out of Frau Merkel in exchange for this? Agree, not a standard move - the permission of a specific route bypassing Ukraine in exchange for its forced life-long maintenance by Russia and the right to Uncle Sam to keep Germany in one place. Very nice divorce! Especially considering the fact that with the growth of gas consumption in the near future, Europe still cannot do without the Ukrainian pipe. And by that time, the Americans, I think, will take the Ukrainian pipe under full control not only de facto, but also de jure, joining the consortium of future shareholders. Well, wait and see.
Ctrl Enter
Noticed oshЫbku Highlight text and press. Ctrl + Enter
We are
"The Omnipotent Power of American LNG": Myths and Legends of the Gas Market
Peace enforcement operation. Russia inflicts a preemptive strike on Kiev
Reporterin Yandex News
Read Reporterin Google News
4 comments
Information
Dear reader, to leave comments on the publication, you must sign in.