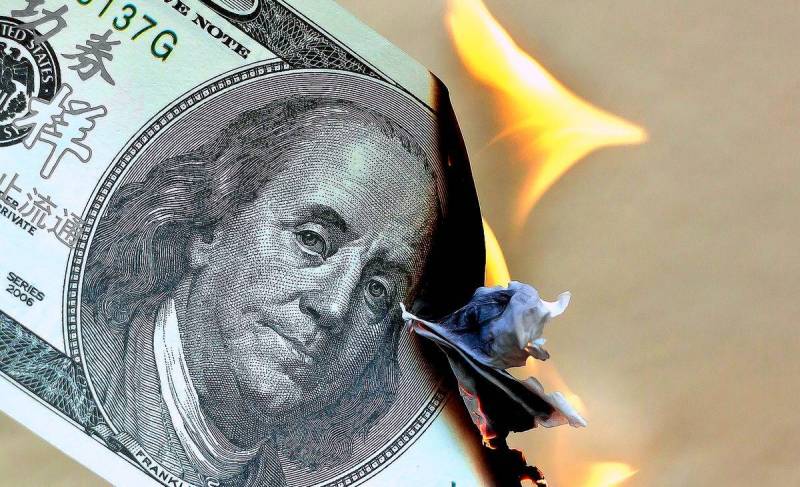 In the past "coronavirus" year, quite alarming bells sounded in relation to the US dollar. The share of the dollar in international transfers, according to SWIFT data, decreased to 37,64% against 37,82% for the euro. That is, the American currency at the end of 2020 lost its position to the European one. The share of the Chinese yuan fell to a “miserable” 1,66%, but at the same time, a number of experts are making a long-term bet on it. What could all this be connected with?


It should be noted that the dollar is still the main funding currency. It, according to the Bank for International Settlements, accounts for almost half of all world trade and 61% of all foreign exchange reserves. However, there are also negative tendencies that are gradually shaking his seemingly unshakable positions.

First of all, it is the continuous growth of the US government debt. Its size is truly colossal; today it has already exceeded $ 28 trillion. The sharp increase in the national debt was due to several factors at once. Firstly, already ex-President Donald Trump tried to "fire up" the American the economy and has achieved significant success in this. Under him, GDP growth in the United States was 3%. They had to pay for this, among other things, by increasing the national debt. Secondly, the further increase in borrowing was caused by the coronavirus pandemic, which in 2020 crossed out all the previous achievements of the Republican. The need to allocate colossal funds to support the population and business led to the deficit of the US federal budget to GDP, which amounted to 14,9%. These are the worst figures since the Second World War.

As of February 2021, this figure was already 16,2%, and now this figure will be even higher, as newly elected President Joe Biden intends to inject an additional $ 1,9 trillion into the economy as an emergency measure to restore it. The natural consequence of such a financial policy inflation will rise. The index of inflationary expectations of growth in prices for goods and services for the next year is 3,3%, and for a five-year period - 2,7%. Analysts point out that an almost twofold increase in the yield of US Treasury bonds, which is now 1,3% per annum, can serve as a harbinger of an increase in inflation. A direct consequence of this was that professional investors began to withdraw from risky assets and shift them into US government bonds.

The American national debt is in many ways a unique system. Its total volume is about $ 23 trillion. At the same time, international investors account for a package of long-term securities, estimated at 11,6 trillion, and short-term securities in the amount of $ 1,2 trillion. Everything else is securities that circulate within the United States itself. That is, almost half of their colossal national debt is domestic borrowing. Even without outside investors, the United States will be able to hold out by self-subsidizing, printing new dollars and returning them to the financial system through debt obligations. If something happens, the American economy will be able to avoid a complete collapse.

However, the role of foreign investment, which accounts for more than half of the US national debt, still cannot be underestimated. A very negative trend for Washington is being observed here. On the one hand, many other states stopped building up their portfolios in American bonds, and some, like Russia or China, began to significantly reduce it. This is largely due to the policy of ex-President Donald Trump, who, for the sake of America, was ready to impose sanctions even against traditional allies. On the other hand, a stable “anti-dollar opposition” has emerged in recent years.

For example, the European Union is deeply thinking that it is no longer possible to rely on the United States as a reliable partner that always stands on their side. Brussels and Berlin are trying to pursue more and more independent policies. In particular, Germany is fundamentally not inferior to the United States on the Nord Stream 2 issue, avoiding surrender under external pressure and insisting on a mutually beneficial compromise. Political subjectivity requires real economic sovereignty, so an objective increase in competition between Americans and Europeans is inevitable, which is reflected in the dynamics of the use of their currencies in international settlements.

It is also worth mentioning the growing role of China. So far, the share of the yuan in transfers is some 1,66%, seriously inferior to the euro, dollar, pound, Japanese yen and Canadian dollar, but this is only “for now”. Recall that in 2010, the Chinese currency was in 35th place in the world in terms of popularity in international settlements, and in 2014 it became the 6th. The yuan is officially included in the IMF's list of reserve world currencies. Taking into account the real role of the PRC in the international economy as the main exporter and the second importer in terms of volume, one should expect further growth in the popularity of its national currency. China was the first to cope with the consequences of the coronavirus pandemic and is successfully competing with the United States itself.

In the future, many analysts expect professional investors to "turn to the East" and increase the role of the yuan as an alternative to the dollar as the world currency. Together, the "European" and the "Chinese" can, if not completely overthrow the "American" from his pedestal, then actually move him on it, forcing him to make a lot of room.
Reporterin Yandex News
Reporterin Yandex Zen
10 comments
Information
Dear reader, to leave comments on the publication, you must sign in.