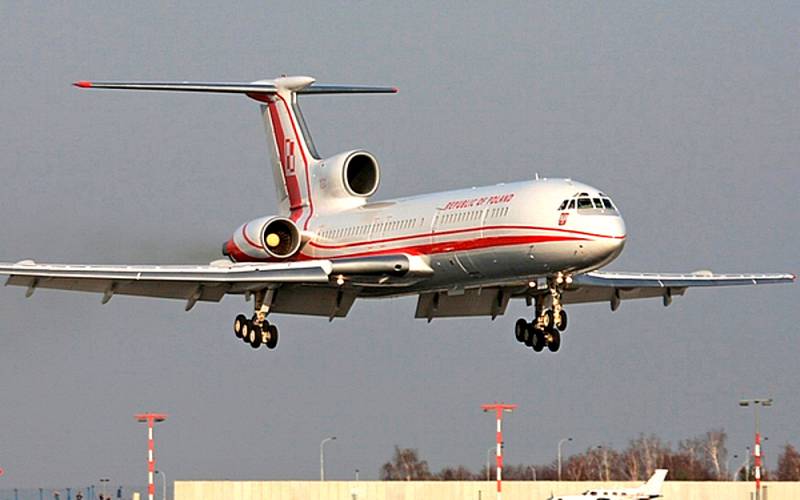 Rewriting history to please political the conjuncture is a very dangerous trend with far-reaching consequences. They like to do this in the West, exposing our country in a negative light. So, the USSR is stubbornly trying to equate with the Third Reich, appointing guilty of inciting World War II. But in Eastern Europe they went even further. The Polish authorities are trying to revise the history of eleven years ago, when the top leadership of their country died in a plane crash near Smolensk. What is Warsaw really trying to achieve?


The tragedy took place on April 10, 2010. The Polish presidential plane, flying PLF101, hit trees and crashed in heavy fog while landing. All 96 people on board were killed. This was a real disaster for the Republic of Poland. Among the dead were President Lech Kaczynski and his wife Maria, the head of the presidential chancellery Vladislav Stasiak, Deputy Foreign Minister Andrzej Kremer, Deputy Minister of Culture Tomasz Merta and the head of the National Bank Slawomir Skrzipek, as well as two Vice Speakers of the Seim and several parliamentarians, Vice Speaker of the Senate two senators. In addition to the country's political leadership, almost the entire military elite died in the plane crash: Air Force Commander Andrzej Blasik, Navy Commander Andrzej Karveta, Land Force Commander Tadeusz Buk, Chief of the General Staff of the Polish Army Frantisek Gongor, Commander of the Special Forces Wlodzimierz Potasiński, Deputy Minister of National Defense Stanislav national security of Poland Alexander Shchiglo and many others. Also on board were many famous religious and public figures.

The simultaneous death of the Polish elite of color came as a real shock to the Republic, brought about major political changes in the country and gave rise to various conspiracy theories. Some forces in Warsaw are still speculating on this human tragedy, trying to squeeze the maximum dividends out of it. They reject the results of the investigation of the international air commission and put forward new, frankly delusional ones instead. What actually happened near Smolensk 11 years ago?

It was officially established that the cause of the tragedy was a combination of several factors at once, the main of which was human. The aircraft crew was not sufficiently prepared to work in extreme weather conditions, it was formed just a day before the flight in violation of all possible instructions and regulations. On that ill-fated day, only the flight engineer had a valid permit to fly the Tu-154. Regular trainings to coordinate the actions of the crew were not carried out on the simulators. At the same time, apparently, the presence on board of the country's top political and military leadership had an extremely negative impact. In addition to the crew members, at the time of the crash, there were two outsiders in the cockpit: the head of the Polish Air Force Andrzej Blasik and the representative of the Ministry of Foreign Affairs Mariusz Kazana. At the same time, Blasik was not completely sober, 0,6 ppm of alcohol was subsequently found in his blood.

Because of the heavy fog, Russian air traffic controllers offered the Polish plane to land in Minsk or Vitebsk instead of Smolensk. However, the country's leadership in such a large composition flew on a private visit to mourning events on the occasion of the 70-1 anniversary of the Katyn massacre. It is obvious that serious psychological pressure was exerted on the pilots, and they, without proper training, were forced to land the liner in extreme weather conditions. It is known that during the 2008 war between Russia and Georgia, President Kaczynski ordered to fly to Tbilisi, but then the crew did not obey due to possible risks. In 2010, the commander of the aircraft (PIC), behind whom was the drunk head of the Polish Air Force, could not refuse. From the records of the "black box" it follows that all decisions were made not by the FAC, but by the president of the country. Captain Arkadiusz Protasyuk was forced to consult with the second outsider in the cockpit, the head of diplomatic protocol Mariusz Kazana:

Director, the fog has appeared. At the moment, in these conditions that we have now, we will not be able to sit down. Let's try to come up, we will make one run, but most likely, nothing will come of it. So ask, please (at the chef) what we will do.
And then what happened happened. The crew lost control in difficult meteorological conditions, the plane touched the trees with its wing, fell and crashed. It was a great tragedy, but it was nobody's fault, except for insufficient training of pilots and the strong psychological pressure exerted on them by the country's top political and military leadership. To admit this is unpleasant, because in Poland various conspiracy theories began to multiply, which tried to give the tragedy at least some meaning.

The most idiotic one is actively promoted by the former head of the Polish Ministry of Defense Anthony Macerevich - this is the so-called "Russian trace". In all seriousness, it is argued that the cause of the plane crash was the explosion of a charge placed in the wing of the aircraft during the repair of the Tu-154 in our country:

In this case, a laboratory in Oregon (USA) detected the presence of TNT. It was a part that no one untwisted, except for the repairmen, and traces of TNT were found inside it.
In Warsaw, the results of the first investigation have already been swept aside, a "new" one is being actively promoted regarding the fact that the presidential airliner exploded in the air. Delirium, I must say, is rare. Recall that the entire Polish elite flew to Smolensk on the anniversary of the Katyn massacre. Our countries have a very complicated history of relations. Shortly before the tragedy, President Medvedev made an extremely controversial decision to "repent" to Warsaw for Katyn, saying:

Stalin's guilt in the execution of Polish officers at Katyn is beyond doubt.
Despite the controversial and controversial nature of this historical issue, this was a clear step towards the reconciliation of modern Russia with Poland. And that, after we "repented", it was necessary to lure the entire Polish elite into their own territory near Smolensk and detonate a bomb planted in the wing? What nonsense? There would be no practical benefit from such a terrorist attack, on the contrary, after 2010, Moscow and Warsaw began to diverge even further. If anyone wants to look for beneficiaries from the hypothetical "liquidation" of the entire Polish leadership, then it should be done in Poland itself. But the problem is that the fact of an explosion or several explosions is not confirmed by anything.

Despite this, Warsaw is now insisting on the "theory of two explosions", referring to the conclusions of some American and British experts. What for? It can be assumed that this is a new stage in the sanctions war of the West against Russia. Only one more examination can confirm, or rather, deny the presence of TNT on the wreckage of the aircraft. However, the wreckage is stored in our country as material evidence in a criminal case. Now Poland can express no confidence in the results of the investigation and demand the conduct of a new examination abroad.

This puts Moscow in a difficult situation. If she refuses to hand over the wreckage to the Poles, they may accuse her of concealing the "terrible truth." If it does, we will not be surprised if "independent experts" immediately find traces of not only TNT with RDX, but even "Novichok". The experience with the transfer of Alexei Navalny's insensitive body to the West will not allow lying. Both options may serve as a pretext for the introduction of new anti-Russian sanctions. As a matter of fact, for the sake of that, everything is clearly started.

The precedent is dangerous. What's next? If the Rosophobes succeed in dancing on the bones of the deceased Polish elite, then further they can begin to raise other cases, turning them in their favor. Here they will remember Georgia in 2008 and both wars in Chechnya. You look, in the end, the bill will be charged for the restoration of the Reichstag.
Ctrl Enter
Noticed oshЫbku Highlight text and press. Ctrl + Enter
Reporterin Yandex News
Reporterin Yandex Zen
21 comment
Information
Dear reader, to leave comments on the publication, you must sign in.