By slandering about the theft of drawings, Ukraine is trying to draw attention to the unsuccessful "Oplot" 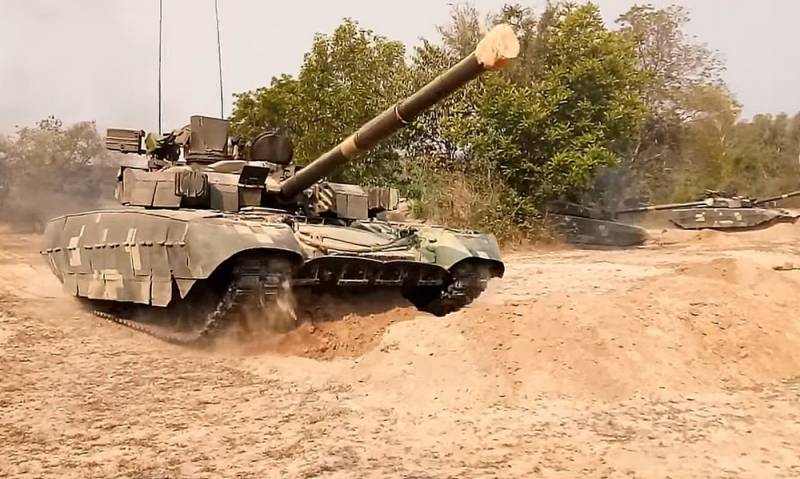 The Ukrainian tank T-84BM "Oplot" has been in the spotlight in recent days. A tank seen last year at an American military training ground in the state of Arizona, which formally passed through export documents as the T-80UD, has now been transferred to another training ground. It also became known earlier that the United States purchased new power plants and weapons for this combat vehicle in Kharkov. And now the SBU reported that a certain "Russian spy" had been detained in Ukraine, who allegedly wanted to acquire secret drawings of "Oplot". What could be behind this whole story?


First, you need to say a few words about the tank itself, as it deserves it. Oplot is indeed a very serious combat vehicle, since it was developed on the basis of our Soviet T-80UD. The T-84BM differs from the previous Kharkov-made tanks in a new fire control system, which provides all-weather round-the-clock aiming and shooting, as well as an improved system of dynamic and electro-optical active protection against high-precision weapons with a laser control system. According to the developers, "Oplot" is reliably protected from shots from anti-tank grenade launchers and recoilless guns, anti-tank missiles, cumulative and armor-piercing sub-caliber shells. The tank ensures the survival of its crew when a mine explodes under a track with a TNT equivalent of 10 kilograms. It is equipped with a chemical and radiation reconnaissance device, a system of protection against weapons of mass destruction.

The 6TD-2E six-cylinder diesel engine provided a 20% increase in power density, and the transmission was simplified. The power plant is adapted for efficient operation in conditions of high humidity and extreme weather temperatures up to plus 55 degrees Celsius. At the same time, the engine is multi-fuel and can simultaneously run on diesel fuel, gasoline, kerosene or their mixture. The tank also has an auxiliary power unit that supplies power to its system when the engine is off. The updated transmission simplifies the control of the "Oplot", making it smoother, more maneuverable, and also significantly reducing driver fatigue.
The main armament of the Ukrainian tank is a 125-mm smoothbore cannon, which can fire armor-piercing subcaliber, cumulative, high-explosive fragmentation shells and anti-tank guided missiles. The barrel can be easily removed and replaced in the field. Also on the combat vehicle there are two machine guns.

In other words, Oplot is objectively a very decent tank in terms of its tactical characteristics. There is nothing particularly surprising here, given our common Soviet engineering school. According to the American military expert Charlie Gao, the T-84BM can compete on an equal footing with the Russian T-90, yielding to the more modern T-14 Armata. It is interesting that the specific power indicators of the Ukrainian "Oplot" engine exceed those of the American "Abrams" and the German "Leopard-2". Also on an equal footing with samples of Western armored vehicles is the work of its automatic transmission, while the T-84BM can overcome water obstacles of much greater depth than the Abrams. It is not surprising that the Pentagon at one time took care of bringing in several Oplots for testing at its proving grounds using forged export documents. Note that the duties of the military of all countries include the study of the capabilities of combat equipment potential opponents. But the United States is not going to fight with Ukraine, right?

And here it is necessary to descend from heaven to earth. With all those indisputable merits of the T-84BM that were listed, the "Oplot" could not really take place. Even during the times of normal cooperation between Ukraine and Russia, too long production cycle was considered its main problem. The main foreign customer of the Ukrainian tank, Thailand, flattered by its tactical and technical characteristics, as a result, refused further purchases, limiting itself to a small batch. After the severing of industrial ties with our country, Kiev turned out to be completely incapable of import substitution of critical components for its tank. This has been de facto officially recognized at the highest level.

Then the question arises, what was the whole story of the alleged attempt by "Russian spies" to acquire the drawings of "Oplot"? There is nothing secret in it for the RF Ministry of Defense; it is a product of the general engineering and design school and industrial cooperation. In addition, Russia has its own line of armored vehicles of all classes, which is in no way inferior, and in some places significantly surpasses the Ukrainian one. What is this nonsense?

The only sensible explanation that comes to mind is Kiev's attempt to attract increased attention to Oplot from new customers. The tank is really good, but Ukraine alone cannot produce it on its own. Either the country's authorities want to lure a foreign partner into this interesting, but withered project, or even sell him a license and the right to manufacture the T-84BM. Note that Turkey is now actively circling around Nezalezhnaya, which is not doing well with its national tank "Altai". Who knows what can come of such cooperation? Then it is not surprising that the US military decided to re-drive the "Oplot" at their training grounds, which has so far been produced in very modest quantities. Wait and see.
Ctrl Enter
Noticed oshЫbku Highlight text and press. Ctrl + Enter
We are
Space shield of the Motherland: the West is not in vain afraid of Russian inspector satellites
New weapons on the way: What is known about the anti-satellite complex "Burevestnik"
Reporterin Yandex News
Read Reporterin Google News
2 comments
Information
Dear reader, to leave comments on the publication, you must sign in.