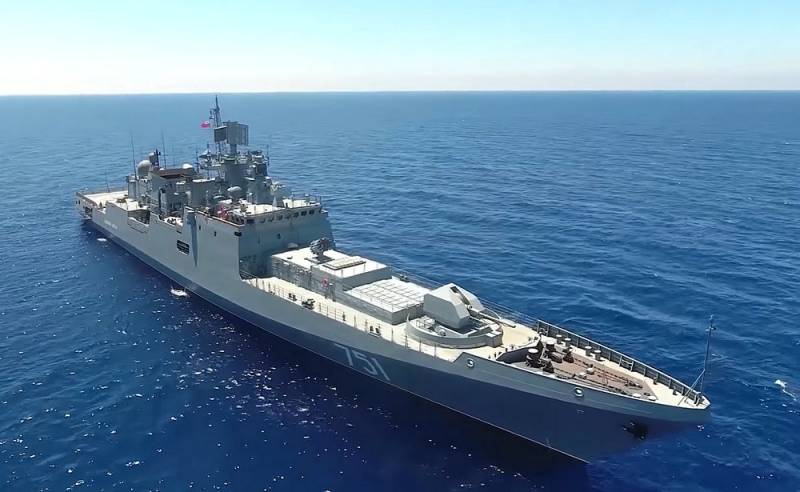 Against the background of the recent proposals of the Yantar plant for the Ministry of Defense for the completion of perhaps the most beautiful project of the fleet - the frigate of project 11356 (code "Petrel") "Admiral Kornilov", I decided to substantively analyze the question of how expedient it is to complete the fourth ship for the Russian Navy in its current form.


The issue requires discussion, since the frigates of this project (although formally they are nevertheless classified as patrol ships - TFR) have been repeatedly criticized from a number of sources about rather mediocre tactical and technical characteristics (TTX), primarily in terms of weapons. In this regard, let us dwell on the main combat systems of the ship: strike weapons, air defense and anti-aircraft defense.

With a rather impressive dimension of 3620 tons of standard displacement and 4035 tons of full, the frigate has only one vertical launcher 3С14 for 8 cells. Those. the ship of the far sea zone carries the same number of cruise missiles, as five times less in displacement MRK "Karakurt" pr. 22800 with its 870 tons of displacement! What is even more “surprising” is the truncated capabilities of the 3S14 launcher: according to the data of the OJSC “Design Bureau of Special Machine Building”, the frigate launcher only accommodates missiles of the Caliber 3M14 family, but does not allow the placement of products from the 3M55 complexes (Onyx anti-ship missiles) and 9K. Thus, the Burevestnik is inferior in its strike capabilities to the same Karakurt or the corvette of project 20385. Against the background of the Gorshkov-class frigate with its 16 cruise missiles on ships of the first series and 32 missiles on ships of the second series, project 11356 looks completely - so pale. Meanwhile, it is obvious even to a layman that there is more than enough space on the Burevestnik's bow deck to accommodate one or two additional UKSK units (subject to displacement of RBU-6000).

By the way, the air defense of this ship is perhaps its strongest side, since the main means of defense against an air enemy is a modern multi-channel medium-range air defense system "Shtil-1", suitable for repelling massive air attacks with simultaneous guidance of up to three 9M317M missiles to each target and the affected area at a distance of up to 50 km. The author does not question the effectiveness of this air defense missile system, given that he was essentially "suffered" during the factory tests of the "Grigorovich" and "Essen". Another thing is that the number of anti-aircraft missiles (24 units) raises questions about their sufficiency, especially in the conditions of single service by these frigates at a great distance from naval bases (naval bases). At the same time, the near-zone air defense in the form of two AK-630M anti-aircraft guns, located on the side, give a very small increase in the combat stability of the ship when defending against air attack weapons for a number of reasons. 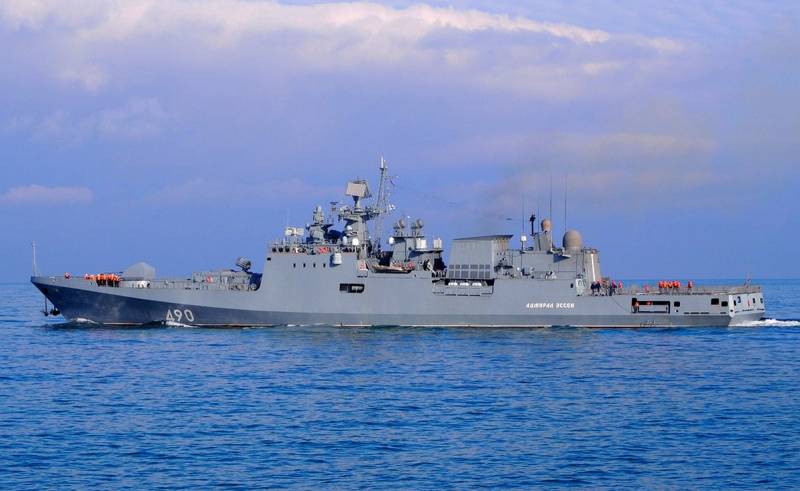 Thus, the circular probable deviation (CEP) of the AK-630M complex projectiles, according to the information contained in the specialized literature, is in the range of 4,0-4,28 mRad. Those. at a distance of 1500 m from the ship, the dispersion of shells from the aiming point is from 4 to 4,28 m, and the dispersion area will reach 40 square meters. Thus, in theory, for every 1000 shots fired from the AK-630M in the so-called. midsection of the anti-ship missile, will hit +/- 4 shells, which should be enough to destroy the missile in flight. But with a maximum rate of fire of 5000 rounds per minute, a burst of 1000 rounds takes 12 seconds. During this time period, even a subsonic anti-ship missile will fly at least 3000 meters, a supersonic one - at least twice as much. With the maximum range of the AK-630M of 5 km (effective 4 km), it becomes clear that this anti-aircraft machine gun, even in theory, can fight modern anti-ship missiles (especially with supersonic ones) on the brink of its capabilities. And this is even without taking into account the significant reaction time of the complex to the detected targets, as well as the difficulties in detecting subtle anti-ship missiles with the outdated ZAK radar.

Considering that the Indian versions of the frigate pr. 1135.6 "Talvar" instead of the AK-630M are equipped with the "Kashtan" air defense missile system, therefore there is enough space on the deck and under-deck space to accommodate analogues. It goes without saying that the option with the installation of modern complexes of the "Broadsword" / "Pantsir-M" type, which will significantly enhance the ship's self-defense capabilities, suggests itself.

The biggest complaint about the Burevestniki is the hydroacoustic complex. According to the official data of JSC Concern Okeanpribor, the outdated (more correctly arch-ancient) subkeel SJC MGK-335EM-03 Platina has a detection range of a submarine (with Re = 10 m) of only 10–12 km. At the same time, relatively modern GAS "Zarya" on projects 20380/22350 allow detecting submarines at a distance of up to 45 km. The frigate is completely devoid of a towed GUS! In fact, to send such a ship into the open sea without anti-submarine cover means knowingly sending it to slaughter. Apparently, this is precisely why the frigate 11356 lacks a modern anti-submarine and anti-torpedo system, but antiquarian torpedo tubes PTA-53 are placed: there is nothing to give out normal target designation, so there is no point in spending money on the same “Packet-NK”.


The situation is not corrected in any way by the placement of the Ka-27PL / M deck helicopter on the ship, since, firstly, it cannot carry out constant duty, and secondly, its lowered OGAS is capable of detecting underwater targets at even shorter distances than the ship itself - really not more than 8 km. On versions of the Ka-27M, the sighting and search device is absent from the word "completely", which makes it impossible to bring the helicopter to the target even if the enemy is detected. In fact, all the frigate's hope in terms of anti-torpedo defense is the RBU-6000 installation, which with its own salvo can create a continuous field of destruction in the path of enemy attacking torpedoes. However, these torpedoes still need to be detected ...

In general, it is obvious that the frigates of project 11356 in their current form have critical shortcomings, without the elimination of which it is pointless to count on their successful implementation of real combat missions in a real war (or at least their survival).

An immediate modernization is required with the replacement of almost all key combat systems (with the exception of the Shtil-1 air defense missile system), otherwise the presence of these three ships in the Black Sea Fleet (especially the possible completion of the fourth one) can be considered conditional. Without a doubt, spending budget money on the Admiral Kornilov without its deep modernization is unreasonable. Perhaps it would be much more rational to invest them in the 22350 frigate building program.
Ctrl Enter
Noticed oshЫbku Highlight text and press. Ctrl + Enter
We are
Space shield of the Motherland: the West is not in vain afraid of Russian inspector satellites
New weapons on the way: What is known about the anti-satellite complex "Burevestnik"
Reporterin Yandex News
Read Reporterin Google News
29 comments
Information
Dear reader, to leave comments on the publication, you must sign in.