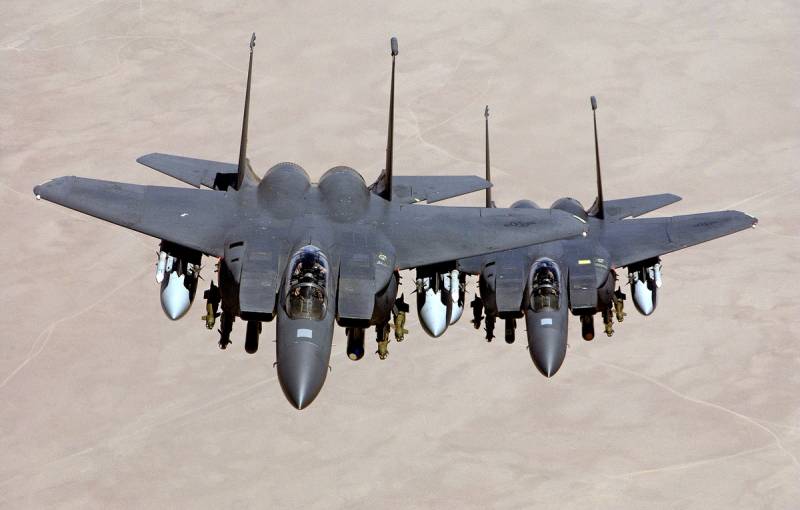 Presidents in the United States are changing, but the style of behavior of the "hegemon" in relation to those who are weaker than him, alas, is not. On the eve of the American Air Force bombed Syria, destroying several dozen militants of pro-Iranian armed formations who fought on the side of Damascus on the territory of another sovereign state. As the saying goes, find ten differences between Donald Trump and Joe Biden. What did the US Democratic Party want to say with this missile strike?


The new Permanent Representative of the United States to the UN was Linda Thomas-Greenfield, who echoed Sleepy Joe's words at his inauguration:

Multilateralism is back, diplomacy is back, and America is back.
And what is this renewed American diplomacy, what kind of "message" was it trying to convey to the rest of the world in Syria? Let's figure it out.

At first, undoubtedly Iran was the main addressee of the message. As you know, it was the US Democratic Party under Barack Obama that initiated the so-called "nuclear deal", which slowed down the development of the military component of the Islamic Republic's atomic program. In return, sanctions were lifted from it, and Tehran gained access to tens of billions of dollars frozen in foreign bank accounts. Everything changed dramatically with the arrival of President Donald Trump. The Republican proved to be Israel's greatest friend and began to put pressure on Iran in every way he could. Under Trump, the United States unilaterally withdrew from this international agreement and introduced new restrictive measures against the Islamic Republic.

Democrat Joe Biden, who served as vice president under Barack Obama, is expected to return to the "nuclear deal." Obviously, negotiations on this topic have already begun. However, in Tehran, it is clearly too much "lip rolled", according to the data of the TV company Al Jazeera. According to them, the Iranian authorities have counted $ 1 trillion in damage to their country from Trump's actions and are preparing to bill the United States. Iranian Foreign Minister Mohammad Javad Zarif said on this occasion:

Whether these compensations will take the form of reparations or they will take the form of investments is up for debate ... When we meet, we will increase the compensation.
A trillion dollars is a lot. What Washington thinks about this became clear almost immediately. The US Air Force launched a missile attack on pro-Iranian militants who were allegedly involved in the attack on the US military in Iraqi Erbil. Pentagon spokesman John Kirby explained that this was done on a personal order from President Biden. The hint that Tehran should buy a "lip-rolling machine" is more than transparent. It doesn't smell like a trillion. Washington has brutally brought its negotiating partner back to earth from the skies.

Secondly, The United States again showed the rest of the world that international law is not specifically written to it. Recall that the American military is on the territory of the sovereign state of Syria against the will of the official authorities, that is, de jure and de facto they are foreign invaders and invaders. At the same time, the Pentagon, without declaring war and sanctioning the UN Security Council, continues to strike at the Iranians allied to Damascus, who, by the way, fought against numerous terrorist groups in the SAR. And what is the difference between Republicans and Democrats? Yes, nothing.

Thirdly, the illegal air strike by the US Air Force can be considered a message to Moscow. Recall that Russia and Syria have been allies since the days of the USSR. Yes, our country has no direct legal obligations to Damascus to ensure the complete military security of the SAR, including air defense. This, by the way, is regularly used by the Israeli Air Force, inflicting airstrikes on Iranian military infrastructure with impunity. But, despite this, it is Russia that is positioned in the international arena as the main friend and protector of Syria. The way Washington has dealt with Iranian "proxies" is definitely a signal to the Kremlin that under the Democratic Party, the United States will continue to do whatever it wants in the Middle East. No positive changes can be expected with the departure of Donald Trump.

On the contrary. In his keynote speech, President Biden named China and Russia as the main opponents of the "hegemon", which will now be pressed in all possible directions. And, as we can see, Syria has become a trial balloon. Thus, the US military is expanding and strengthening its presence in the northeast of the SAR. There, following the short-range air defense systems, the more powerful Patriot air defense systems were deployed. The Pentagon is now digging in there, clearly not intending to go anywhere. As its own "proxy" in Syria, the United States will use the Kurdish armed formations, which should simultaneously counterbalance official Damascus, Ankara, Tehran and Moscow.
Ctrl Enter
Noticed oshЫbku Highlight text and press. Ctrl + Enter
We are
"We must beat first": the geopolitical alignment around Russia is continuously deteriorating
Ten "defeats" of Putin
Reporterin Yandex News
Read Reporterin Google News
28 comments
Information
Dear reader, to leave comments on the publication, you must sign in.