Why does the Kremlin support the Kiev regime 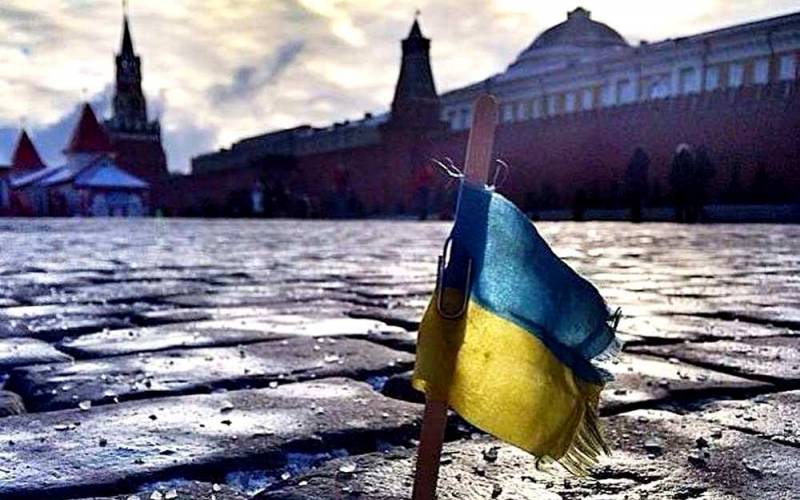 В previous article I told why the United States broke into Ukraine in 2014, financing a coup d'etat there, and explained why neither Putin nor Ukraine itself had a single chance to escape. In this text I will finish what I started and outline what shines for Ukraine and Russia with the advent of the new / old US administration and why Putin is feeding the Kiev regime.

In addition to the Ukrainian gas pipe as an element of pressure on the EU (which I talked about in the previous text), the United States also had its own selfish interest. There, it was quite rightly assumed to discover the presence of industrial reserves of shale gas in Ukraine. On the eve of the Maidan, two foreign companies entered in search of it. British-Dutch Shell has begun exploration drilling at the Yuzovskoye field with an area of ​​7 square kilometers with a projected capacity of 886 trillion cubic meters of shale gas. In November 4, she drilled two exploration wells, but was unable to conduct a full exploration of the field due to the hostilities in the Donbass (at least here Putin broke off their buzz).

Another, the Olesko field of 6 324 square kilometers, located in western Ukraine in the Lvov and Ivano-Frankivsk regions, its reserves were estimated at 3-3,5 trillion cubic meters of gas. The American company Chevron entered geological exploration and production of gas at this field, planning to invest more than $ 10 billion there. In November 2013, for this purpose, it signed an agreement with the Ukrainian company Nadra Oleskaya. However, in December 2014, Chevron suddenly decided to leave Ukraine, finally closing its office in 2015. The reason is banal, the cost of shale gas production in Ukraine turned out to be much higher than the cost of natural gas production in the traditional way. This is supported by the withdrawal of Chevron not only from Ukrainian, but also from Polish projects for the exploration of shale gas fields. Its production becomes profitable only at a gas price of $ 265-350. But the United States continues to work in this direction. If they manage to implement their plan to zero the transit of Russian gas to the EU, then the gas price will even exceed this level, and they will still return to their Ukrainian and Polish projects.

The shale boom in the United States itself was due to a cheaper method of its production (by hydraulic fracturing) compared to Ukrainian gas, which was located in hard-to-recover rocks, where such a method was not possible. The cost of drilling wells in Texas (USA), for example, was $ 3,5 million, in contrast to the Ukrainian one, where it reaches $ 15 million. Despite the fact that the Ukrainian resource base is many times larger than the American one, well productivity is only 1/10 of the US average, which puts an end to it for now.

However, the forward movement of the United States towards its world domination, which I described earlier, was unexpectedly suspended in 2016. And it was not Vladimir Putin who did it at all, and not even Comrade. Si, and upstart Trump, who won the 2016 presidential election, unexpectedly outstripping the evil old woman Shapoklyak, who was already resting on her laurels (sorry, Clinton). It was a blow in the stomach! The world globalist behind-the-scenes did not expect such a thing. And where? In my fiefdom - in the United States of America. After that black times began there.

The isolationist Republican Trump was diametrically opposed to the globalist Democrats. He did not fight for world domination, he tried to create a self-sufficient closed market in America. Not to expand in breadth, capturing new sales markets, as his opponents Obama and Clinton wanted, but to focus on the US domestic market, encouraging domestic producers and displacing foreign ones with high tariffs and trade wars. To do this, he printed out the internal reserves of hydrocarbons, lifting the ban on their export, which had existed since the 70s of the last century, after which the United States in one fell swoop turned from a net importer into a large net exporter, displacing such seasoned players as Saudi Arabia in this field. and RF (for oil), and Qatar and RF (for gas). In addition, he began to destroy and withdraw from all agreements on Transatlantic and Trans-Asian cooperation signed and cherished by Obama, turning to dust all the achievements of his predecessors in conquering new and redistributing old global markets. And the globalists could no longer tolerate this. This led to such desperate resistance and doomed Trump to inevitable defeat in 2020, when the Democrats went for an outright forgery, trying, by all means, to remove the unwanted upstart from office.

Now, with the arrival of Biden's team, we are witnessing a democratic revenge and a return to policy Obama sample 2014. What will this result in? Rollback on all fronts. With regard to Ukraine, the United States will not loosen its grip, it will continue to destroy it the economydriving them into debt through the IMF, deliberately reducing the load on the soil through accelerated natural population decline (due to increased mortality due to insufficient and expensive medical care), as well as by washing out the working-age population abroad. So that when, after the Nth number of years, this territory still gets to Russia, so that there will be scorched earth (in the literal and figurative sense of the word) with 10-15 million of the remaining population (and the agrarian power does not need more). The Americans are likely to privatize the Ukrainian pipe as a national treasure in order to further influence Europe by creating a consortium of owners with the participation of Germany, the United States and representatives of the banana republic. I do not expect an escalation of hostilities until the native administration has fulfilled all that was entrusted to it, so the Biden administration will not risk the expected defeat in the war with the Russian Federation. Most likely, this will become possible closer to 2024. Then this stillborn corpse will be transferred to the balance of the Russian Federation, imposing sanctions on the Russian Federation for this. But is it necessary for the Russian Federation itself and what should the Kremlin do in this situation?

I do not presume to give advice to Vladimir Vladimirovich, but it is worth remembering the era of the USSR. To create a self-sufficient closed-cycle market in the Russian Federation, Russia has everything except the human factor - for this it needs to accumulate a population of at least 300 million people on its territory. At the moment, there are only 145 million, where to get the missing 150? That's right, try to return the former Soviet republics, and maybe even the former socialists, to the orbit of their economic interests and their economic influence. countries (which may well become possible as the EU weakens).

Most likely, it is this factor that explains for many the Kremlin's incomprehensible behavior in supporting the Kiev regime by supplying it with electricity, coal, gas, diesel fuel and other import items that are critical for the existence of the country and its population. The Kremlin is not interested in creating a European version of Somalia on its southern borders, with the inevitable population creep in this case. Moscow still hopes to expand its market cluster at the expense of him and at the expense of other former republics. Although, given what cyclopean difficulties in this direction we are experiencing even with brotherly Belarus, the task may turn out to be unsolvable (or solvable, but only in the very distant future, they can only be pushed to this by a common EU member as the globalists' plans move towards world domination) ...

Also, the Russian Federation needs to make the most of its geographical position as a bridge between East and West, not only overland, as part of the Chinese New Silk Road project, but also sea, as it masters year-round navigation along the Northern Sea Route. The Tokyo-Moscow-Berlin axis is Washington's nightmare, an alliance of continental powers (although Japan is considered a maritime one), which will lead to the collapse of the entire concept of the post-war world order, which assumed the vassal dependence of the countries that lost in World War II (Japan and Germany) on the United States by creating on their territory of American military bases. That is why the States lay down with bones under the SP-2, in order to prevent the FRG not only from gaining energy independence from the pro-American gas gaskets (Ukraine and Poland), but also to avoid a potential German-Russian continental alliance (this is a nightmare not only for the United States, but also for Britain with from time immemorial, all wars between Russia and Prussia were inspired by the Anglo-Saxons).

By the way, back in 2009 (after the famous gas war between Kiev and Moscow), the States already tried to squeeze out Russian pipeline gas from the European market by laying the Qatar-EU gas pipeline through the territory of Saudi Arabia, Jordan, Syria, Turkey, and then joining the Nabucco gas pipeline ". Qatar, for a second, has, along with Iran, the largest proven gas reserves in the world. You know how Bashar al-Assad ended, who was faithful to his allied obligations to the Russian Federation and did not allow the pipeline to be laid through his territory. In 2011, the States, with the hands of their Middle Eastern vassals, unleashed a war against him, and now you understand why the Russian Federation has been fighting there since 2015. If you think that for Assad, then you are deeply mistaken, the Russian Federation is fighting there for itself and its economic interests.

This concludes the review. I think there will be no more questions after him. People die not for metal, but for transit. Logistics is everything! I hope the Kremlin will take into account my wishes.
Ctrl Enter
Noticed oshЫbku Highlight text and press. Ctrl + Enter
We are
Warsaw's "shale failure": there will be no Polish strike on Gazprom
Peace enforcement operation. Russia inflicts a preemptive strike on Kiev
Reporterin Yandex News
Read Reporterin Google News
19 comments
Information
Dear reader, to leave comments on the publication, you must sign in.