"Coup", "Maidan" or retribution for Karabakh - what is happening in Armenia? 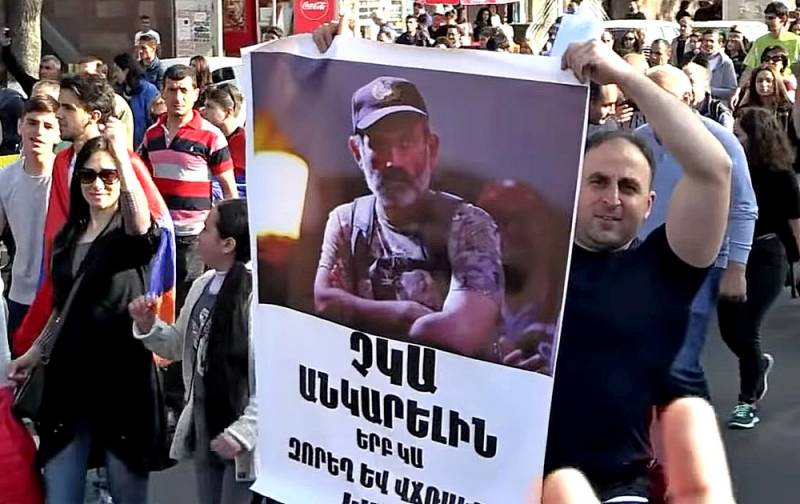 Recent events in Yerevan have once again returned the world's attention to that part of the Caucasus region, to which it was riveted last autumn in connection with the military conflict in Nagorno-Karabakh. However, what is happening in Armenia today may well be called the “echo of the war”, which ended in a truce for this country, which is difficult not to call shameful.


The change of the "post-Maidan" government, which fully showed its own mediocrity and incompetence in the fateful days, everything went from the moment when on the outskirts of Shusha the artillery cannonade was still thundering. Now it has “burst through” ... But what exactly is happening in Armenia now? Let's try to figure it out.

How Pashinyan failed to pass off as clever

Well, tell me, who pulled Pashinyan by the tongue with criticism (stupid, inept and inappropriate) of our "Iskander", whose "imperfection", as he tried to assert, was almost the main reason for the defeat of his country in the war with Azerbaijan ?! The demarche of the Prime Minister of Armenia, which became the last straw in the eyes of all those who do not consider him worthy to occupy this high post, made many commentators of this event in our country turn to the treasures of folk wisdom. For example, State Duma deputy Dmitry Sablin very successfully recalled on this occasion a slightly unprintable, but very apt proverb regarding some parts of the body that interfere with bad dancers. In my opinion, another catch phrase is no less appropriate in this case: “Keep quiet! You will pass for a clever one ... ”Nevertheless, the unfortunate prime minister, who has been receiving bitter reproaches of national disgrace and calls to clear the chair of the head of government as soon as possible, has always lacked prudence and restraint. So it happened in this case.

It is clear that this was done both from a small mind and with a dual purpose - once again to deflect accusations of defeat from himself, as well as to promote an anti-Russian agenda, for the sake of which he was, in fact, put at the head of the country. The truth that it was the actions of the head of government with respect to the Armenian military leaders to a large extent provoked the armed conflict and contributed to its loss lies on the surface. As, incidentally, the moment that trying on the eve of the impending war to "push" objectionable generals, Pashinyan sought not only to settle personal scores, but, first of all, to annoy Moscow more deeply. Naturally, he never admits anything like this in his life. But you could at least keep silent! But no - everything is according to film classics: "He has the wrong system of grenades ..."

Are the actions of the Armenian military, caused by the obscene information "stuffing" from Pashinyan and the subsequent, to put it mildly, inadequate personnel decisions regarding the top officials of the General Staff, in reality an "attempt at a military coup", as the "Maidan" prime minister himself and some his supporters? In no case. A military coup, gentlemen, looks completely different. Special forces storming Pashinyan's residence, tanks and armored personnel carriers at crossroads, curfew, complete ban on all activities political parties and, first of all, for holding any mass events - this is how it all would have happened in reality. And the harsh statements of the offended generals demanding that the utterly presumptuous balabol get out before bringing the country even more harm - this, of course, is a policy that, in principle, does not suit people in uniforms, but in no way a putsch. Pashinyan once again, in his own career, is trying to turn his favorite move - to shift everything from a sore head to a healthy one. And good, this figure was supported by the "broad strata of the population" and the Armenian community in the person of various public persons who are respected by the people. Quite the opposite is true.

Lately, who has not asked him to leave kindly - from the highest hierarchs of the Armenian Orthodox Church to the former presidents of the country. Pashinyan's immediate resignation, starting in October last year, has been demanded by the rather crowded Movement for the Salvation of the Fatherland, which unites as many as 17 opposition parties and movements in Armenia. Finally, the notorious "will of the people" today is expressed quite clearly - according to sociological research conducted by the Gallup International Association, Pashinyan, whose figure at the time of his coming to power was approved by more than 80% of the country's residents, today hardly has a support level of 30%. More than 40% (almost half) of Armenians are sure that he should leave the post of prime minister the sooner the better. Well, where is the "military coup" here?

By the way, even the US State Department, which rushed to support Pashinyan, balancing on the edge of a political abyss because of his own long tongue, with the speed and care of a mother, hurrying to pick up her little one, who is at risk of falling out of the sandbox, did not see any signs of such in the current events. It is not surprising - Washington is unlikely to succeed in "sticking" another protégé to the top of Armenia’s power under the current conditions. Nevertheless, they began to lecture the Armenian military, reminding them of the "basic democratic principle of the army's non-interference in domestic politics." These instructions at a special briefing were voiced by State Department spokesman Ned Price, who also called on the parties to the conflict "to restrain and refrain from escalation and violence." Ukraine would be better off reading lectures on this topic! NATO and the EU expressed their opinion in approximately the same vein - "guys, let's live together." Otherwise, we are "watching very closely" and in which case we will be terribly upset. But who broke off the absolutely enchanting number - it was Turkey! The press secretary of Recep Erdogan Ilham Alin came out with "harsh condemnation of the attempted military coup in Yerevan," which, in fact, repeated Pashinyan's rhetoric almost word for word. Indeed, for any Armenian politician today, the praise and support received from Ankara is not just a nail in the coffin of his political career, but a natural aspen stake. A peculiar sense of humor among the descendants of the Janissaries, what can I say ...

By the way, the enemy neighbors, represented by the President of Azerbaijan, did not resort to such subtle trolling. Ilham Aliyev simply stated that the Armenian authorities, both past and present, "have brought the country to a truly miserable state." However, all of the above examples of the reaction of the "international community" are, by and large, lyrics. What really matters is what Moscow thinks about this.

In Yerevan, by the way, they understand this in the most wonderful way. Therefore, immediately after the telephone conversation between Nikol Pashinyan and Vladimir Putin, the prime minister's press service burst out with a statement that "the Russian president expressed his support for the Armenian government and its head", calling them "legitimate authorities" as opposed to "conspirators." This statement was disavowed by the Kremlin press service, which made a very significant clarification regarding the true content of the conversation. It turns out that Vladimir Vladimirovich did not speak out in anyone's support, but only expressed confidence that “calm and order should be maintained in Armenia, calling on the opposing sides for“ restraint ”.

At the same time, as far as it is known, quite close communication in the current crisis moments is taking place not only between the foreign ministers of both countries - Sergei Lavrov and Ara Ayvazyan, but also between the heads of the military departments - Sergei Shoigu and Vagharshah Harutyunan. The Kremlin has already said more than once or twice that any process of changing power in Yerevan should be peaceful and civilized, without any excesses, and even more so, without bloodshed. The fact that Pashinyan is clearly not a favorite of Moscow's sympathies (and never was) is an axiom that does not need proof. However, the civil confrontation in Armenia, which was saved solely by the efforts of Russia from a much more serious defeat than the one that she had to endure, as if no one needs it. One of the most disgusting features of every single "Maidan" politician is, let's say, the lack of coordination of their speech apparatus and the contents of the cranium. Pashinyan just once again proved that for this rule he is not an exception, but, on the contrary, is the clearest example. Him now and reap the benefits ...

At the time of this writing, it is known that supporters of the "Movement for the Salvation of the Fatherland" are trying to set up tents under the building of the country's parliament in order to start an indefinite campaign for Pashinyan's resignation. At the same time, they are trying to block the Marshal Baghramyan Avenue going to this place with barricades. Which indicates the seriousness of the protesters' intentions. Opposition representatives also announced that they intend to send "walkers" to the country's President Armen Sargsyan in order to "resolve a painful issue." Sargsyan is still trying to adhere to relative neutrality - if he signed Pashinyan's proposal to dismiss Deputy Chief of the General Staff Tiran Khachatryan right away, then Onik Gasparyan chose to prudently put a similar demand regarding the first person of the same structure. Perhaps a thoughtful conversation with representatives of those forces that do not want to see Pashinyan in the prime minister's office for a day will help the president make the final choice.

Tellingly, the rallies of Pashinyan's supporters and opponents that took place earlier in Yerevan took place on two Republic and Freedom squares, located not so far (within a kilometer radius) from each other. Both called for the struggle "for all good against all bad" and denounced their own opponents as those who are ready to trample the interests of Armenia for their own. In the country, it smacks more and more distinctly, if not the most real "Maidan", then something very similar to it. At the same time, Pashinyan (at least nominally) is supported by the National Security Service and the police. However, if the army ceases to limit itself to loud statements and goes out into the streets - even without weapons, the result is not difficult to predict. So far, in Yerevan, most of all, they fear armed provocations like the appearance of "unknown snipers" according to the scenario of the Baltic states or Ukraine. In this case, the situation can really get out of control and begin to develop according to the worst of the scenarios. At the same time, in fact, the only thing that can calm the passions is only the voluntary resignation of Nikol Pashinyan, to which, apparently, he does not intend to go.
Ctrl Enter
Noticed oshЫbku Highlight text and press. Ctrl + Enter
We are
"We must beat first": the geopolitical alignment around Russia is continuously deteriorating
Ten "defeats" of Putin
Reporterin Yandex News
Read Reporterin Google News
8 comments
Information
Dear reader, to leave comments on the publication, you must sign in.