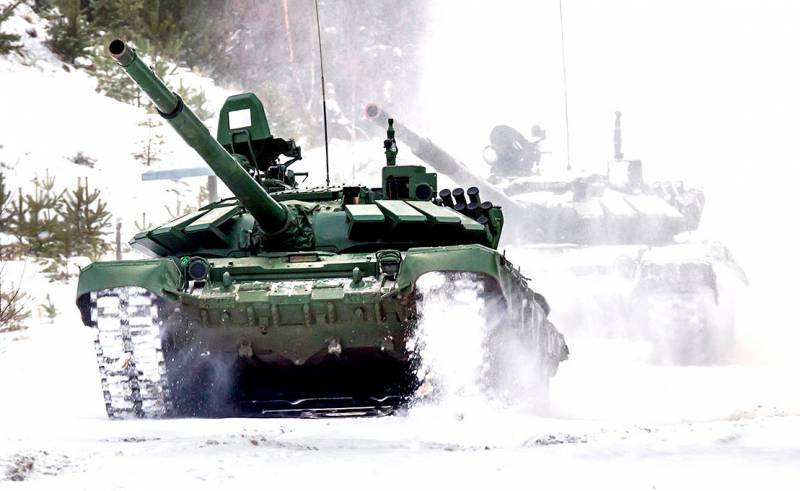 Against the background of News about the long-awaited start in 2022 of the serial production of the T-14 "Armata" tank, the message about the upcoming deliveries of armored vehicles in 2021 looks extremely curious. So, according to the information of the Ministry of Defense of the Russian Federation, by the end of this year, more than 800 units of a new and modernized armored vehicle are planned to enter the formations and military units of the Ground Forces of the RF Armed Forces. equipment... In total, according to the military department, the troops will receive more than 90 T-72B3M tanks, about 80 T-80BVM units with a gas turbine power plant, a batch of T-90M "Breakthrough" tanks, some of which will be transferred by the manufacturer to the Kazan Higher Tank Command school for training future tank officers. In addition, more than 120 BMP-3 infantry fighting vehicles, over 280 modernized BMP-2M with a Berezhok fighting compartment, as well as about 300 BTR-82A and BTR-82AM armored personnel carriers will be delivered to formations and military units.


It would seem, at first glance, impressive delivery rates: about 200 units of tanks alone. For comparison, this is almost the same as the total number of tanks available from the German Bundeswehr (245 units) or from the British Armed Forces (227 units, it is planned to reduce to 148). However, with such planning for the rearmament of the tank fleet, there is a significant flaw - this is the persistence of Soviet problems with the diversity of equipment: for example, together with the T-14, the pilot batch of which should go to the troops this year, several more types of basic battle tanks (T-72B3 / B3M, T080BVM, T-80U, T-90M). Taking into account the long-awaited release of the industry for serial production of modern T-90M and T-14 vehicles, it is difficult to understand the logic of the military department, which continues to modernize the Soviet T-72B on a truly industrial scale. At the same time, judging by S. Shoigu's statements, there are plans to modernize the entire T-72B * fleet to the level of T-72B3M, i.e. Taking into account the current pace and size of the T-72B / B3 fleet, the modernization will be carried out for at least another whole decade.

Of course, the Ministry of Defense can be guided by considerations of economy and try to "squeeze" the maximum possible out of the T-72 platform, partially covering the army's needs for modern vehicles. But in this case, much more questions arise about the modernization of another tank - the T-80BVM, the operating cost of which is an order of magnitude higher than any diesel armored vehicle. In order not to be unfounded, it is worth referring to the collection of IN Baranov “Chief Designer V.N. Venediktov - Life given to tanks ", where literally the following is written about the gas turbine T-80:

In general, the T-80 would be an ideal tank, if not for two of its features: monstrous real fuel consumption and unimaginable cost. In the performance characteristics of the T-80 tank, the power reserve looks pretty decent. However, in reality, the power reserve multiplied by the coefficient of the average qualification of the driver and the conditions of movement in the column turns into a scanty value. I know of cases when fully fueled T-80 battalions got up "dry" after 160-180 km. The second issue is cost. I am sure that if, God forbid, a big war began, the next day all factories would switch to the production of T-72. And the T-80, at best, would be enough for one operation of the initial period of the war. As a tanker - a member of the crew, I was delighted with the capabilities of the T-80U and still consider it the best tank for passing final checks. But as a tank commander, I understand that the T-80 is not a "military" tank. Was there any point in keeping production of the T-80 earlier or restoring it now? It seems to me that there is no point in this.
Such a characteristic raises many questions about why these "gluttonous" combat vehicles of the Russian army (albeit noticeably updated) were needed, because back in 2009 it was planned to completely abandon them in order to unify the tank fleet! It would be much more rational to redirect financial resources to the large-scale construction of new and modern tanks, replacing obsolete models with them, than to modernize 40-year-old (or even older!) Soviet "veterans". Moreover, UVZ (manufacturer of T-90M and T-14) has already promised to reduce the cost of its products in the course of mass production **.

But much more perplexing is the recently launched modernization of the BMP-2 into the BMP-2M version, as well as the ongoing purchase of new BTR-82A and the modernization of the old BTR-80 to the level of the BTR-82AM. These armored combat vehicles (AFVs) are hopelessly outdated morally and constructively, especially in terms of protecting the crew and landing forces, due to which no modernization can fundamentally change something in this regard. So, all of the listed armored vehicles have only bulletproof booking. Since the days of Afghanistan, there have been cases when the BTR-80 (and the armoring of the BTR-82 is almost no different from its predecessor) was pierced from a 7,62-mm machine gun into the side! The BTR-82, due to its low profile, is devoid of a V-shaped bottom and "suspended" seats, and therefore the explosion of a mine under the bottom leads to fatal consequences, due to which the infantry prefers to move on armored personnel carriers. Similar problems are observed with the BMP-2. The persistence of the Ministry of Defense in saturating and modernizing the armored fleet of motorized rifle troops with these outdated models is even less amenable to a reasonable explanation, given the presence of two ready-made modern platforms - Kurganets-25 and Boomerang, devoid of most of the shortcomings of Soviet armored combat vehicles and are actually at the stage of state testing.

The dubious logic of the current plans to re-equip the Russian army is increasingly becoming a topic for the attention of authoritative experts. Loud statements about the high percentage of modern equipment in the ground forces for testing have little to do with reality, since the same modernized armored combat vehicles mentioned above cannot be modern by definition. In turn, the situation with the diversity of armored vehicles as a whole line of armored vehicles on the basis of new combat platforms enter the troops will only get worse, and taking into account the procurement carried out by the Ministry of Defense policy there are no prospects for fixing it in the foreseeable future.

** The cost of one T-14 MBT based on the "Armata" is currently 250 million rubles, the price is planned to be reduced due to serial production, technology development, reducing labor intensity and increasing manufacturability.
Ctrl Enter
Noticed oshЫbku Highlight text and press. Ctrl + Enter
We are
Tank confrontation with the Russian Federation: how Ukraine will respond to the T-72B3, T-90M and "Armata"
Russia was able to collect combat vehicles superior to the enemy from old tanks
Reporterin Yandex News
Read Reporterin Google News
21 comment
Information
Dear reader, to leave comments on the publication, you must sign in.