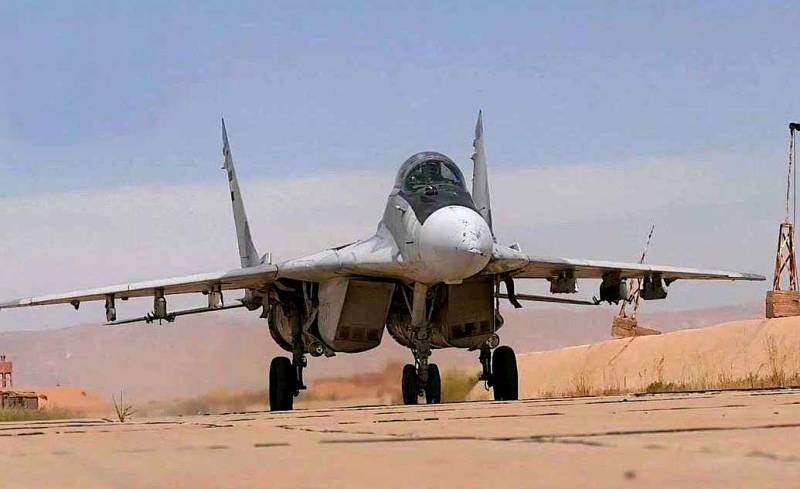 Turning the tide of the war with the rebels, official Damascus was able to pay more attention to its aviation in order to counter the more serious threats in the face of Turkey and Israel. Recently Syrians got another batch of MiG-29 fighters from Russia, but how efficient the Syrian Air Force is, we will now try to find out, writes the American edition of Military Watch.


Currently, modifications of the MiG-29 fighter are the most combat-ready aircraft in the SAR. All other types of fighters simply do not make sense to consider. The MiG-25 is incredibly expensive to operate for Damascus, and the MiG-23 is morally and physically outdated. Over the past almost 10 years of war, little has remained of the once powerful air force. Many planes were destroyed on the ground. Therefore, Damascus decided to invest in the MiG-29 as the most optimal option for its performance.

Since 2019, the Syrians have begun not only to expand their MiG-29 fleet with new and more advanced machines, but are also gradually modernizing early modifications of these fighters received from the USSR during the Cold War. The MiG-29 was designed to outperform the United States Air Force F-16 and F / A-18 light and medium fighters in aerial combat. During the unification of Germany, it turned out that the MiG-29 surpasses Western fighters in its flight characteristics, and the short-range air-to-air missiles R-73 give it an even greater advantage at close range. At the time of the collapse of the USSR, Syria had three squadrons of MiG-29A (30 units), but without modernization, they are not able to compete in the sky with the aircraft of their closest neighbors.

Syrian MiG-29 attacks militants during raging conflict
Syria today faces significant threats from Turkey and Israel, which rely on the F-16C / D / I as their primary fighter. That being said, Tel Aviv also has a number of heavier and more powerful F-15s that have violated Syrian airspace in the past. And recently, the Israelis also got the F-35.

In 2020, Syria received its first MiG-29SMT from Russia. The initial order implied the delivery of a more advanced MiG-29M, but the war made its own adjustments. The MiG-29SMT is a base glider of the MiG-29A, modified to approximate its characteristics to the MiG-29M. It has a Zhuk-ME radar, new avionics and multifunctional displays in the cockpit.

At the same time, the MiG-29SMT contains more fuel and, thus, increases its flight range to 2100 km. The relatively short flight range of the MiG-29A was a serious drawback.

The added weight due to the greater amount of fuel is compensated by the integration of Series 33 RD-3 engines, each of which develops 81 kN thrust - more than the old RD-33 engine. However, unlike the MiG-29M, composite materials are not used in the aircraft's construction.

In the 2000s, Syria began modernizing the MiG-29A fleet. They are armed with R-77 medium-range air-to-air missiles (up to 110 km). In 2019, the Syrian Air Force MiG-29A installed onboard electronic warfare systems "Talisman" (Belarus). These changes allowed the MiG-29A to somewhat narrow the gap with the Turkish and Israeli air forces.

The progress of the Syrian Air Force is clearly visible, but the MiG-29SMT is absolutely not enough to withstand its neighbors. Given that Damascus is an ally of Moscow, it could well buy the latest MiG-35. Then the Syrian Air Force may become one of the strongest in the region in the future. Much depends on how soon Damascus can restore its the economyto be able to purchase new combat aircraft.
Ctrl Enter
Noticed oshЫbku Highlight text and press. Ctrl + Enter
We are
Space shield of the Motherland: the West is not in vain afraid of Russian inspector satellites
New weapons on the way: What is known about the anti-satellite complex "Burevestnik"
Reporterin Yandex News
Read Reporterin Google News
36 comments
Information
Dear reader, to leave comments on the publication, you must sign in.