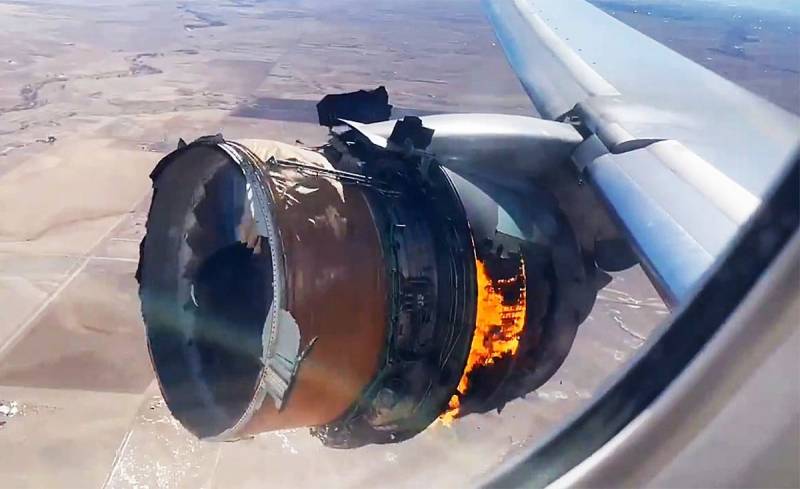 
Again investigations and technical expertise, refusal to operate, possible lawsuits and claims ... Bad luck continues to haunt the American corporation. Let's try to figure out what is happening with the aviation giant today and how serious problems it is experiencing.

"He disappeared, having lost the fuel, all fell to pieces ..."

Really, the impression is beginning to appear that some kind of evil fate prevails over Boeing. On February 20 this year, at the cargo side of a Boeing 747-400F, which took off from the Dutch Maastricht airport, one of the four engines suddenly caught fire right in the air. After that, he literally began to fall apart into its component parts, which fell on the heads of the locals and their cars, who were pretty taken aback by such a surprise. A couple of people (an elderly woman and a child) even had to be hospitalized. Fortunately, the pilots managed to reach Liege, located three dozen kilometers away, but already on the territory of neighboring Belgium, and there land quite safely. Much more dramatic events unfolded at the same time on the other side of the planet - in the United States.

There, a United Airlines Boeing 777-200 passenger airliner, performing the most ordinary flight from Denver to Hawaii, managed to fly only half an hour before it started having exactly the same problems as its cargo “brother” in the skies of Europe. The right engine of the plane first started to smoke, then flared up, and then everything went according to the quote from Vysotsky's song given in the subtitle. The liner, on board of which there were 231 passengers and 10 crew members, did not disappear. But then pieces of his engine showered the area from Denver to Bloomfield, Colorado. Thanks to the professionalism of the pilots, it was possible to return the emergency vehicle to the take-off site and land it, so carefully that not a single passenger was injured. Happy ending? Not really - at least for Boeing. Its representatives, who after the tragedies in Indonesia and Ethiopia prefer to reinsure themselves a hundred times in any emergency situation, immediately called for the termination of flights of all 777 models equipped with Pratt & Whitney 4000-112 engines, the same as the one that failed in Denver.


According to experts, today 69 such machines are actively used all over the world, another 59 are in conservation storage, "grounded" by the coronavirus pandemic. In addition to United Airlines themselves, which have 24 such aircraft in their fleet, Boeing's advice was also followed by aviators from Japan and South Korea, who are the main operators of this model outside the United States. In the United States itself, not only the country's Federal Aviation Administration (FAA), but also the National Transportation Safety Board (NTSB) joined the investigation as quickly as possible. The specialists of the latter, by the way, have already announced the first preliminary versions of the causes of the accident - most likely, this was caused by the fatigue of the metal in the engine blades, which, self-destructing, pierced its outer skin and "fired" into the surrounding space. What can you do, technique there is a technique - from time to time it fails, fails and breaks down.

Minor incidents with Pratt & Whitney engines have been noted on Boeing liners earlier, however, one of them failed in the air for the first time in the history of use. Fortunately, the company has produced only 128 aircraft equipped with them. Most 777s have GE90 engines from General Electric. Nevertheless, some especially vigilant gentlemen today propose to ban flights of every Boeing 777 and subject them to an intensive check for the serviceability of everything that is possible. As soon as one real incident happens, and here it is not far from the general panic. A few days after the events described above, on February 23 in the United States, a Delta Airlines Boeing 757-200 passenger liner made an emergency landing at Salt Lake City airport. At the same time, the pilots reported an engine breakdown to the ground, but the equipment and firefighters who arrived at the landing site did not find any signs of such. Soon the pilots will start to shy away from just one word Boeing ...

Weren't you in a hurry with the "amnesty"?

All these events are, to put it mildly, very untimely for the corporation, which barely managed to breathe a sigh of relief after the return to the sky of the "outcast" Boeing 737 MAX airliner became reality. The first in this matter were the airlines of the USA, Canada and Brazil, which at the end of last year officially started operating these machines on their lines after many months of their forced downtime. However, a real "breakthrough" for Boeing Co. was the decision of the European Aviation Safety Agency (EASA), announced at the end of January this year, which finally opened the Old World sky for the 737 MAX. According to EASA Executive Director Patrick Kaye, the organization has conducted its own thorough research, "completely independent" from both Boeing itself and the US Federal Aviation Administration. At the same time, its specialists “were not subjected to any pressure as in politicalAnd in economic planes ". In a word, everything is fair and objective. According to the conclusions of the EASA experts, Boeing's "meticulous modifications" of the corresponding software and equipment made the 737 MAX an "absolutely safe" winged aircraft that Europeans can trust with their lives without the slightest doubt.

It must be said that such optimism did not arouse the approval of a very large group of people who are directly related to the issue of the safety of “problem” airliners - relatives of the victims of the plane crashes in Indonesia and Ethiopia, which brought the 737 MAX the sad “glory” of the killer plane. At the end of last year, when the European Aviation Safety Agency announced only preliminary intentions to allow these airliners to fly to the EU, they turned to Patrick Kai with an official letter in which they categorically objected to such a decision.

The document said that it should be accepted only on the basis of ardent assurances from the Americans that all the defects of the machine could not be eliminated in any case. At the same time, the authors of the letter referred to the report of the members of the US Senate, which provided evidence that the collusion of some FAA representatives with the leadership of Boeing Co. in the course of testing the 737 MAX has already occurred at least once. The relatives of the victims categorically demanded that EASA not only independently assess the safety of the “modified” liners, but also specifically explain to potential passengers how the changes made by Boeing would improve their operation. At the same time, I would not like to suspect the authors of the appeal in banal self-interest and a desire to organize another attack on the company's reputation in order to get any more compensation from it. On the one hand, Boeing Co. did not skimp on payments to the families of the victims - only from the special fund of the corporation they were transferred about 50 million dollars. At the same time, the company promised to “spend on education” the same amount of those relatives of the plane crashes who intend to receive it.

On the other hand, since all these compensations do not provide for the refusal to file the corresponding legal claims, things could turn out much worse for Boeing. According to American lawyers, if the cases are tried in the courts of the state of Illinois, where the corporation's headquarters are located, a law may be applied, according to which it will have to pay for every minute of the deaths of the victims. In this case, the amount of claims can easily exceed a billion dollars. Moreover, with a fairly serious chance of their satisfaction.

Be that as it may, according to the official financial report of the Boeing Co., published on January 27 this year, 2020 was not just a disaster, but a disastrous year for one of the world's largest aircraft manufacturing giants. The company's loss reached a record figure for its entire existence - almost $ 12 billion. Revenue fell, in fact, by a quarter - to a volume of over 58 billion dollars. Back in 2019, it exceeded 76 and a half billion, and the losses were estimated at only $ 636 million. In fact, the company is "afloat" solely thanks to the collaboration with the Pentagon and NASA. The earnings of its defense and space divisions were the only positive indicator, increasing by 2020% in 2 to $ 6.8 billion. In everything else - from the sale of commercial liners to service maintenance - there was only one recession and continuous losses. The situation with the 737 MAX played an important role in all this - after all, before the production of aircraft of this model was stopped in January 2020, Boeing managed to “stamp” four hundred such aircraft, which were “hanging” on its balance sheet as a dead weight. Removing all suspicion from this liner and returning it to service is vital to the survival of the corporation. At the same time, even positive decisions of EASA are far from being a final victory.

Do not forget that about 25% of sales of exactly 737 MAX were in China. Today in the Celestial Empire they refuse to buy even previously ordered aircraft of this model - they say, of course, we have a lot of people, but there are no extra people to risk them because of your unreliable machines. We do not believe your assurances of their safety, so we'd better build our own liners. There is no doubt that this position has a fair amount of political overtones due to the "trade war" waged between Washington and Beijing. However, the Chinese comrades are also concerned about saving the lives of their own fellow citizens. They are in no hurry to lift the ban on flights of 737 MAX in India, which also represents a very vast and promising market for the company.

Naturally, in such conditions, every accident, in the news about which the aircraft produced by it appear, for the corporation - that a knife is sharp. It seems that she now, like some of her cars, is experiencing a certain "fatigue" of their own foundations and foundations. It is not yet clear whether Boeing will be able to overcome the "turbulence" that has hit it and "get on the wing" again.
Ctrl Enter
Noticed oshЫbku Highlight text and press. Ctrl + Enter
We are
Will Boeing's revenge succeed? How the 737 MAX tries to return to the sky
Boeing slaughtered: the fall of the aircraft giant continues
Reporterin Yandex News
Read Reporterin Google News
8 comments
Information
Dear reader, to leave comments on the publication, you must sign in.