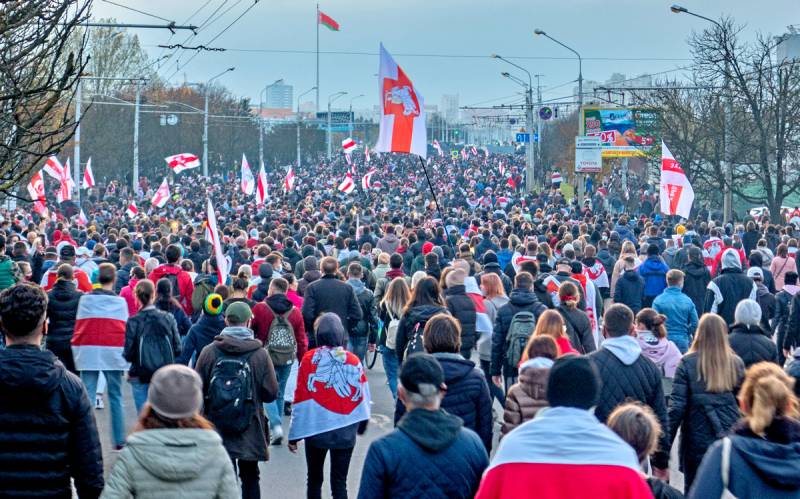 It just so happened that the course of events that have disturbed Belarus since the end of last summer is actually determined far beyond its borders. No, no one takes away the laurels of the "Maidan winners" from the local president Alexander Lukashenko and local "siloviks" who have shown standard resilience and loyalty to duty. No one can also deny that the Belarusians have much more elementary common sense and worldly wisdom than their closest neighbors, the Ukrainians.


However, it would be fundamentally wrong to view the situation in this country outside the context of the global geopolitical “game”, in which it was destined for extremely unenviable roles as a bargaining chip and another “springboard for victorious democracy”. However, this did not happen - and we will try to figure out the true reasons for the defeat of the "color revolution" there.

Today, the domestic media recklessly cites the bitter confession of the leader of the Belarusian "opposition" Svetlana Tikhanovskaya, who, in fact, signed the complete failure of the adventure, which she tried to carry out with the hands and hands of her supporters. However, at the same time, it is somehow forgotten that until quite recently, literally at the end of January of this year, this lady, as well as the motley gang of “zmagars” headed by her, made completely different speeches. They were full of optimism and “creative plans”. On January 27, this audience, consisting of representatives of the “office” of Tikhanovskaya herself, the “Coordination Council” and “People's Anti-Crisis Management”, discussed no less, but the “Victory Plan-2021”. It was about preparing new mass actions - both in February and in the spring. "We are in the majority, we are working to bring our victory closer, protest activity and pressure on the regime will grow!" - such optimism shone on the "Maidan people", trying to play "real revolutionaries".

As far as we know, in the near future they were going to hold some regular "representative conference", after which they "make public the details" of their own grandiose victory plan. “Di erst to a column of marshirts ...” And instead of all this, the “president of the Light” states with a sad look: “we have lost the street” (as if we once owned it!), “The regime has strength and weapons,” and we - orphaned and poor, absolutely incapable of anything. “It seems we have lost ...” It is necessary to be baptized in such cases! However, what am I talking about ... This advice is definitely not for Tikhanovskaya. Whatever it was, but the "leader of the protests", in fact, openly states their complete failure. At the same time, promises to "return and continue" sound extremely unconvincing - the "president of the Light" is not at all drawn to the Terminator ... So what really happened?

In order to grasp the essence of the issue, we will have to build a chain of events that preceded Tikhanovskaya's self-exposing speech. And here, first of all, attention should be paid to the plenary session of the European Parliament, which took place in the 20th of January (that is, just when the “zmagars” were still chatting about their “imminent victory”), at which the “Belarusian question". The report on it was presented by the deputy from Lithuania Petras Aushtrevičius, which in itself testifies to the lowest rating of the “problem” in the eyes of MEPs. In addition, everyone knows very well how biased and selfish the position of Vilnius is in the Belarusian crisis, so that any information coming from there, as they say, is “divided by a hundred”. By the way, Aushtrevičius, speaking under the vaults of the EU parliament, behaved "in the best traditions of the genre" - he reduced everything to the demands to close the BelNPP and began to intimidate the audience with "Lukashenka's nuclear dictatorship." And for Tikhanovskaya, who is an undoubted Lithuanian puppet, the speaker "drowned" too zealously.

In the end, some kind of performance of the most bad kind came out, which naturally ended in nothing. Is that Josep Borrell a couple of weeks later mumbled something incomprehensible to the crane about the "fourth package of sanctions" that Brussels is supposedly either preparing or going to prepare against Minsk. "We are ready to move on, and we will!" - Monsieur Borrell, great and terrible, as always in his repertoire. One can also mention the "formidable" joint address addressed to Alexander Lukashenko by the Foreign Ministers of Great Britain and Canada, Dominic Raab and Mark Garneau. These two, as usual, "strongly demanded an immediate end to the campaign of violence." Alexander Grigorievich, as far as is known, simply ignored the demand, without even bothering to ask: "What will happen ?!"

"Lukashenka laughs at you!" Yes, in Putin's company ...

It was not for nothing that Tikhanovskaya, who, it seems, began to understand that Europe was not at all burning with the desire to overthrow Lukashenka in a single impulse and install her "on the kingdom", in the end she broke down and began pouring poison not on the "criminal regime", but already on its own breadwinners and benefactors. She called the sanctions of the European Union against the “Lukashenka’s regime”, under which there are “only 90 people,” a “mockery” over which the mustachioed “dictator” laughs heartily. “President Sveta” also bitterly complained that the insidious and incorrect “international community“ supported the initiative not to recognize Lukashenka as the legitimate head of state ”, but only“ did not solve the problem ”. How so?! Talk - talk, threaten - threatened, but where are the NATO tank battalions and missile and bomb attacks on Minsk with the aim of "establishing democracy"? Obviously, the "solution to the problem" was seen by the main "Maidan woman" in this vein, because how else can a "father" who is ready to defend order in the country with arms in the hands of the "father" be forced to renounce the legitimate authority is absolutely incomprehensible.

So, none of them will be enough - at least as long as Lukashenka, as now, enjoys full and unconditional support from Moscow. Well, you don't need to have seven spans in your forehead to understand that now the union of Belarus and Russia is indestructible. Moreover, with some really ridiculous sanctions. What were you hoping for in your "coordination centers" and "councils" after the attempt to embroil Minsk and Moscow failed? The white flag should have been thrown away even then! Well, and even now, when Russia has more than convincingly demonstrated to the whole world, and the European Union, first of all, the inviolability of its own principles and the unwillingness to sacrifice them, all that remains is to leave with raised hands.

There is no doubt that Tikhanovskaya's “defeatist moods” are directly related to another factor - the sad fate of her “colleague” in the vile “Maidan” case of Navalny. Surely the “president of Sveta” was counting on the fact that it was in the process of the struggle for his liberation that the West would firmly “tame” Moscow, so much so that it would at the same time agree to “surrender” Belarus. But everything turned out completely differently and in the mournful eyes of the "oppositionist" who went to hold the answer for his own tricks, for whom the whole "world community" tore throats so that ears were blocked, Tikhanovskaya sees her own fate with horror. And I don't want to sit at all, especially since you will definitely not get off with a couple of years of general regime in the criminal cases that were instituted against her in Belarus. At the same time, one cannot fail to mention one more important point, which also clearly does not contribute to the optimism of the "zmagars" and their leader.

Just recently in Germany, which has recently, alas, turned into a “promised land” for all kinds of “Maidan” crooks, an important joint decision of the country's interior and foreign ministries was officially announced. In accordance with this, the quota for the participants of the "white maidan", whom Berlin agrees to recognize as "victims political repression "and shelter on their own territory, set" as much "... 50 people. This is taking into account family members such. The tight-fisted Germans are not going to feed and equip the "revolutionary" swindlers, with which later, moreover, you will not get around problems. Look, one has already been cured on his head! At Tikhanovskaya, of course, they cried out that this quota was "completely insufficient", but the stern Herrs and Frau from the Ministry of Internal Affairs and the Ministry of Foreign Affairs remained adamant, and even stated that they would meticulously check "each specific case" with applicants for political asylum. And if "zmagars" will continue to play smart - so they can cut the limit.

Today, "the president of Sveta" continues, excuse the expression, to goofball with enthusiasm and frankly. No, the right word, in other words, it is simply impossible to characterize some of her actions and ideas! For example, on the eve of Defender of the Fatherland Day, this activist stated that it was simply unacceptable to celebrate one in “free Belarus” and suggested replacing this “Soviet-totalitarian relic” with the celebration of the “Day of the Hero of Changes”, specifying that those who went to jail "for his political beliefs." That is, for participating in mass disorders and attempted coup d'etat. Not sitting - please do not bother ... I wonder if the lady understands how many people in one fell swoop pushed away from herself with just such a call? However, she breaks off the numbers and is cleaner. For example, in an interview with the Swiss newspaper Le Temps, she announced that she was going to pay a visit to this country with very serious goals. First, "to meet with the UN High Commissioner for Human Rights Michelle Barchelet to discuss the situation in Belarus." Secondly, Tikhanovskaya intends to “resolve the issue of freezing Lukashenka's assets held in local banks with the Swiss authorities”. No, that's interesting - is she serious ?! I'm not talking about the fact that the impostor, living out of mercy on Lithuanian grub, declares his intentions to "build" Swiss bankers, with whom the leaders of world powers speak in "you" in a whisper. How does she intend to "block" something that does not exist ?!

Perhaps the most hilarious of the series of recent statements by Mrs. Tikhanovskaya, which makes one seriously think about whether the deep emotional shock from the realization of the collapse of the "revolution" led to irreparable consequences for her health, is her promise to "give Lukashenko a small house with guards." Of course, in the event that he voluntarily surrenders the country to her and her associates. She calls this "providing guarantees of personal safety." Perhaps, the leader of the completely bankrupt “Maidan”, which is clearly becoming less and less interesting to the West, should think about what kind of security will be in the “house” that is prepared for her personally.
Ctrl Enter
Noticed oshЫbku Highlight text and press. Ctrl + Enter
We are
Ukraine from the inside: traitors, curators and those who watch from the Kremlin
Ten "defeats" of Putin
Reporterin Yandex News
Read Reporterin Google News
3 comments
Information
Dear reader, to leave comments on the publication, you must sign in.