Is Biden as scary as we imagined him? 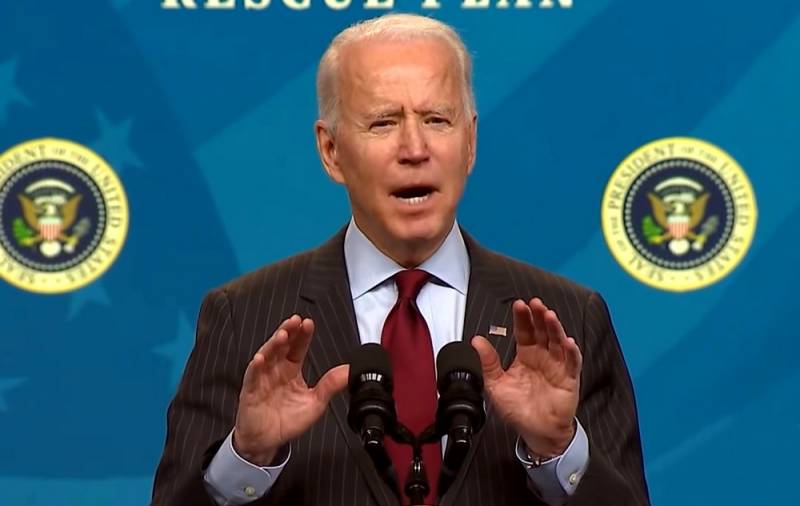 February 27 marks the 88th anniversary of the famous burning of the Reichstag, which opened the way for Hitler to usurp power and actually led to World War II. Until now, historians argue whether it was an act of a lone pyromaniac by the Dutch communist Marinus van der Lubbe, or it was a provocation of Goering's people, who took advantage of the exalted young man and actually poured (in the literal sense of the word) gasoline into the fire, pouring it over the premises of the Reichstag ... The stormtroopers of Karl Ernst (who died on the Night of the Long Knives, and for this reason could not testify) are suspected of this, his unofficial boss Hermann Goering at that time headed the Reichstag in the rank of Minister of the Interior of Prussia.


Nevertheless, the fact remains - it was this event that led to the power of Hitler's Nazis, who after that opened a hunting season for their political opponents of the communists.

Symbolically, 88 years later, we saw something similar in modern America. And it happened almost on the same day with the burning of the Reichstag in 1933 on January 6, 2021. I mean the so-called "storming" of the Capitol by Trump's supporters, after which Trump himself was outlawed, accused of incitement, depriving the last opportunity to protest the falsification of elections in the US Congress, and under the guise of this, start a witch hunt, purer than the one that was in the 50s during the rampant McCarthyism. Then the McCarthy hunted the communists, now the McCarthy heirs have opened the Trumpist hunting season. Their ultimate goal was to prevent Trump from participating in the next presidential elections in 2024, for which they tried to subject him to the second (and this is already a record!) Impeachment procedure (and the first impeachment procedure in the history of the United States of a president who had already left office!). But the main goal of the globalist democrats, who, by forgery, got to the Oval Office, was not even the figure of the Undaunted Cowboy they hated, but the elimination of their political rivals, Republicans-isolationists (Trumpists) from the real levers of power, i.e. in fact, reducing the United States to a single, at best one and a half party system of government, when even their competitors will have no chances to occupy the White House.

And they do everything for this. As soon as their protégé Biden legalizes 11 million migrants from Latin America, the picture of voters will radically change in favor of Democrats even in primordial republican states such as Texas or Louisiana (I'm not even talking about New York or California). Then the star of the Republicans will go down for a long time. Therefore, I would not be deluded by the fact that Trump's second impeachment procedure in Congress did not go through without gaining the required number of votes. Biden has more than one trump card up his sleeve.

But back in January 6, 2021. I dare to assert that this was a pre-planned action of the globalist-democrats to nullify the Trump project, both in fact and in its consequences. At that time, Trump still had a weak, but still, a chance to challenge the results of the (as he claimed) flawed US Congressional elections by submitting alternative electoral lists by Republican congressmen from the disputed states. There, in this case, political collisions arose, which gave Trump a far from zero chance of defending his right to stay for a second term, but the Democrats decided not to risk it and gave the go-ahead to storm the Capitol.

Then everything was like in a bad movie. I think that in 1917 the revolutionary sailors and soldiers stormed the Winter Palace in approximately the same way (the famous storming of the Winter Palace, which, as it turned out later, did not exist). There was a shot from the Aurora, but there was no assault as such. We just entered the palace: “Who are the temporary ones? Get down! " And that's it! The rest is a historical reconstruction flavored with Soviet ideological propaganda. So in America, surrounded by a rare chain of police officers and flimsy metal fences, the Capitol fell at the first attempt to storm it by a small unarmed crowd, consisting of some freaks, diluted with regular provocateurs from antifa and BLM. When watching numerous videos, one got the full impression that the scattering policemen, who did not make any attempts to resist the storming ones, were simply luring the suckers into a trap, where congressmen, frightened to death, were already waiting for them, in horror hiding under benches in search of gas masks and running back and forth in search of salvation ... Oil painting by an unknown artist: "Freaks storm the Capitol." Open day in the madhouse - patients have taken power and demand to continue the banquet. The unfortunate, fooled people who became participants in this performance have already become objects of prosecution, some of them are already giving testimony in courts, and some of them even went to another world under unexplained circumstances (and I’m not saying anything about 4 people shot in storming this stronghold of modern American democracy).

But the Democrats squeezed the most out of what happened, blaming Trump for everything and opening the season to hunt down his supporters. Then in the epic saga called "US Presidential Election 2020" it was possible to put an end to it. The Democrats won. Thanks to all. Everybody's Free. Carcass. Shine. Curtain.

But is everything so bad for us, who until the last believed in Trump's victory and put all our eggs in his basket?

Is Biden as scary as we imagined him?

To be honest, I myself was among those who defended our beloved Donald Undaunted to the last, and predicted the arrival of the Sleepy Joe Democratic team as a complete end for Russian-American relations. Now I have to admit that, perhaps, I was wrong. And the point is not even that Sleepy Joe, with his arrival and the unleashed campaign of persecution of Trump's supporters, actually bury America as a country of democratic and liberal freedoms, tearing it into two irreconcilable and warring camps (do not forget that 74 million people voted for Trump. ). Now even the word "democrat" itself carries a negative connotation, and for the word "liberal" you can already get in the head. Ultimately, all of this only weakens America, which plays into our hands as its existential enemy.

And not even that Sleepy Joe first of all prolonged the very same Strategic Arms Reduction Treaty, which expired on February 5, 2021, known as START III. The last treaty, from which Trump did not have time to withdraw. Moreover, I note that Biden did this without any preconditions. And not even that he can return to the nuclear deal with Iran, known as the JCPOA (Joint Comprehensive Action Plan), from which his predecessor came out in May 2018 (by the way, while Sleepy Joe is in no hurry to do something). And not even that he can restore the US membership in the DON (Open Skies Treaty), we left it after the United States at the end of last year and it is not a fact that we will return again. In fact, we do not care how all the same the US membership in the WHO (World Health Organization), disgraced with covid, and in the 2015 Paris climate agreement, which prescribes all states that signed it to reduce carbon dioxide emissions from 2020. Although we ourselves signed it, to be honest, against the background of the current cold winter with icing of Europe, Northeast Asia and the southern states of America, it is somehow hard to believe in global warming.

The main thing for us in this whole story with the replacement of the Republican team with the Democratic team is that America has become predictable. And it's not that Trump was an eccentric, unpredictable, pompous idiot who ruled as he pleases, obeying solely mood and emotions. No! He was a pragmatist, and he acted extremely rationally in the interests of America. His whole trouble was that the interests of America came into conflict with the interests of TNCs (transnational corporations), the face of which is the globalist Biden and those who stand behind him. Therefore, they went to bed to prevent Trump from realizing his tasks. And they got in the way! Although Trump has achieved a lot. Now, with their arrival, the old management style is returning. And we have already felt this in the first steps of the administration of the 46th President of America. This was especially clearly reflected in the sanctions against the SP-2, which the US Congress on January 1 of this year passed by law to the Pentagon's 2021 defense budget, having voted “for” the sanctions by both chambers, overcoming even President Trump's veto for this. How Biden cleverly bypassed this law - more on that below.

Everything that is done is for the best ... for the Russian Federation

Recently, the State Department of Joe Biden submitted to Congress a list of organizations against which sanctions may be imposed on Nord Stream 2. Not a single European company got into it, and of the Russian ones there were only the pipe-laying vessel "Fortuna" and its owner, the company KBT-Rus.

Simply put, the current sanctions are completely inadequate. The intentions of Congress are clear and cannot be ignored: ... stop the completion of the malicious construction of the Russian Nord Stream 2 gas pipeline. The application of sanctions only against the Russian pipe-laying vessel Fortuna and its owner KVT-RUS, on which the previous administration had already imposed sanctions, does not correspond to this intention. Completion of the construction of this pipeline would be nothing more than a victory for Vladimir Putin.
For those who have forgotten, I will remind you that this is the same senator who was nicknamed Moscow Mitch a couple of years ago, when the Russian agent Trump was president and the Democrats were in opposition, for his love for the Russian Federation. From which one can draw the obvious but paradoxical conclusion that Russophobia in American politics is not a purposeful policy of the White House, but only serves as an instrument of internal political struggle. For a long time, the United States has not seen Russia as an enemy that threatens American domination, with which it is necessary to purposefully fight as a priority. Under Trump, the Kremlin's agents were Republicans. Under Biden, Democrats will take their place. As they say, nothing personal - the law of conservation of energy. The water cycle in nature.

The lull in US-Russian relations seems to be ending. We pass to the active phase. Well, thank God! Any certainty is better than any uncertainty.
Reporterin Yandex News
Reporterin Yandex Zen
2 comments
Information
Dear reader, to leave comments on the publication, you must sign in.