A sacrifice on the altar of democracy: why the West deliberately "drowns" Navalny 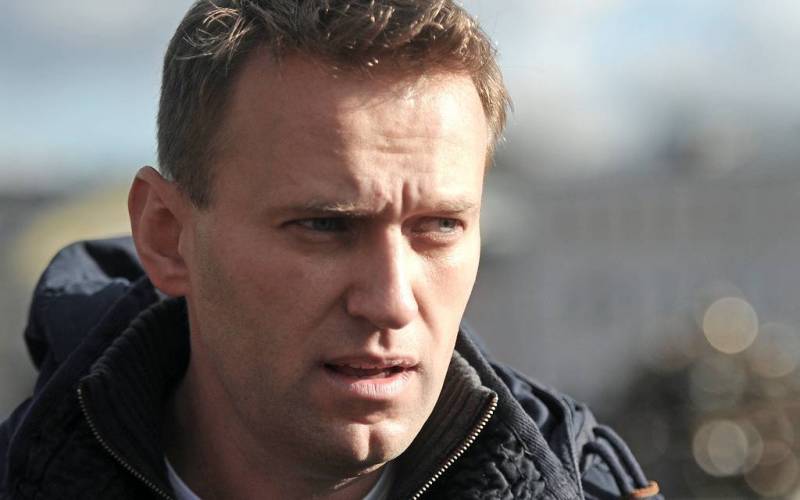 The story with Alexei Navalny with each new "round" is more and more shifting from the detective genre originally set by its directors into the field of tragicomedy and even, rather, outright farce. Honestly, somehow the desperate attempts of the "formidable" West to rescue from the dungeon a very well-fed "oppositionist" who are completely smashed against the steel steadfastness of Moscow is difficult to characterize. Laughter, and only ...


At the same time, all the demarches of the "defenders of democracy" lead, in fact, only to the fact that the prison doors are slamming behind the "saved" more and more tightly. How else? After all, the situation has long gone beyond the framework of the criminal cases considered in the courts and has acquired the character of an open confrontation between Russia and the West, in which our country cannot “back out” in any way.

Most likely, it is this phrase from the immortal “The meeting place cannot be changed” and will determine the existence of the “beacon” of our unforgettable “democracy” in the coming years. Well, what can you do ?! He called himself a "fighter against the regime" and began to play tricks, spawning an incredible amount of dirt around him - climb, as they say, into the back. Avtozaka ... Navalny's recent speeches in the courtroom eloquently demonstrate that this individual, who undertakes to "make Russia free and happy," does not at all understand which country he is in. "The giant of thought", in one speech, manages to quote the Bible, Harry Potter and Hollywood cartoons - this, you know, something. Something beyond the limits of even that perfect surrealism, into which the domestic liberal "get-together" has long turned into, periodically giving birth to such "pearls" that at least stand still, at least fall. He could, however, at least apologize to the veteran! Or, at least, not to make absolutely ugly attempts to "joke" him again.

Mr. Navalny behaves exactly the way only a person can behave who has finally realized that his business is "tobacco", the rate is a beat and there is no chance left. So it is incomprehensible that he sculpts - some wild set of random quotes and eschewed slogans about "a fair division of the gas and oil pie" and "salaries like in the EU", while probably cursing the Europe that has pushed him into the current maelstrom. After all, what is really happening? Turning Navalny into a symbol “political persecution in Russia "and extremely brazenly demanding his release" immediately and without any conditions ", the West puts the Kremlin in a situation where it is absolutely impossible to retreat, to give up the slack. In any other case, you see, a compromise would have been found, a kind of "Solomon's decision", merciful and flexible. But here we are not talking about a compromise - only about surrender. And Russia will not agree to it. Not now and not in this case ...

The list of our underrevolutionary's "saddens" is so extensive that it cannot be quoted in its entirety due to lack of space. On January 18, in Berlin, German Foreign Minister Heiko Maas demanded to release him from the gloomy prison. Literally three days later, during the next briefing, the Chancellor of the country Angela Merkel urged to do the same, "immediately and very urgently". EU High Representative for Foreign Affairs and Security Policy Josep Borrell tried to achieve the same while in Moscow in person. Who else is there? Amnesty International, President of the European Council Charles Michel, Joe Biden's national security adviser Jake Sullivan, and his patron himself, the new head of the White House to boot ... Honestly, it would be a good chorus to gather all this fraternity at once. , turned out, very much amicably and deduced in tune.

The culmination of all was the ultimatum demand of the European Court of Human Rights: “in accordance with Rule 39 of the Rules of Court, to release the applicant”. It is they, let me clarify once again, they give such an instruction to our country - they do not ask, they do not even call, but they poke their pointing Europerst in our face and imposingly like this: "Shnel!" Running, in the sense, they rushed to perform on cyrly! The ECtHR ultimatum states that the order must be executed "immediately", given the "nature and degree of risk to life" of the precious "opposition" organism. Please note - everything is formalized in the most categorical, categorical form, which can hardly be called anything other than offensive - unless, of course, we are talking about an independent state, and not about a miserable colony. Do you think that the same ECHR does not understand and realize this? Well, after all, it's not fools who sit there! In fact, the situation is deliberately reduced to the fact that following the instructions of the West would be as humiliating as possible for our country. What for?!

An attempt to scare Russia, take no ...

It must be said that the demarche of the domestic Ministry of Justice that followed this demarche can with good reason be considered a standard example of restraint and correctness. In response to the incredible impudence, the head of this department, Konstantin Chuichenko, quite rightly characterized the European attempt to "run over" Russia as "gross and obvious interference in the affairs of a sovereign state," specifically in the activities of its judicial system. Since the ECtHR judgment does not contain a single legally supported argument in favor of "pardoning" Navalny (facts or references to certain legal norms, based on which one could speak of release), then, according to Mr. Chuichenko, he should be considered " unlawful and unreasonable. " And besides, as Russia's chief lawyer quite rightly reminded, following the absurd demands of the judges of the Cordoba would violate its Constitution, in accordance with the latest amendments to which the legislation of our country is more important than any "international norms." In Russian laws, it is impossible to find any grounds for the release of citizen Navalny from criminal liability.

It is for all these reasons that the head of the Ministry of Justice called the decision of the ECHR "impracticable in principle." Exactly the same opinion was voiced by the Deputy Speaker of the State Duma Pyotr Tolstoy, who believes that the amendments to the Basic Law were just adopted in order to deprive various European "leaders" of the opportunity to influence Russia with the help of such demarches, which have clearly "politicized" background. Some of the “fighters for democratic values”, both in Europe and in our country, are horrified: “But how is that ?! After all, this will be the first time in history when the highest order of the ECHR, based on the 39th article of its precious regulations, will not be fulfilled! "

So so be it. Russia, pardon the pun, is not the first time to be the first to put in place too presumptuous European "civilizers" who are trying to teach everyone to live around them. I remember all sorts of people came to visit us ... However, Europe was shrinking, obviously shrinking. Having suffered a fair amount of shame in Moscow, Josep Borel at the yesterday's summit of EU foreign ministers, which, according to numerous announcements, was supposed to turn into an ecumenical court of justice over Russia, went broke over the fact that our country "took the path of confrontation with Europe." It, you see, "is turning into an authoritarian state" and "refuses to respect its international obligations." Have mercy, gentlemen! And you, for an hour, do not confuse anything ?! Did we catch your citizen and caulk him in jail? And, by the way, when did Moscow undertake to leave various scoundrels and boors unpunished solely on the grounds that, you see, they declared themselves “politicians”? All these, however, are purely rhetorical questions that do not imply answers from opponents. Much more interesting is something else - and what, in fact, are the gentlemen from Brussels ready to respond to the "blatant", as they consider, Moscow's disobedience? Let's leave "out of brackets" the delicate point that the ECHR is actually not an official body of the European Union, its structural subdivision.

But since they have begun to threaten ... Will you again be expelled from the Council of Europe? So you, after all, for the money that Russia pays there as membership fees, sorry for being rude, are ready to strangle yourself. This will not happen. Ah, will you invent new sanctions ?! Apparently, this is exactly how it will be. At least, according to the rather scant information about the "historical summit" chaired by Borrell, the EU intends to "harshly call to account" the head of the Investigative Committee of Russia Alexander Bastrykin, Commander of the Russian Guard Viktor Zolotov, Prosecutor General of the country Igor Krasnov and the head of the Federal Penitentiary Service Alexander Kalashnikov ...

Personal sanctions will be introduced against them, that's what! It is very interesting, how do you imagine the reaction of the above respected people to these very sanctions in Brussels? Probably, they think that gentlemen generals will begin to fix pistols to their temples - from "indelible shame" and a terrifying resentment. No, the right word, the purest comedy! Monsieur Borrell, who, in fact, at the end of the meeting with his colleagues and announced the "political coordination of personal measures against those guilty of imprisoning Navalny," honestly admitted that contrary to the dreams and desperate requests of our "beacon of democracy" there will be no sanctions against Russian business! "There are no grounds ..." I would say honestly - it will be more expensive for itself. By the way, the Russian Foreign Ministry has already reacted to this demarche. The decision of the main diplomats of the EU countries was described there as "unlawful, unilateral" and "made under a far-fetched pretext." And ... Yes, here's another thing - they won't release Navalny, no matter what sanctions are imposed. There are no grounds.

But surely seeing off from Berlin, our "oppositionist" was admonished with the most cheerful forecasts. Well, they definitely promised that he would spend a few hours on the bunk, at most days. And there he flies to freedom in the halo of a martyr and "winner of the system", straight into the open arms of enthusiastic crowds of fans and followers. We can say - five minutes before the president of Russia. Well, at least a deputy of the State Duma. In fact, everything turned out like that ... Now the West is trying to squeeze at least something out of Navalny. By exposing our country to knowingly impossible ultimatums, and thereby making liberation completely impossible, he “spins” his image in the only currently available “victim of authoritarianism”. Only this "sacrifice" Western politicians themselves coolly attached to the "altar" so beloved by them in words "democracy". What can you do - if you sit down to throw a bank with professional cheaters, and even their own marked deck through and through, then this is how everything will end, and inevitably. There will be science for new “gambling lovers”, in case they decide to play the same games as Navalny, trying to put their own Motherland on the line.
Reporterin Yandex News
Reporterin Yandex Zen
11 comments
Information
Dear reader, to leave comments on the publication, you must sign in.