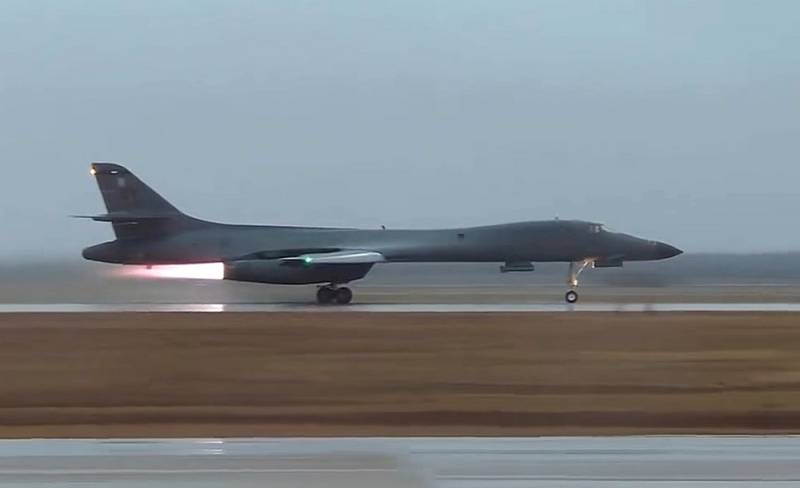 The US Army is parting with another batch of B1-B Lancer strategic bombers. At one time they were considered almost the top technical thoughts, and ultimately turned into an overwhelming burden. On the one hand, the process of replacing military equipment, especially in the field of military aviation, is completely normal and even necessary for any armed forces.


On the other hand, the problems with the US Air Force fleet are more and more clearly going beyond the current moment and take on a systemic character, indicating possible failures in the field of global strategic planning of their development paths.

Such a definition would be the best fit for the B-1B Lancer bomber. As a matter of fact, this brainchild of the American corporation Rockwell International owed its birth ... to the accuracy of Soviet missilemen from the Air Defense Forces, who in 1960 brilliantly hit the U-2 diving over the Urals under the control of the unforgettable Francis Powers. It was then that the Pentagon learned that hiding from the Russians in the sky-high heights was ineffective and decided to radically change tactics. In the process of a future attack on the USSR, for which the United States was then preparing in the most active way, instead of bombarding the heads of its inhabitants from extremely high heights, they decided to do this, literally sneaking up to the points of attack at extremely low altitudes. For some time, supporters of the "high-altitude" direction, who opposed this idea, were rushing with the idea of ​​replacing the "oldies" B-52 with the XB-70 Valkyrie supersonic strategic bomber, which, according to them, should have rushed in the sky at a speed of Mach 3. However, later it turned out that the potential of this machine was greatly exaggerated, and the cost was underestimated, and the project was closed. President John F. Kennedy personally chose B-1.

As a matter of fact, its developers had to reorient themselves to creating a machine for a low-altitude breakthrough of air defense directly in the process of not even designing, but starting the production of the machine. Because of this, the B-1 aircraft marked "A", produced in only 4 pieces and known to all of us B-1B, the fleet of which at one time numbered a hundred copies, are essentially completely different. The speed was reduced by almost half, they added "stealth" to the dear American warriors, "did something else" - and, in general, it turned out to be a pretty good bomber.

Words about the pinnacle of technical thought are not a joke at all. B-1B at one time owned more than six dozen records set for aircraft of its class in the field of speed, flight range, carrying capacity and other issues. This machine was created, as already mentioned, as a winged killer for the Soviet people - well, there could be no other targets for the 34 tons of thermonuclear bombs B61 and B83 hiding in its three compartments. Almost three dozen more tons of nuclear death could be added on the external sling ... Nevertheless, after the Soviet Union was destroyed not by a missile and bomb strike, but by treason and treason, the need for such weapons seemed to have disappeared. B-1B hastily began to re-equip for new purposes. "Lancers" quite, alas, successfully pirated in the skies of Yugoslavia, Iraq, Libya, Afghanistan. At the same time, it was revealed, to put it mildly, not too much reliability of these machines - flight accidents happened to them with frightening regularity. Since the adoption of the B-1B into service in 1984 and until the end of the twentieth century, 10 bombers died in accidents, which carried 17 pilots to the next world.

Disasters continued and subsequently - especially often "Lancers" burned, but it happened, they just crashed into concrete fences while taxiing on the runway. Production of the B-1B was stopped back in 1988, and by now only a little more than half of the once produced such machines remained in the hangars of the US Air Force. 33 of them were retired back in 2003. This year, this number will also be reduced by 17 units subject to unconditional write-off. On February 18, the first of this batch of "condemned" bombers went to scrap metal. What to do? Their content "flies" the Pentagon at such a "pretty penny" that the local financiers grab their heads.

How are planes seen off?

According to Air Force Global Strike Command, General Tim Ray, keeping the winged "oldies" alive over the next two decades would cost $ 10 million per plane. However, some sources say the amount is three times more - 1 million. According to Mr. Ray, the decommissioning of part of the B-30B "will free up the necessary resources and allow the technical personnel to keep the rest of the machines in combat readiness." Yes, it’s bad if for the sake of saving some planes you have to "put under the knife" others. At the same time, only 1 of the named number will be sent for conservation - the rest will be scrapped in the literal sense of the word. However, the general is trying to cheer up and argue that in this way the US Air Force "makes room for its own future" - strategic bombers of the next generation B-4 Raider, which, as they plan in the Pentagon, will eventually replace all "strategists" in US military aviation ...

I remember that something similar has already been said about the B-2 Spirit, from which the military is now dreaming of getting rid of almost more than from the B-1B Lancer, since its content alone in hangars with specially created temperature and humidity parameters devours completely insane money ... In addition, as events in the skies of Serbia showed, this "super invisible" was vulnerable even to critically outdated Soviet-made air defense systems. In the end, the "Spirit" went down in history not as the most effective, but as the most expensive military aircraft, and the B-52 Stratofortress is still the basis of the strategic bomber aviation of the US Air Force. with the Egyptian pyramids.

According to preliminary estimates of many military experts, the B-21 Raider, which, as stated, should become a "creative continuation" of all the ideas and developments embodied in the B-2 Spirit concept, risks becoming its "continuation" in the main - absolutely prohibitive high cost. And the talk that he will be the "S-400 killer" for some reason causes only skeptical grins in our military. One way or another, but the development of military aviation in the United States, according to some analysts, at a certain stage decisively turned on the wrong path. By equating the concepts of "the most expensive" and "the best" aircraft, the local military made a big mistake. This applies not only to strategic bomber aviation. According to US Air Force Chief of Staff Charles Brown, the issue of replacing the existing F-16 Fighting Falcon fighters with more modern machines is very urgent at the moment. But this problem should have been solved several years ago - the developers from Lockheed Martin at one time, beating themselves in the chest, swore that "the most modern 5th generation fighter" F-35A Lightning II will allow the American Air Force to get rid of the "flying junk" at the latest by 2025. Then the F-16 were supposed to "retire".

However, the further, the more suspicion that all the declared boundaries and horizons are nothing more than boast. As a result, in 2018, the Pentagon was forced to extend the service life of the Falcons until 2050. If we consider that this machine was developed and began to enter the troops in the 70s of the last century, then there seems to be nowhere to pull further. However, despite the fact that hundreds of F-35 units have been produced, the decision on its mass production specifically for the needs of the US Air Force is still not being made - the "final and decisive" tests are postponed over and over again and the end of this delay is not visible. The next "shift to the right", and for an indefinite period, was announced by the official representatives of the US military department quite recently.

According to Charles Brown, from October 1 next year, his department intends to launch a special program, within the framework of which military pilots want to get an answer to the question of what the optimal composition of the tactical aviation fleet should be. In the process of its implementation (2022-2023), in particular, a worthy replacement for the F-16 must be selected. Obviously, the Pentagon is tired of waiting for Lockheed Martin to eliminate all the countless shortcomings of the "most modern" and intend to rely on a completely different machine. At the same time, according to the available information, in no case will it be about the next "miracle of technology" of the 5th generation. I mean something more realistic economical and close to the daily needs of the Air Force. The main problem in this case is that not even the development of a new aircraft, but talks about it, in fact, are being conducted when its operation should have been going on with might and main. And who will undertake such a responsible task? Most likely, all the same "geniuses" from Lockheed Martin or Boeing, who know how to count anything, just not the customer's money ... In the end, it turned out that the United States, which for many years allowed itself far from good-naturedly to make fun of "bastard" Russia , allegedly lagging behind them in military-technical development, faced an extremely unpleasant prospect of staying with an air force consisting either of reliable, but extremely outdated combat vehicles, or of capricious, whimsical and immensely expensive "toys" imposed on them by their own military-industrial corporations.

Another proof of this statement can be considered the information received from the United States just the other day - on February 19 in Alabama, a two-seater military supersonic jet Northrop T-38 Talon, performing a training flight, crashed. Both the American instructor and the cadet, in the role of which a pilot from the Japanese Self-Defense Forces, were killed. It should be noted that these machines have been used as training machines since 1961 and have already developed all conceivable and inconceivable resources. Recently, the number of accidents with them has increased to two dozen. And what are these, if not obvious symptoms of a systemic crisis of the air force of a country claiming world domination?
Reporterin Yandex News
Reporterin Yandex Zen
9 comments
Information
Dear reader, to leave comments on the publication, you must sign in.