"Russia is to blame for everything!" How long will Moscow tolerate a lie from Kiev 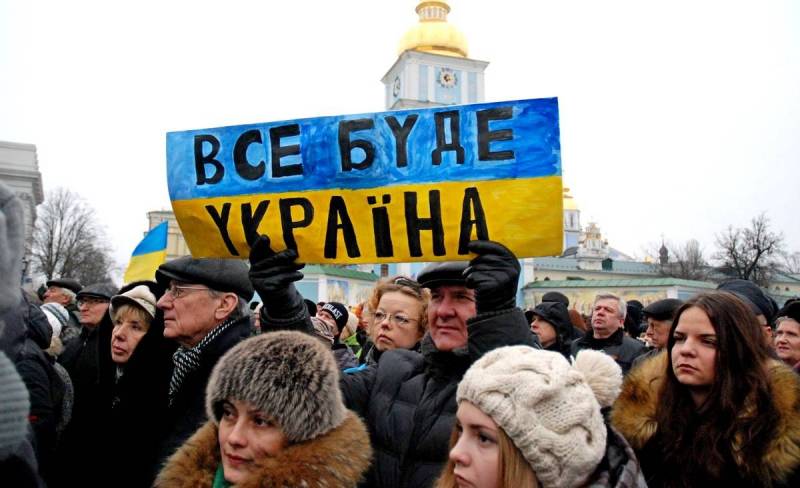 On the eve of the next anniversary of the coup d'état, which has received the hypocritical name of the "revolution of dignity" in Ukraine, the local parliament adopted a special resolution dedicated to these bloody and tragic events. In fact, this is the official position of Kiev, expressed at the state level, and from now on, according to the authors of this document and the deputies who voted for it, it is not subject to appeal and revision.


What is the significance of this resolution, which should not at all be perceived solely as a "duty" internal political chatter? For the most "non-profit" it is a real verdict and a path to further, already final degradation and loss of the remnants of statehood. For our country, the parliamentary decision also has a definite meaning. This is another moment from which, perhaps, a radical revision of all relations between Moscow and Kiev should have begun.

And the lie lasts longer than a century ...

To tell the truth, it cannot be argued that some sensational statements were made in the resolution, which we will be talking about, or that something fundamentally new was recorded. All the same set of "Maidan" lies, in which black is called white, criminals and heroes are reversed, and in general the whole interpretation of the situation is, as they say, turned upside down. However, there are also some particularly outstanding "pearls". It turns out that the last legitimate president of Ukraine, Viktor Yanukovych, "usurped power in 2010-2014." How can the results of the presidential elections pass for "usurpation", about the conduct and final results of which even the most picky international organizations and representatives of the "world democratic community" did not express the slightest complaints?

It is impossible to explain this from the standpoint of logic and reason. As well as the next "discovery" contained in the decree - that it was this very "usurpation" that led to "violation of human rights and freedoms" and "undermining the security and defense of the country." Not an armed coup, not the intervention of foreign states in a civil conflict - this is just that. I will not argue - the claims to Yanukovych about "security and defense" are really justified. However, they consist in the fact that, having come to power after the "orange period", when the country's law enforcement bodies were packed with agents and henchmen of the West, he, as the head of state, did not bother to carry out a cruel "purge" both in the Security Service and in the armed forces of Ukraine. As a result, the "eagles" from the first slammed a coup d'etat that was twisting under their very noses, and the army generals cowardly avoided suppressing it. What was, what was.

The only organized force that opposed the putschists, from the first to the last day of confronting them, was the militia, today liquidated as a structure in the “nezalezhnoy”. She is just given "special attention" in the resolution of the Verkhovna Rada. The activities of the “militiamen, soldiers of the special forces“ Berkut ”, servicemen of the Internal Troops of the Ministry of Internal Affairs,” who fully performed the oath and their official duties, are called “illegal” (which absolutely contradicts not only the truth, but all legal canons), and, moreover, inflicted irreparable harm to society and the state ”. True, in the same context, judges and prosecutors, as well as "other officials and officials" are mentioned, but the main "stranglers of the Maidan" are, of course, they are filthy cops ...

Of course, no one thought to mention the fact that dozens of police officers and military personnel of the Internal Troops were killed by “peaceful demonstrators” in the course of the riots, and about a thousand of them were injured. Indeed, in this case, we would have to admit the fact that two dozen law enforcement officers were shot and about two hundred were wounded by gunshot just in the period from 18 to 20 February 2014, when they were trying to restrain the frenzied onslaught of supposedly “peaceful demonstrators”. And from here - half a step before remembering how the day before in Lviv an organized pogrom of military units and regional police departments was carried out, after which about one and a half thousand "guns" were transferred from there to the Kiev "Maidan" under the leadership of Yuriy Lutsenko, who later became General the prosecutor. This is not to mention the fact that according to the data of independent investigations, most of the "heroes" almost canonized in the "nezalezhnoy" "Heavenly Hundred" were not killed in any "Maidan". Almost half died in psychiatric hospitals, in drug treatment clinics ...

"Russia is to blame for everything!" Let's go again ?!

A long time ago, the confessions of the true killers who fired on February 20 both at the police and at the "Maidanists" specially brought by their leaders to the slaughter were announced to the whole world. The confessions of both Georgian snipers operating in Kiev under the leadership of American "specialists" from the Pentagon, and of the scum from Galicia, who are proud of the murders of police officers, are carefully documented and replicated by the world media. Why, there are whole documentaries made about them. However, the Ukrainian parliamentarians continue to bend their own way: “only the policemen and Yanukovych are to blame for the deaths of people”. The ex-president is also accused of "Russia occupying Ukrainian territories". This happened, according to the authors of the decree, due to the fact that "the criminal regime that ruled the country until February 2014, acted to please Russia, contrary to Ukrainian national interests."

Here in this very place for Moscow, at least in the person of the department of Sergey Lavrov and the State Duma, it's time to hit the table hard and bark: "Enough!" To tell the truth, the absence of not only a clear and intelligible, but in general any official reaction to such an obvious and insolent Russophobic demarche is not that surprising, but somehow even discouraging. It turns out to be a strange thing - to “build” emissaries from Brussels and even too many leaders of Western countries who allow themselves to be boys, the same Mr. Lavrov succeeds perfectly, but to short-circuit the presumptuous “legislators” of the country under the control of a clown - no. And after all, ignoring this fact, "keeping proud patience" is also somehow not out of hand - the resolution was nevertheless adopted not at a meeting of the club of Alcoholics Anonymous or even at the political council of any of the semi-marginal nationalist "parties", but most, that neither is the main legislative body of the country.

Russia has already made mistakes, recognizing over and over again the "elections" in Ukraine, each of which does not have the slightest legitimacy, since it was held after a coup d'état, inspired from abroad, and with the participation of the very persons who carried it out. First, they recognized Poroshenko, smeared with blood on his ears, communicated with him at various "summits" ... Now here is exactly the same story with Zelensky, in which, you know, someone dreamed of "Poroshenko's alternative" with his dense Russophobia and complete controllability from Washington. Well, how do you like the "alternative"? Especially after the Rada's resolution, in which it is written in black and white that the "Maidan coup" is nothing more than "an expression of the Ukrainian national idea of ​​freedom and a key moment of Ukrainian state building."

When in the Kremlin at least someone comes to the simple fact that it makes no sense in Kiev to communicate and generally have at least any dealings with any government, except for the one that openly and publicly recognizes the "Maidan" as what it was on really. That is - a state crime and the greatest tragedy of the country. Exactly until this happens, there is no one to talk to, there is nothing and there is no need. "Maidan" was carried out in the name of Russophobia and in its name. As long as Ukraine, as a state, does not renounce this vileness, does not repent for it and for everything that has been done after it, it will remain an openly hostile state for Russia. And ignoring such specific manifestations of hostility, such as the current parliamentary resolution, will encourage those in power to take increasingly cheeky and aggressive steps. You shouldn't allow yourself to spit in your face so openly ...

What is most interesting is that the text of the document I quoted above has been in the Verkhovna Rada for over a year. As a matter of fact, it was planned to adopt it back in 2020. However, then they were careful not to do this. Nowadays the majority of the deputies of the parliament voted “for” amicably and in a disciplined manner. Traditionally, the "opposition" squeaked something, which did not give its votes - but that was all. Its representatives are capable of demonstrating their own "disagreement" only and exclusively in the most safe ways for themselves. The rest of the time they perfectly coexist and cooperate with those colleagues for whom the "Maidan" is a heroic achievement, and Russia is the "aggressor country". Zelensky was finally reborn as Poroshenko - and what can you do about it? Obviously, Moscow intends to wait for new stages of transformation without doing anything. And in vain.

Not so long ago, one of the deputy heads of the Ukrainian Foreign Ministry said in all seriousness that "intensive negotiations are underway" on a substantial strengthening of military cooperation between Kiev and Tokyo. Up to, as he argues, "the creation of a military alliance to resist the aggressive actions of Russia, directed against the territorial integrity of both states." It is he, the bastard, hinting that the Ukrainians and the Japanese have a "common misfortune", putting the Crimea and the Kuriles on a par ... No, quite recently, the Americans donated as many as 70 inflatable rubber boats to the "nonsealezhny" "for defense needs" ... You can, of course, try to seize some of the islands with their help. The Japanese with their kamikaze tradition will surely appreciate it.

And if we put aside the jokes, then the head of the same diplomatic department of Ukraine Dmitry Kuleba is talking about creating a completely different military alliance - with Georgia and Moldova. Under US patronage, of course. Very much, he says, "we are actively moving in this direction." And now this is not at all funny. Intoxicated and poisoned by the "Maidan" Ukraine will seek allies, partners, associates, accomplices - anyone who is fit to bring our country as much trouble as possible together. And this will continue as long as Russia allows it.
Ctrl Enter
Noticed oshЫbku Highlight text and press. Ctrl + Enter
We are
"We must beat first": the geopolitical alignment around Russia is continuously deteriorating
Ten "defeats" of Putin
Reporterin Yandex News
Read Reporterin Google News
32 comments
Information
Dear reader, to leave comments on the publication, you must sign in.