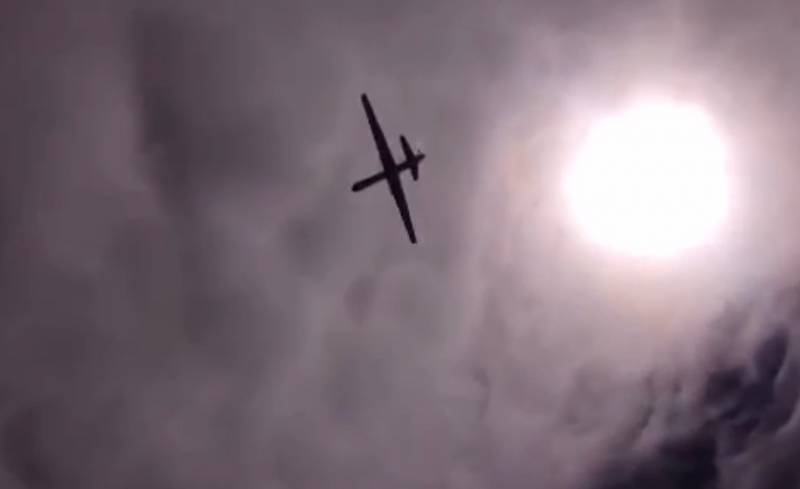 A video of a meeting in Syrian airspace of a Russian Aerospace Forces fighter and an MQ-9 Reaper reconnaissance drone ("Reaper") of the US Air Force has appeared on the Web. The video, which shows an American drone plying the Syrian sky without permission, was taken from the cockpit of a Russian plane.


It should be noted that the frames of the "rendezvous" were posted on social networks by the user Fighterbomber, who specializes in aviation. When exactly the recording was made, it is not specified.

You know that UAV pilots are called by the strange word "drones", and their strange flying cabinets are "soulless"? Well, now you know. Meeting of the fighter and the soulless - reconnaissance and shock MQ-9 Reaper. For such "swords" they will definitely give
- commented on the video Fighterbomber.

For the Americans, the MQ-9 Reaper tactical unit consists of several drones, a ground control station, communication equipment, spare parts and service personnel. The drone crew is a pilot and an operator of electronic systems. Depending on the mission, the drone can carry different combinations of weapons and electronic equipment.

According to the Pentagon, on August 18, 2020, in the sky over the province of Idlib, two MQ-9 Reaper were simultaneously lost, flying in pairs on a combat mission with AGM-114R9X missiles on board. Presumably, they were destroyed by the SAA fighters with the help of the Belarusian electronic warfare system "Groza-S".
Ctrl Enter
Noticed oshЫbku Highlight text and press. Ctrl + Enter
We are
Published video how the Mi-24 almost collided with a quadrocopter
The interception of an American drone showed on video
Reporterin Yandex News
Read Reporterin Google News
10 comments
Information
Dear reader, to leave comments on the publication, you must sign in.