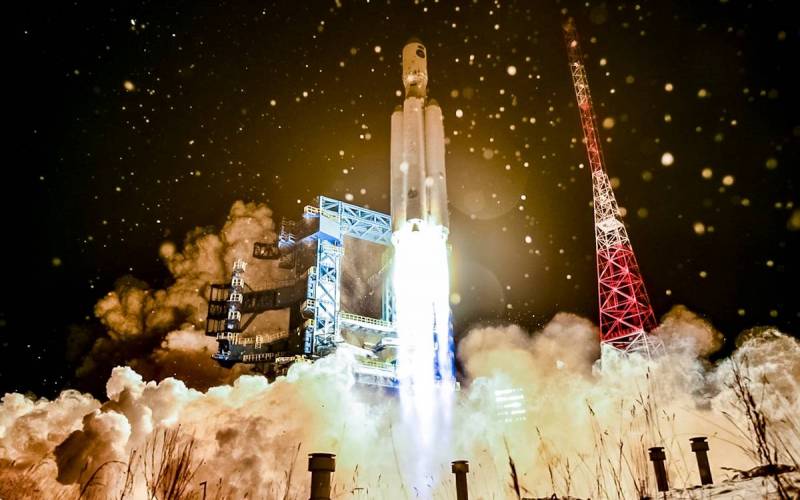 RSC Energia is considering the possibility of sending the first cosmonauts to our natural satellite by means of four launches of the Angara-A5V heavy rocket. Reported by the agency TASS, citing a source in RKO.


According to the interlocutor of the publication, the rocket and space corporation is already working on a scheme for sending a manned mission to the moon using a series of four launches of a heavy carrier.

After the launch into orbit, the manned spacecraft will dock with the ISS, where the cosmonauts will wait until both KBTK and LVPK are delivered to LEO. Then the "Eagle" and the lunar takeoff and landing complex will dock with the booster blocks, which will give impetus to spacecraft for a flight into an elliptical orbit and separate from the latter.

Upon reaching a circumlunar orbit with an altitude of 200 km, the manned spacecraft will dock with the LVPK. After boarding the complex, the cosmonauts will land on the surface of our natural satellite, carry out all the necessary work and go back to the spacecraft on the takeoff module. After boarding the Eagle and separating the take-off module, the crew of the lunar mission will go back to Earth.

Last week we wrote that the creation of the super-heavy Yenisei stopped... Initially, this particular rocket was to be used in lunar missions. However, at the end of last year, the Council of the Russian Academy of Sciences and Dmitry Rogozin recommended at the first stages to use the Angara-A5V launch vehicle for flights to our natural satellite.
Ctrl Enter
Noticed oshЫbku Highlight text and press. Ctrl + Enter
We are
Again “Angara”: why is Russia another heavy missile?
The moon does not shine: Why did the USSR lose to the American Apollo
Reporterin Yandex News
Read Reporterin Google News
4 comments
Information
Dear reader, to leave comments on the publication, you must sign in.