Russophobia as a way to go broke: the Baltic states cost Europe more and more 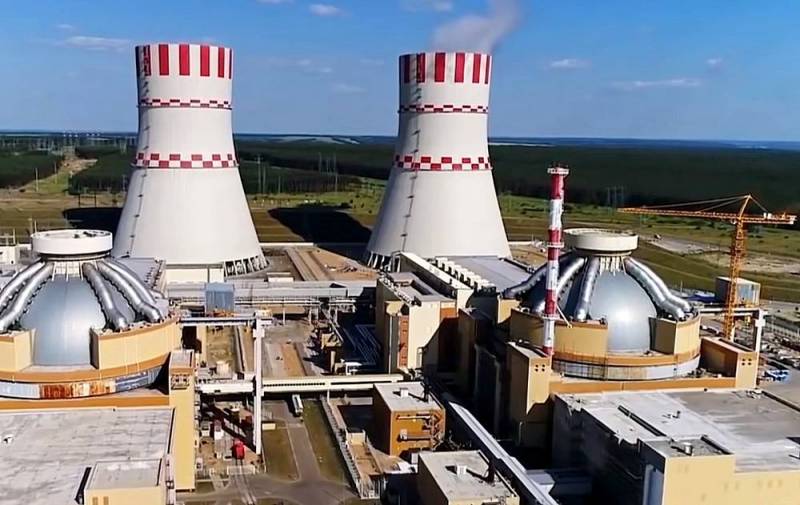 Recently, the European Parliament adopted another "historic" document - an extremely negative resolution on the Ostrovets NPP. And even though this object is located on the territory of Belarus, this should not mislead us. The decision of the European parliamentarians is dictated not only by their rejection of the “criminal regime of Lukashenka”, but also, first of all, by selective Russophobic motives in the most “classical form”.


Tellingly, the initiators of both the consideration of this issue in the European Parliament and giving it the most politicized sound were the representatives of Lithuania, who are actively supported by the other Baltic countries. This is a typical example of how the European Union follows the lead of, to put it mildly, not the most significant of its members, thus promoting their own interests. The problem is that the EU has to pay for the implementation of the absurd Baltic whims, both literally and figuratively. And this fee becomes more and more over time.

Russophobia as a way to go broke

At one time, both in the period preceding the collapse of the Soviet Union and immediately after this event, the "collective West", including the countries that are now part of the European Union, made a lot of efforts to ensure that not just the former Baltic republics from the “post-Soviet space” conditionally formed on the ruins of the USSR, but also to oppose them to Russia as much as possible. The inhabitants of Lithuania, Latvia, Estonia were hammered into their heads with myths about their "exclusiveness", "Europeanness" and brilliant prospects that await the Baltic States and its population in the "happy European family", where they return, decisively breaking with the "damned soviet past." These dwarf countries were supposed to become a "showcase" that clearly demonstrates the correctness of just such a vector of development, bringing "dramatic changes for the better" caused by "decommunization" and, to be honest, by taking an openly anti-Russian position.

For the sake of the fastest "European transformation" of the Baltic states, the most aggressive nationalist cadres were pushed to power there, who readily carried out policies of these countries in the key that the West needed and carrying out all the commands that came from there without the slightest hesitation about the possible consequences. At the same time, Riga, Vilnius and Tallinn were indeed creating a “maximum favored nation regime” for their entry into both the EU and NATO, which, in fact, was the dream of the local “political elites” and the population deceived by propaganda. A belated insight among the inhabitants of these countries came later - when the "partners" began to implement the next stage of their plan. In Latvia, Estonia, Lithuania, a rapid de-industrialization began, the complete collapse of all any significant components of national economies.

Industry was followed by agriculture, followed by the destruction of the unnecessary infrastructure ... Nevertheless, in this segment of "European integration" everything was more or less acceptable for the Balts - the EU did not skimp on generous subsidies and compensations for the same farmers, but its countries, having opened their borders, accepted hundreds of thousands of labor migrants from the region. The problems began later - when it turned out that she completely ruined the local economics Europe does not at all intend to support the Baltics forever on tranches and subsidies from its own pocket. In this case, we have a very subtle and peculiar collision: the European Union was confident that, despite all their Russophobic rhetoric, Latvia, Estonia and Lithuania would not completely destroy economic ties with our country. They will continue to use their transit opportunities, conduct trade, and so on.

For Europeans, this is a completely common practice - the same Germany can reproach Moscow with “violation of human rights” or “annexation of Crimea” as much as she likes, accept our “oppositionists”, but continue to build Nord Stream 2 and take care of increasing exports to Russia ... With the Baltics, everything turned out in strict accordance with the saying about an alternatively gifted person, who was forced to pray to God ... Her countries, especially in recent years, have managed, especially in recent years, to spoil relations with our country so much that economic cooperation with it has been reduced to almost zero ... Moreover, literally in 2019-2020, they (especially Lithuania) quarreled with another important economic partner - Belarus, which inevitably promises new losses. Perhaps someone else in a similar situation would have thought hard about changing his own behavior, but not the Balts. Apparently, they firmly intend to continue to act in exactly the same spirit, and they are going to force to pay for their own political "elections" ... The European Union!

"Break out of the ring" and the road to nowhere

Let's consider this thesis using two specific examples. To begin with, let's return to the BelNPP topic. At present, the power systems of Latvia, Lithuania and Estonia are part of the so-called BRELL Electric Ring, which also unites the networks of Russia and Belarus. It would seem that such a replenishment of its capacity as the NPP “Ostrovets” being put into operation should be welcomed by all the project participants. But no. At the aforementioned meeting of the European Parliament, it was the deputy from Lithuania, Andrius Kubilius, who flirted about the BelNPP as a "Kremlin geopolitical project" designed to "chain the Baltic to the old Soviet energy system" and make it "a puppet in the hands of Russia." Some of his colleagues, in particular, the representative of Germany, generally agreed that “Ostrovets” is “Lukashenka’s weapon, which he intends to threaten both his people and the inhabitants of Lithuania,” but this is, excuse me, psychiatry.

The practical meaning of the Russophobic - anti-Belarusian demarches of Kubilius and others like him is in the desire to "break out of the ring" of BRELL, by sucking ... sorry - by connecting to the energy system of Europe. And all would be fine, but neither Vilnius, nor Riga, nor Tallinn, nor all of them together have the money necessary for such a large-scale "turn to the West". "Electric Europeanization" is supposed to come at the expense of Brussels. As a matter of fact, with his money, it has already been carried out little by little - since 2017, when the Balts decided to withdraw from BRELL. The first tranche "to cover infrastructure costs" of more than 300 million euros was allocated by Brussels in the same year. However, at present, according to the assessment of the European Commissioner for Energy Kadri Simson, investments of at least another billion euros are needed. But electricity for the Baltics needs to be generated somewhere else! At the moment, Europe (the same Germany and France) is actively phasing out its own nuclear energy, declaring its intentions to switch to renewable energy sources. But will the watts generated by wind turbines and tides be enough for new "freeloaders"?

According to the available information, wholly supporting in words the aspiration of Vilnius, Tallinn and Riga to "increase the energy security of Europe" by withdrawing from BRELL, Brussels is perplexed: what do these Balts want ?! Finland is cited as an example, which (for nothing that has never been a former republic of the USSR) imports Russian electricity without any problems. Because it is reliable and profitable. And these are twisting their nose ... How the situation will be resolved at the current stage is completely incomprehensible. Vilnius has repeatedly stated that they will not accept a single watt produced at Ostrovets. However, whether the power engineers of the country, which is part of the unified system, will meticulously establish the origin of the electricity supplied to them from the BRELL in each specific case, or whether they simply intend to leave it, despite the fact that according to the plan approved by Brussels, this should happen no earlier than 2025 is absolutely unclear ...

It is quite possible that the same Vilnius, whose emissaries today in the European Parliament are demanding “to show European solidarity” in “getting rid of the Belarusian monster”, tomorrow they will go with a knife to the throats of European officials, demanding to immediately finance this “rescue”. They will become - after all, the representatives of the Baltic countries staged a completely ugly attempt to blackmail the entire European Union when it came to approving a budget plan for allocating funds to overcome the consequences of the coronavirus pandemic. "Either give money for Rail Baltica, or we will block your budget to Kuzminuskas's mother!" - set the condition "the leaders of the Baltic powers" in a letter that they, like the Cossacks from the famous picture, wrote to Antonio Costi, Prime Minister of Portugal, presiding over the Council of Europe.

A terrible offense in Latvia, Lithuania and Estonia was caused by the fact that the promised by Brussels 1.4 billion euros "for the completion of the construction of the main cross-border railways between the EU countries to unite them and support the functioning of the single market", as it turned out, were not intended for them at all! Or rather, not to them on an uncontested basis. The Balts, begging for this money for a long time and tediously, almost felt pleasantly rustling bills in their hands, when suddenly ... The whole thing was ruined by the European Parliament, whose deputies declared that such funds should be "allocated on a competitive basis" and not go to those who whine the most plaintive of all. They are quite understandable, because experts in the field of economics have long come to the conclusion that Rail Baltica is, in fact, a road to nowhere. It certainly has serious military significance for NATO as a highway for the transfer of troops to the borders of Russia and Belarus. However, this project has no economic prospects from the word “absolutely”. Well, this railway will not pay off even in a hundred years. The only thing that can give it real meaning and even make it a profitable investment is the hypothetical restoration of economic and trade ties with Russia by the Baltic states. Then, filled with our and Belarusian transit, this path will at least pay for itself.

However, Brussels is well aware that such a scenario belongs more to the realm of fantasy, and not economic forecasts. So they are in no hurry to fork out, because it is considered wrong to "bury" common money in a deliberately failed project even in the name of "European solidarity", especially in the current crisis conditions. In fact, Europe has fallen into a trap that it has prepared for itself - having turned the Baltics into its own outpost against our country, it is now forced to maintain economically insolvent countries, the only "product" of which is Russophobia.
Reporterin Yandex News
Reporterin Yandex Zen
11 comments
Information
Dear reader, to leave comments on the publication, you must sign in.