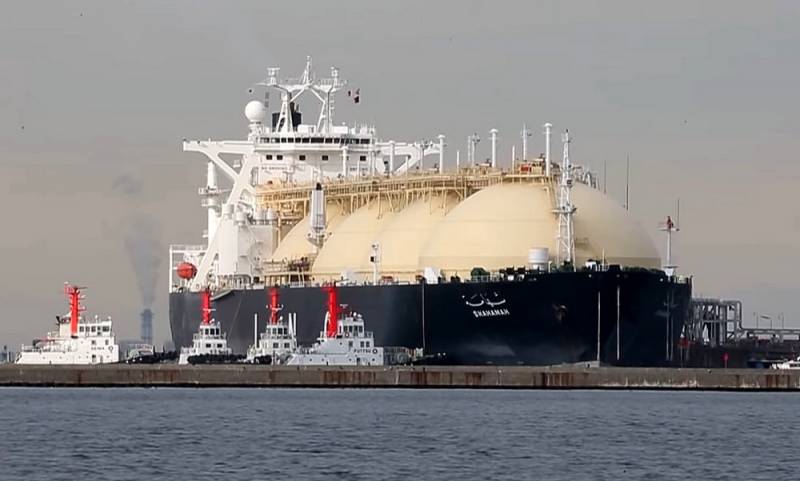 Penultimate I ended my text with the following passage:

The next two articles will be devoted to debunking the next myths that have developed over the past 7 years. The first will debunk the myth about the possibilities of the Americans to transfer the EU to their own LNG and explain why they have not done so yet. The second will focus on Biden's plans to decarbonize the world economics and will remove the myth about the maintenance of Ukraine at the expense of the Russian Federation by transit of Russian hydrocarbons through its GTS.

I keep my promise. About SP-2 and Biden's Cunning Plan to Decarbonize the World Economy I already toldIt remains to highlight the problems of American LNG and finally clarify the interest of the Americans in the issue of maintaining Ukraine at the expense of the Russian Federation by pumping Russian gas through its GTS to Europe.

To begin with, there is no American LNG in nature. There is LNG produced on the American continent, specifically in the United States, by private American companies, to which the US state has nothing to do, except that they are located on its territory. They regularly pay taxes at the place of their registration, they do not owe anything else to the US state. Neither Trump, let alone Biden, is a decree to them. To tell them to whom they should sell their LNG, and to whom not, neither the President of the United States, much less a bipod of a smaller caliber - cannot, from the word "absolutely". With all their desire.

Because in the US LNG industry there is such a thing as tolling. Vertically integrated projects based on the production of gas, its liquefaction with the subsequent transportation of LNG to the consumer, certified by long-term oil-related contracts, take place, but only outside the United States. Under Trump, a tolling scheme took root in the LNG industry to break even and compete with pipeline gas. This scheme allows the processor to reduce all his commercial risks to zero. The only element of risk here is the need to buy gas on the exchange. But after the signing of the first long-term contracts for the sale of its products, the processing enterprise becomes break-even. All risks are passed on to the buyer, and the contract itself is used to secure a loan, without which even a barbecue house cannot be opened in America, let alone build a gas liquefaction plant.

Tricks of the tolling scheme

It must be understood that the United States until 2015 was only a net importer of LNG for its own needs (it became a net exporter only under Trump). Therefore, antimonopoly legislation has developed there, which nullifies the possibility of a monopolist emerging on the American market, capable of single-handedly dictating gas prices. As a result, all gas sellers can only sell gas on the national gas exchange Henry Hub. Therefore, in the United States, the gas producer, the owner of the liquefaction plant and the LNG exporter are different firms, and the latter are mainly non-American companies. Most (63%) of them are "portfolio buyers" such as Shell, British Petroleum, Total, which have a large pool of buyers around the world and send American LNG to regions with the most attractive prices at that time (there were cases when LNG carriers deployed right on the way). The scheme is simple - an LNG processing plant buys gas from local shale gas producers, liquefies it, and then sells it to buyers (Shell, Natural Gas Fenosa, and other companies) on FOB (free on board) terms of delivery under which the Seller loses rights on the goods as soon as the goods have crossed the ship's rail at the port of shipment, from that moment all costs and risks of loss or damage to the goods are borne by the Buyer. After that, the seller does not care about the fate of the goods (LNG), he cannot influence the place of its shipment. Neither he, let alone the President of the United States.

There is also an alternative scheme, when the refiner provides its facilities to future exporters of liquefied natural gas, who independently purchase gas from American production companies or participate in gas upstream projects (KOGAS, Mitsubishi, Mitsui). These are mainly Asian companies, compared to the previous group purchasing LNG on FOB terms, there are not so many of them, only 12% of the total number of contracts (88% falls on FOB). Moreover, all steps of a potential buyer are regulated. To purchase LNG produced in the United States, you need to sign a contract with the processor for liquefaction of gas and pay an advance payment for the lease of equipment. Considering that we are talking about billions of cubic meters of gas, advance payments amount to millions of dollars. And this amount is non-refundable. Then on the Henry Hub exchange you need to purchase the required amount of gas and pay for its delivery to the plant. After gas liquefaction, either its storage in the plant's tanks is paid for, or it is loaded onto a tanker.

At the same time, all exporters of LNG produced in the USA, in their contracts have a “liquefy-or-pay” clause, according to which the Buyer pays a fee for liquefaction regardless of whether he uses the capacity or not. Thus, the processor eliminates the risks associated with incomplete loading of his plant. For example, from June 1, 2017, KOGAS has to pay annually to Cheniere (the largest US owner of an LNG plant, which accounts for 20% of the US liquefaction capacity), $ 61 million annually for 547,5 years for the reserved capacity 3- th technological line, which will be a serious incentive for Koreans to use these capacities and sell all the contracted gas to minimize costs. As a result, all the problems with the sale of American LNG in foreign markets are a headache for such exporters. The buyers are large traders and companies that have their own gas distribution networks (we are talking about countries such as Japan, South Korea, India, China, where there is a high demand for gas and there are no alternative sources of supply). Trump, who came up with this whole scheme, was, of course, a handsome man, it is a pity that Biden, who replaced him, did not support him in this, and ruins the established mechanism to the root, to spite Trump, to our delight.

The only thing that interests us in this scheme is that LNG purchased in the USA, unlike, for example, purchased in Qatar, has no restrictions on delivery locations. But a processor, such as Cheniere Energy, will be able to supply it to the EU countries only when it settles with creditors and fulfills all previously signed contracts, i.e. not earlier than 15 years later (Biden will definitely not live to see it!).

Problems of LNG supplies to Europe

And I am not saying anything yet, that the capacities of these producers are not sufficient to replace the supplies of Russian pipeline gas, and I am not even mentioning the insufficient quantity and capacities of the European receiving regasification LNG terminals for this. At the same time, Qatar is the main supplier of LNG to the EU, Australia is in second place, and only in third place, with a noticeable lag behind the Australians, is liquefied natural gas from the United States. There are currently 2 receiving regasification terminals in the EU, including Turkey (and excluding the UK, which is no longer a member of the EU, with its 3 LNG terminals). By 4, there will be 27 of them (another one will be reopened in Spain). Their total receiving capacity will reach 2025 billion cubic meters of gas. The figure is, in principle, not small, even if we compare it with the supply of Russian pipeline gas to the European and Turkish markets, which in 28 fell to 236 billion cubic meters of gas, against 2020 billion cubic meters in 175. At the same time, in 199, the Russian Federation lost 2019% of its share of the European market (from 2020% to 3%), yielding them to foreign LNG suppliers.

But all these achievements of the enemy LNG will not help it replace Russian pipe gas not even because of the higher cost price, but because of logistical problems. The Atlantic is a very harsh ocean, the passage of an LNG tanker from the United States takes at least 3 weeks, provided the weather is good. Qatar in this sense is in a more advantageous position - it passed through Suez and you are already in Europe. But the receiving European terminals are located extremely unevenly along the coast. One each in Belgium (12 billion cubic meters) and the Netherlands (16 billion), Greece (7 billion), Portugal (7,6 billion), Poland (7,5 billion) and Lithuania (4 billion) ... Two in Turkey (with a total capacity of 12,2 billion cubic meters). Four in France (42,9 billion). Seven in Italy (51,75 billion) and nine in Spain (75,1 billion). The numbers in brackets are given with a perspective for 2025, the Europeans plan to increase the receiving capacity of their LNG terminals, following the precepts of Uncle Sam, despite the fact that at the moment they are all working with partial load (40-50%).

But are they right? As this harsh winter has shown, neither Uncle Sam, nor any other uncles and aunts rushed, breaking chairs, to the aid of freezing Europe (have you heard that the temperature there dropped to unprecedented lows - minus 8 ° C in Germany and about zero in thermophilic Spain and France). Instead, mercenary Americans, along with other market participants, began to tarry the market of freezing Northeast Asia, where, together with temperatures down to minus 18 ° C (in Beijing and Tokyo), LNG prices jumped 7 times to their 6-year highs, breaking through the 1 thousand USD / thousand cubes. For comparison, the price of gas on European swaps during this time rose to just over $ 330. And even the price of $ 700 per thousand cubic meters in Spain did not attract LNG suppliers, who were storming the Asian markets at that time. As the saying goes, nothing personal - it's just business.

It was high time to remember about Putin, and he froze, not increasing supplies by an iota, according to the agreed contracts, forcing the Europeans to massively empty the reserves of UGS (underground gas storage facilities), where the same Russian gas was stored, pumped there in the summer by summer prices (in anticipation of problems with the signing of a transit agreement between Russia and Ukraine), owned by Gazprom. The decrease in reserves while maintaining the same supply volumes predictably pushed the prices for blue fuel up, to the delight of Moscow, but did not allow Ukraine to enrich itself on the increased transit, to the chagrin of Kiev, since Gazprom did not increase transit. But it can always increase if necessary, which cannot be said about gas carriers that still have to cross the Atlantic, God forbid there is a storm, and I am not saying anything yet, about the cost of gas and the limited number of gas carriers. From which one can draw a simple conclusion that the possibilities of the United States to crush the European gas market are very illusory.
Reporterin Yandex News
Reporterin Yandex Zen
35 comments
Information
Dear reader, to leave comments on the publication, you must sign in.