PMC "Wagner": to be or not to be in Russia for the private armies of oligarchs 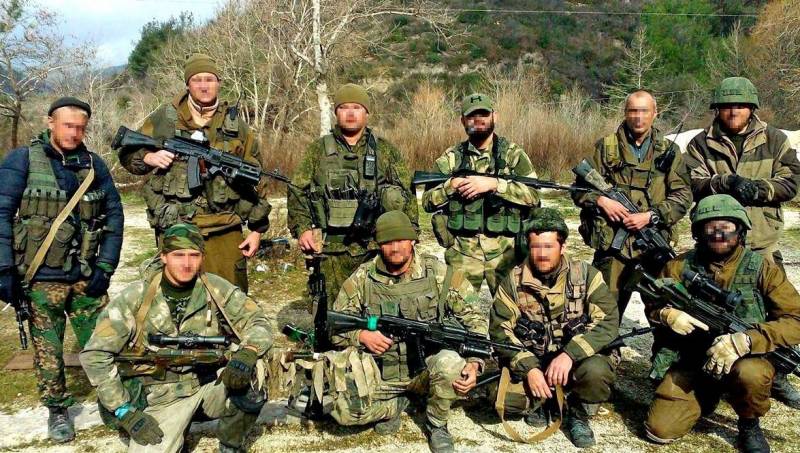 In a Syrian city, in the province of Deir ez-Zor on the wall of a building appeared a certain inscription in Arabic calling for the return of the so-called PMC "Wagner", without which the locals are allegedly unable to cope with the terrorists who are raising their heads again. What is this: a real request from the Syrians for help, a simple self-promotion, or the birth of a myth about "noble Russian knights without chevrons"? Let's try to figure it out.


First of all, it is necessary to point out that there is no official Wagner PMC in Russia, just as there is no law on private military companies. But there is the Criminal Code of the Russian Federation, which provides for serious criminal liability for mercenarism. Despite this, the "Wagnerites" are active in many "burning spots" of the planet, their unofficial leader Dmitry Utkin is not on the run, but, on the contrary, visited the Kremlin on Heroes of the Fatherland Day, where he took pictures with President Vladimir Putin. How can all this add up to a single picture?

Not much is known about Wagner, a significant part of the information comes from foreign sources and is unverified, which please take into account when reading it. It is generally accepted that this, legally non-existent PMC operates abroad where it is not from the hands of the RF Ministry of Defense itself. According to The Bell, the activities of the "Wagnerites" are informally supervised by the Main Directorate of the General Staff of the Russian Federation, but its fighters are not included in any lists of law enforcement agencies, so the state is not responsible for them. According to the information available in open sources, the PMC has already been noted in the Donbass, Syria, Libya, CAR, Sudan, Mozambique, and even became the reason for the recent international scandal with Belarus. A natural question arises, why the actually existing paramilitary structure has not yet been legalized, if its activities are recognized as useful at the highest level? PMCs are quite legal business in many countries of the world, including the United States. If the Americans can, why can't the Russians? What's the problem?

The answer may not be entirely straightforward. In 2018, answering this direct question, President Putin for some reason confused the long-permitted private security activities (numerous private security companies) and private military companies, which were proposed to be legalized. He then stated:

If this Wagner group violates something, then the Prosecutor General's Office must give a legal assessment ... Now, about their presence somewhere abroad. If, I repeat again, they do not violate Russian law, they have the right to work and push their business interests anywhere in the world.
Strictly speaking, they violate a lot of things:

At firstwithout being officially registered and registered with the tax authorities, they do not pay taxes. According to the Fontanka newspaper, one Wagnerian gets from 160 to 240 thousand rubles a month. Conflict Intelligence Team (CIT) gives similar figures: for participation in hostilities - from 150 to 200 thousand per month, for major battles - up to 300 thousand. Judging by open sources, this dangerous work is paid for both military and private lines. Private refers to the well-known Russian oligarch Yevgeny Prigozhin, who is considered the main beneficiary of this PMC (which has not been proven and denied by the businessman himself). If (we emphasize, if) this is indeed the case, then we are talking about illegal entrepreneurial activity due to the lack of the necessary state registration.

Secondly, the activities of the fighters of this PMC fall under the criminal article on mercenarism, which can turn against them themselves if they change political conjuncture.

Thirdly, “Wagnerians”, concluding a contract under the “gray” or “black” scheme, are extremely risky. After all, they are not sent on vacation to warm seas, but to "hot spots". If all goes well, they will earn decent money and bring money home. And if not? After all, they can not only be killed, but also maimed, while they will not have any rights to social security as veterans of military operations, they are not entitled to any disability pensions.

And the most important thing is that, as such, the interests of the state do not really smell here. It has long been noticed that Wagner PMC is present mainly where there are business interests of large Russian capital. For example, in Syria, mercenaries, including Russians, Ukrainians, Serbs, Moldovans, and Belarusians, first actively participated in the liberation of Palmyra from terrorists in 2016 and 2017. But then, according to the Fontanka newspaper, funding from the RF Ministry of Defense was reduced, and the Wagnerites were transferred to free bread. Allegedly, a certain agreement was reached, according to which the PMC will be able to "feed" in Syria at the expense of the oil fields taken from the enemy, taking for itself a fourth of the extracted raw materials. Interest in the development of "black gold" in the SAR was shown by the company "Euro Polis", which RBC considers to be affiliated with the billionaire Yevgeny Prigozhin. And in February 2018, there was a memorable defeat of the US Air Force "Wagnerians" while trying to take control of refineries and oil fields in the province of Deir ez-Zor.

Also, the "Wagnerians" were seen in South Sudan, where, according to The Bell, the companies of businessman Yevgeny Prigozhin "M Invest" and "Meroe Gold" entered into a concession agreement for gold mining. The M-Finance company, according to the Nastoye Vremya TV channel, which is related to Prigozhin, paid for the services of military instructors in the CAR, known for its rich natural resources and uranium reserves. On the island of Madagascar, the Wagnerians guard the chrome mines. They also fight on the side of Field Marshal Khalifa Haftar in Libya, famous for its high-quality oil, and won a contract to work in Mozambique.

Most of the information about the activities of PMCs comes from Western sources, so you need to treat it with restraint. However, as they say, there is no smoke without fire. The bottom line is that a big businessman has his own small private army, and this cannot be correct. So far, their interests seem to coincide with those of the state, but what if they stop? What if major political changes take place in our country, and the president's inner circle changes? Recall that the very first reports about this PMC began to appear in late 2014 and early 2015, when “purges” took place among the free commanders of the local militia on the territory of the DPR and LPR. We add to this that, according to the publication URA.ru, people with a criminal past, attracted by high salaries and the opportunity to shoot, have actively drawn into the ranks of mercenaries, who are imposing their "thieves" orders there:

Imagine, a man served 15 years in the zone, all in tattoos, and he is appointed a company commander!
In conclusion, I would like to say that the only reasonable way out of the situation is the legalization of private military companies in Russia. We need a law "On PMCs", which will completely regulate the activities of these paramilitary structures, establish mutual rights and obligations, the responsibility of the employer and mercenaries, and determine government agencies that must monitor their implementation. Let Wagner and his followers become normal specialized business structures and pay taxes as they should, and the country can sleep peacefully, knowing that they will not be allowed to turn into something else.
Ctrl Enter
Noticed oshЫbku Highlight text and press. Ctrl + Enter
We are
Who actually won the Cold War and what the future holds for the world
Ten "defeats" of Putin
Reporterin Yandex News
Read Reporterin Google News
Ad
We are open to cooperation with authors in the news and analytical departments. A prerequisite is the ability to quickly analyze the text and check the facts, to write concisely and interestingly on political and economic topics. We offer flexible working hours and regular payments. Please send your responses with examples of work to [email protected]
19 comments
Information
Dear reader, to leave comments on the publication, you must sign in.