What the Baltic states are ready for to preserve Russian transit 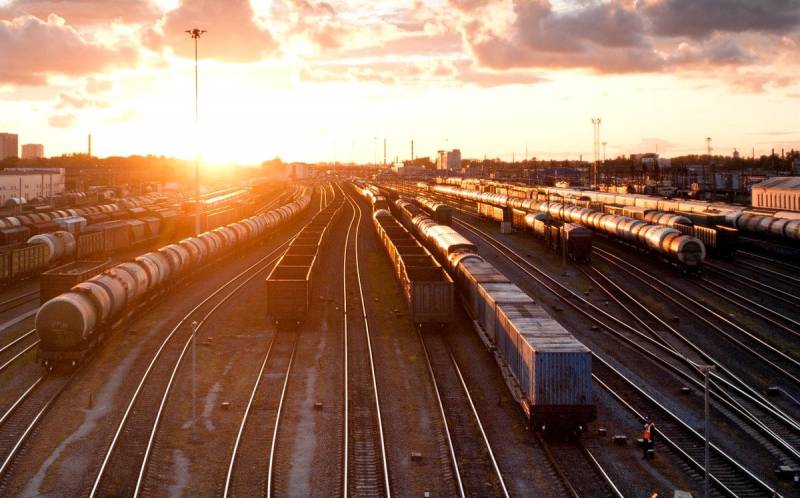 Having let the industry inherited from the USSR for scrap metal and at the same time ditching its fishing and agricultural industries, the Baltic States will soon finally lose their last trump card in the form of transit gates to the West for Russia and Belarus. Now a small but proud Estonia has entered the fight with Lithuania and Latvia for the cargo flows flowing to the East.


According to the Estonian Railways (Eesti Raudtee), the passenger traffic in 2020 decreased by one third, which can still be explained by the coronavirus restrictions, but the carrier also lost 13% of its container cargo. In Tallinn, the alarm is sounding, demanding to find new transit countries. The head of the railway company was replaced ahead of schedule. It is reported that the new one, Kaido Zimmermann, is required to "restore the reputation of Eesti Raudtee outside the country", "to attract international cargo flows", for which the top manager will need "knowledge of Russian business culture."

All in all, there is a “new thinking” in Tallinn. It is clear that such changes in the minds of the Estonian elite do not come from a good life. The problem with all three Baltic republics is that the West has not been able to provide them with an adequate alternative to economic cooperation with the East, to which they are tied historically and geographically.

Thus, the new transport corridor called Rail Baltica, which is so relied upon in Riga, Vilnius and Tallinn, simply cannot replace Russian and Belarusian transit. The railway is still under construction, but in Brussels money is already "squeezed" on it, forcing the Balts to bravely threaten European officials with blocking a single fund for compensation for damage. Even when it is completed, there is nowhere to get enough for economic payback of Rail Baltica for freight traffic. This is purely military project, which provides for the replacement of the gauge from the Russian standard to the European so that NATO has the ability to train by rail without the need to "change shoes" to quickly transfer its combat machinery and military units to the East, to our borders. On it, then, if something happens, the destroyed tanks will be taken back to the West for repairs and wounded soldiers for treatment.

For the same reason, the prospects for another infrastructure project, to which Estonia wants to join, are not too bright. We are talking about a possible underwater tunnel between Helsinki and Tallinn, which could connect the Baltic States to Finland with a single rail network. To build it, you will first need to build an artificial island in the Gulf of Finland, and the length of the underwater part of the tunnel varies from 50 to 70 kilometers. It will have to have two parts, passenger and cargo, the speed will be only 20-30 minutes. It is planned to place wind turbines on the island to provide the entire system with “green” electricity.

Sounds pretty, but there are serious problems. The term for the implementation of such an infrastructure project is estimated at 5-7 years, and the cost - in the amount of 9 to 13 billion euros. This is a lot, a lot, especially when you consider that even in Estonia itself there are justified doubts about the possibility of loading the tunnel for its payback. Whether the EU is ready to pay for this project is a big question. Tallinn tried to look for Chinese investors and even found someone, but it is not a fact that everything will "grow together" exactly the way it would like. Beijing does make large-scale investments all over the world, but it does so only on "its" terms, which are more like voluntary bondage.

As a result, the Baltic states have no other real options other than Russia and Belarus. Thus, the aforementioned new head of Eesti Raudtee Zimmerman directly proposed to restore partnership with our country. And Estonia itself volunteered at its own expense to electrify the section of the Russian railway from Kingisepp to the border Ivangorod. Can you imagine that? Tallinn intends to completely switch its railway infrastructure to electricity in order to reduce costs and, at the same time, harmful emissions. Estonians themselves are ready to pay for electrification from the Russian side, in order to open communication between St. Petersburg and Tallinn in the future. That's what they've been driven to.
Ctrl Enter
Noticed oshЫbku Highlight text and press. Ctrl + Enter
We are
Peace enforcement operation. Russia inflicts a preemptive strike on Kiev
Three years left: Ukraine will be sold in parts
Reporterin Yandex News
Read Reporterin Google News
38 comments
Information
Dear reader, to leave comments on the publication, you must sign in.