"Accomplice in crime": what is the meaning of Nebenzi's harsh words about the West 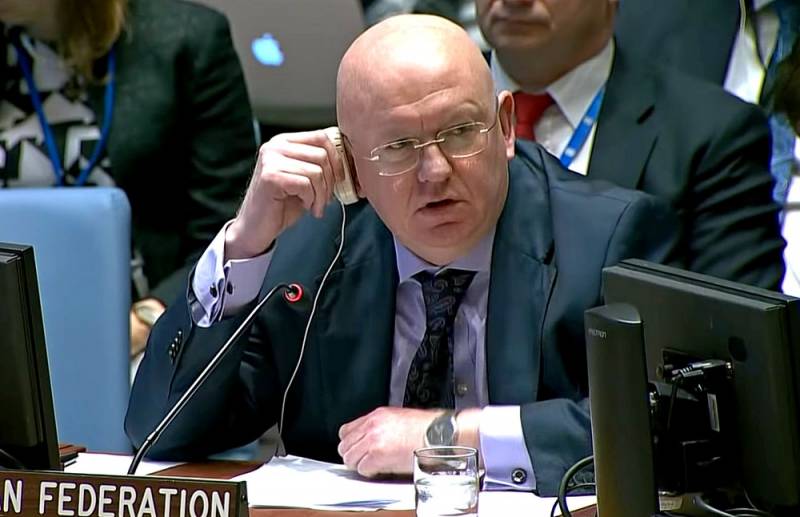 The United Nations Security Council yesterday held a special meeting dedicated to the sixth anniversary of the approval of the Minsk Agreements. Tellingly, Russia initiated this event. Neither Ukraine nor, moreover, the West, which fully supports it on all issues and aspects related to the conflict in Donbass, did not consider this date a reason for a principled conversation.


However, if anyone showed frankness in the course of the conversation that took place, then perhaps Vasily Nebenzya, representing our country at the UN. This time, he told his opponents those things that had not been said aloud before. And this bears witness to a lot. What exactly? Let's try to figure it out.

Not intermediaries, but accomplices

I must say that initially, the communication, which took place, in accordance with the current pandemic realities in a virtual version, was half-bad, but kept in a more or less constructive manner. So, Rosemary DiCarlo, who is the UN Deputy Secretary General for Political and Peacebuilding Issues, complained in her speech that in connection with the quarantine restrictions associated with the COVID-19 pandemic, the line of demarcation between Ukraine and the republics of Donbass, in fact, was tightly closed ... According to DiCarlo, this complicates the delivery of humanitarian aid and creates many problems for the residents of the region, in connection with which she urged "everyone who can influence the situation" to help to remove restrictions on movement as much as possible.

Heidi Grau, the OSCE Chairmanship's Special Representative for Ukraine and the Contact Group, was more specific and, accordingly, pessimistic. She stated a number of negative moments, which do not in any way indicate that the situation is even moving a hair towards the implementation of "Minsk". These are the closed checkpoints, the actual suspension of the exchange of prisoners and detainees, and the slowing down of the demining that is so necessary for Donbass. In conclusion, Ms. Grau expressed her extreme concern over the increasingly frequent cases of ceasefire violations and stated, in principle, an obvious thing: "without progress on the political front and in contact groups, the ceasefire achieved with such difficulty will not last long." We must pay tribute to the representatives of the OSCE and the UN - they at least tried to maintain objectivity in covering the issues discussed, did not hang labels and did not throw out groundless accusations.

A completely different style of "communication" was demonstrated by the representatives of those states that, entering the "Normandy format", must show at least the semblance of neutrality with respect to all parties to the conflict, in the resolution of which they have undertaken to participate. And not try to openly and shamelessly "push through" just one point of view, moreover, very far from reality and truth. A very unpleasant impression was made by the speech of the representative of Germany, who said that our country, it turns out, “violated the Budapest Memorandum, by signing which it expressed its commitment to the sovereignty of Ukraine”. And then she took it, and "invaded Crimea and Donbass, presenting it as an uprising." What have you presented? Where have you invaded? Further performance of the bearer of the "gloomy Teutonic genius" suggests that he has the most complete mess in his head, and he "studied" the question from the publications of the most odious media outlets "nezalezhnoy". In his passionate speech, this Herr lumped together Girkin, MN-17, “Russia's trampling on international law in Syria and Libya”, “Skripal poisoning” and God knows what else. In addition, he began to demand that our country "immediately stop the massive issuance of Russian passports to residents of Donbass," claiming that this, again, "contradicts" something. Well, this is obviously something deeply personal. Perhaps a shell-shocked grandfather on the Eastern Front ...

However, the permanent representative of another member of the "Norman Quartet" - France, to the UN, Francois Delatre, in his rhetoric was perhaps a little more restrained. "Russia is responsible for this conflict ..." But with what joy ?! In conclusion, Monsieur Delatre proudly proclaimed that Paris and Berlin will work until ... no, in no case before the onset of peace in the Donbass. And until then, "until the Ukrainian sovereignty is fully restored." After that, is it worth it to be surprised at the extremely harsh words that subsequently sounded from the lips of the national permanent representative to the United Nations?

"Ukraine has occupied Ukraine and is at war with itself ..."

It's hard to say what was the last straw that overflowed the cup of Vasily Nebenzi's patience. Either the attacks mentioned above, or even more arrogant and cynical demarches of the representatives of the United States and Great Britain, who began to accuse Russia of "the death of 12 thousand people", "annexation", "aggression", "occupation of Donbass." It all ended with the traditional threats to "bring to justice" our country and the imposing promises of "toughening and expanding sanctions." How did Mr. Nebenzya respond to all this flurry of notorious and selective Russophobia? First of all, he finally called a spade a spade. “Those who openly support only one side in the ongoing conflict in Donbass and, moreover, indulge its painful fantasies about the“ Russian aggression ”in no way have the right to call themselves mediators in the settlement of this conflict,” he said. "You, gentlemen, are none other than accomplices in all those crimes that Kiev is committing against the population of Donbass!" - such a bitter and complete truth has not sounded within the walls of the UN for a long time.

He did not forget to reproach Western diplomats for the fact that they are ready to sit down at the negotiating table with any "opposition" and "freedom fighters" from the Middle East or Latin America, but they categorically refuse to admit representatives of the DPR and LPR to the negotiating table at which their fate must be decided. In fact, our representative made it clear to the West with his bright demarche: Moscow is tired of pretending that they do not understand the real meaning of the “one-sided game” being played in the “Minsk” and “Normandy” formats. They no longer intend for the sake of some "higher foreign policy interests" to diligently adhere to the perverted "rules of the game" imposed by the West 6 years ago. And we will not continue to endure the incessant vilification of our country, ascribing to it all conceivable and inconceivable sins, too. Are you going to "bring to responsibility"? Is there enough strength?

In relation to Ukraine, Nebenzya was truly ruthless. Even before the speech of the local representative - the ex-president of the country Leonid Kravchuk (the very one who very recently ardently advocated the conduct of the Armed Forces of Ukraine in the Donbas "return fire" despite the ceasefire), our diplomat in a rather caustic manner "announced" some details of the future speech. “Now, instead of constructive moments, hackneyed mantras about“ Russia's guilt ”will start to sound again. How he looked into the water! The speech of the political "veteran" from the "nezalezhnoy" traditionally boiled down, mainly, to a set of duty Russophobic clichés and "horror stories" like talks about "Moscow's transformation into its major outposts of Crimea and Donbass." Well, Crimea is actually our territory. We turn into what we want. As for Donbass ...

Nebenzya, like a champion boxer who faced an opponent who thought too much of himself in the ring, showered Kravchuk with "blows" that were absolutely impossible to parry. Direct, specific and unambiguous questions were used: Has Kiev carried out the promised constitutional reform? Has an amnesty mechanism been developed for the parties to the conflict? What about the legislation on the special status of Donbass? And, by the way, how is the "introduction of the" Steinmeier formula "already announced by Ukraine a hundred thousand times alive there? "Finishing off" the opponent already to the point of a complete knockout, our diplomat mentally asked: how can the official representative of the "nezalezhnoy" comment on the fact that the "road map for Donbass" presented (by the way, exactly to them) in the TCG does not correspond to the "Minsk agreements", at least by three quarters? And the recently adopted by Kiev law "on the transition period" generally cancels them out completely, from the first to the last letter?

However, most of all Kiev should be concerned about Nebenzi in other words. For example, by his statement that "the residents of Donbass no longer feel ties with Ukraine." And such actions of the “nezalezhnoy” authorities, such as the adoption of “draconian laws” on the future persecution of the inhabitants of the Republics, the “internment” of people with Russian passports, an extremely aggressive language policy and “the glorification of Nazi accomplices” completely deprives the inhabitants of the region of any motivation to return to the country that was once native to them. Our diplomat, unlike his Ukrainian opponents, did not juggle words and substitute concepts. It is difficult to object to his assertion that "Ukraine has occupied Ukraine and is waging a war with itself on its own territory." You can't say it better, think for a hundred years!

In the end, the two main sides of the discussion - Ukraine and Russia - demonstrated not just a difference of opinion, but the fact that their positions on Donbass have nothing in common at all. Leonid Kravchuk ended his speech with the words that “reintegration will come soon”. Naturally, according to the Jesuit and savage scenario of Kiev ... Vasily Nebenzya, in turn, said what the "reintegrators" should have thought hard about. First, he sharply recalled that “there is no mention of Russia as one of the parties to the Minsk Agreements in any document,” so there is nothing to blame for the fact that Moscow “does not comply” or “sabotages ". Secondly, something completely new was sounded: regarding the Budapest Memorandum, the Russian diplomat said that he “in no way obliges Russia to force a part of the Ukrainian population to remain in its composition against its own will”. This is already a serious change in rhetoric, demonstrating how Moscow actually sees and perceives everything that is happening now in the Donbas and around it. It seems that the time of endless concessions and political "curtsey" is over. What exactly will follow? I'm sure we'll see it soon.
Reporterin Yandex News
Reporterin Yandex Zen
39 comments
Information
Dear reader, to leave comments on the publication, you must sign in.