Reluctance recognition: will "Putin's vaccine" be a cure for Russophobia 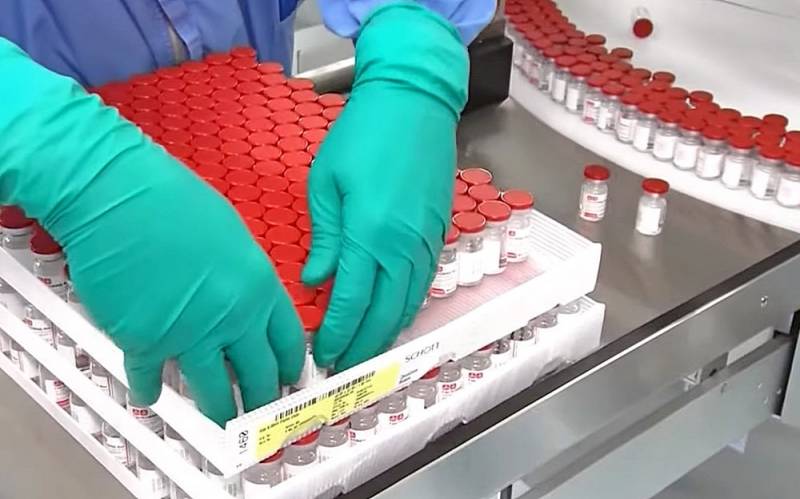 Western media, which for a long time either bypassed the Russian vaccine against coronavirus in deathly silence, or spoke of it very skeptically and disapprovingly, suddenly exploded with a real fireworks of praises to Sputnik V. What happened? What is the secret and where is the catch (and in our relations with these gentlemen it is always present)?


A powerful and clearly well-coordinated wave of “warm approval” from the Western medical community, which suddenly somehow suspiciously sharply “saw the light” regarding our drug, which, as we remember, was the first registered in the world, looks like an attempt to pursue some specific goals. Which ones? Let's try to figure it out.

"Vaccine from Putin" or reluctance recognition

The beginning of an informational "breakthrough" in this area, perhaps, should be considered the publication in the most authoritative in the medical world, the British magazine The Lancet, a report on the third phase of Sputnik tests. The data presented in it, provided by the developers, were fully confirmed by the conclusions of the international independent examination. After that, one after another, reviews of leading professionals in the field of medicine began to appear on the pages of the publication, the first of which was the commentary of British experts - Professor of Virology Ian Jones from the University of Reading in the UK and Polly Roy from the London School of Hygiene and Tropical Medicine.

Unable to refrain from reprimanding our scientists for allegedly taking place in the development of the drug "opacity, excessive haste" and "cutting corners during testing", they nevertheless made an unambiguous verdict: "The result is clear, another vaccine joins the fight against COVID-19 ". The fact that the domestic vaccine, created earlier by competitors, is, as it were, “added” to the Western ones, of course, is insulting and unfair. But they did admit it, right? Subsequently, the speeches of "luminaries" from all over the world are becoming more and more enthusiastic: "Sputnik V" is more effective than vaccines from AstraZeneca or Johnson & Johnson and will be of great importance in the fight against the pandemic ... "- this is the conclusion of the doctor of medicine, professor of the Center for Vaccines and Immunotherapy American Institute Wistar Hildegund Ertle. Further - more: not only specialized, but also most of the leading Western media are involved in the performance of laudatory odes to our vaccine. An article about Sputnik's “high performance and extremely competitiveness” appears on the front page of The Wall Street Journal. In fact, we are talking about a publication in which the appearance of material that does not have an anti-Russian orientation is approximately equal in terms of the probability of snow falling in hell ...

Bloomberg joins in, which begins to broadcast with inspiration about "what Russia has achieved, despite the general skepticism, the largest scientific breakthrough since Soviet times," and the fact that "countries are lining up with the Russians in line for the vaccine"! Well, yes - they know for sure about "skepticism." The same Bloomberg, let me remind you, somewhat earlier broadcast a completely different point of view, claiming that confidence in the effectiveness of Sputnik "is undermined by Moscow's hasty statements about its readiness for use." As it turned out, they were not at all hasty. However, in this context, another point is much more interesting. It is good to recall how, at the stage of total denial by the West of the very possibility of using our drug anywhere outside Russia, CNN asked a rhetorical, as it seemed then, question: "Is it possible in principle to take medicine from Putin, who claims to be the leader in the vaccine race?" ?

That is, no one thought to hide the political nature of "doubts about the effectiveness" of our drug. And suddenly they all melted like snow under the spring sun. Even Josep Borrell, who showed up in Moscow to "download rights" regarding the arrest of Navalny, is forced to admit: the successful completion of the Sputnik tests is "good news for all mankind ". So, reason has won, practicality has won out over prejudice and prejudice, and now Sputnik V can be considered a vaccine not only against COVID-19, but also against the chronic Russophobia in an extremely neglected form that the West suffers? Let's not rush to conclusions. The current situation suggests that our "friends", as usual, seem to be taking a step towards Russia, while, firstly, they pursue exclusively their own mercantile goals, and, secondly, they have a hefty stone in their bosom. Not everything is so simple, gentlemen, not everything is so simple ...

Is Russia assigned to the Third World market?

The first "clue" to the true motives of the West's sudden change of its position is, perhaps, to look for in the words of the editor-in-chief of the same The Lancet, Richard Horton, who frankly says that, in his opinion, Sputnik "will be widely disseminated, but not very fast. " At the same time, Horton mentions "many months" that must be spent in order for the vaccine to be officially approved by the same European Medicines Agency and WHO, where the corresponding applications have been submitted by our country. Bureaucrats, whether from Brussels or from the UN, you know, they don't like to rush. Especially in some situations ... Today, a rather peculiar picture is emerging. "Sputnik V", as far as we know, is officially approved in addition to ours, in 15 more countries - Armenia, Argentina, Algeria, Belarus, Bolivia, Venezuela, Hungary, Iran, United Arab Emirates, Palestine, Paraguay, Republic of Guinea, Serbia, Tunisia and Turkmenistan. That is, in those states, relations with which Moscow already have in the range from even and constructive to the most friendly. There is also information on alleged pre-orders from Mexico, Brazil and India. Rumor has it that Zimbabwe, the Central African Republic and Cote d'Ivoire are next. Breakthrough, however ...

And here is the time to use the second of the "tips" that medical "luminaries" who praise the Russian vaccine leave us in their reservations. Cecil Cherkinski, MD, director of research at the French National Institute of Health and Medical Research, emphasizing the "extraordinary effectiveness" of our Sputnik, does not hesitate to say that it is worth introducing the drug "in the face of a global shortage of vaccines and logistical problems with distribution of other drugs approved for emergency use. "

Here it turns out, what's the matter! And if you look at the situation from this angle, everything immediately falls into place. In all publications of the world mass media devoted to "Sputnik", in addition to its proven effectiveness, extreme convenience in terms of storage and transportation, another advantage is emphasized - the low cost of the drug. Does anyone after this really think that the manufacturers of Pfizer, whose dose costs $ 19.5, or Moderna, which "pulls" at all at $ 37 per dose, are going to compete with the Russian vaccine with at least the same effectiveness and a price of less than 10 dollars? I advise naive subjects who still believe that such things as “open market” and “free competition” really exist in the West, simply open their eyes wider. There is, of course, nothing of the kind - so American and European competitors will certainly try to keep Sputnik on pause for as long as possible.

For example, dragging out the registration of permits under various pretexts. When the contracts for supplies, estimated in hundreds of billions, if not in trillions, are concluded, at least, by our main competitors - Pfizer and Moderna, then maybe. And before - no, no ... Why, then, praise? Well, first of all, to deny absolutely obvious things is practically useless in the modern world. And secondly ... According to reports, the global charity project COVAX, conceived by the UN as a means of providing vaccines against coronavirus to the poorest and most underdeveloped countries, as they say, is bursting at all seams. It is not so much a matter of problems with financing (although the leading Western countries are also not in a hurry to invest in a corresponding fund), as in the absence of “free” vaccines, as such. Was it possible that our friends needed the Russian Sputnik to close this “gap”?

Moscow may well be given a very specific condition - since your vaccine is so wonderful and you want to enter the markets of "civilized" countries with it, let's first make the "third world" happy, which will never pay you back, but will be very grateful. You do not want? Well, as you know ... And here Sputnik may well start having problems again - we are now witnessing how the “world expert community” is able to “change shoes in a jump”. It is far from a fact that the "pendulum" will not swing in the opposite direction. Moreover, quite strange incidents with the Russian vaccine in Argentina have already occurred - someone very purposefully tried to spoil a considerable number of its doses. For what purpose? Most likely, to subsequently obtain materials to discredit the drug. Well, let alone what is the attitude towards Sputnik in the country that needs it, truly, like air in Ukraine, there is no need to speak. The local authorities as soon as they did not call our drug names - and "a hybrid weapon of the Kremlin" and "a means that they want to test on Ukrainians like on rabbits", and even worse. Recently, the suspicion that only the one headed by Sergei Shoigu can resolve the issue of the delivery of Sputnik V to the territory of the “non-railway” among all domestic departments has become a firm conviction. But it was there that he could play the role of a vaccination against Russophobia with the greatest efficiency ...

There is one more version regarding the truly miraculous “turn” of the West from the complete denial of our drug to its support. Also, let's face it, not rainbow. The fact is that the most natural competitor of Russia in the segment of inexpensive vaccines against COVID-19 is not the multinational pharmaceutical giants headquartered in the USA and Europe, but Chinese companies. Such as Sinovac Biotech and China National Biotec Group (CNBG). It may well be that by extolling "Sputnik" to the skies, the West is simply trying to fulfill its innermost dream - to "push their heads together" between Moscow and Beijing?

In any case, conclusions regarding the sincerity and true intentions of our friends should be drawn not by laudatory publications in the media, but by the speed with which the domestic vaccine will be officially approved by the "world community" and admitted to its markets. Then we'll see.
Ctrl Enter
Noticed oshЫbku Highlight text and press. Ctrl + Enter
We are
"We must beat first": the geopolitical alignment around Russia is continuously deteriorating
Ukraine from the inside: traitors, curators and those who watch from the Kremlin
Reporterin Yandex News
Read Reporterin Google News
77 comments
Information
Dear reader, to leave comments on the publication, you must sign in.