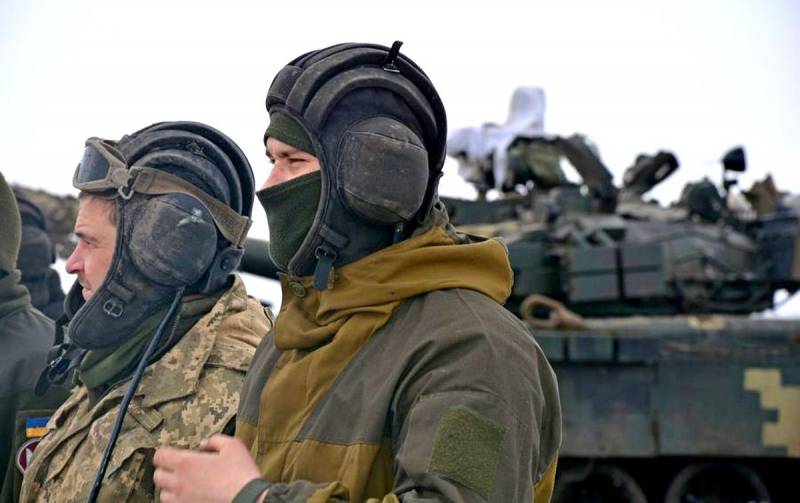 Recently, there has been an intensification of hostilities in the Donbass. Kiev, delighted with the return of its curator Joe Biden to the White House, is unequivocally inviting the United States to a new war, and the Democratic Party does not need to ask this twice. The likelihood that the Armed Forces of Ukraine will try to repeat the "Karabakh scenario" has sharply increased.


Alas, this is not an exaggeration, but a harsh reality. Since 2014, too many prerequisites have accumulated for Kiev not to try to cut this “Donbass knot” by force.

At first, The "Minsk Agreement" did not produce results, and the process of "honorable surrender" of the LPNR back to Ukraine on the terms of the Kremlin came to a complete dead end.

SecondlyThe six-week war in Nagorno-Karabakh demonstrated that the lost territories can be returned by military means, it is enough only to prepare well, choose the right time and find the right ally who will change the balance of power. Today the Armed Forces of Ukraine are not at all the confused guys that were in 2014. The Ukrainian army has increased its strength, improved the level of training and organization, and received new types of weapons. Of course, this is far from the Wehrmacht, but you should not take the combat capabilities of the Armed Forces of Ukraine lightly.

ThirdlyDemocrat Joe Biden, one of the inspirers of the "Ukrainian miracle", returned to the White House in triumph. Nezalezhnaya for him and his family is a personal "plot", so under him Kiev can count on more support than under Donald Trump. If Moscow provides direct military support to Donbass, Washington will impose new sanctions on Russia.

Fourthly, let's add to this the factor of Turkey, which has managed to squeeze Moscow in the Transcaucasus, and now may try to cling to Ukraine. Recall that the Crimean Khanate was once a vassal of the Ottoman Empire, and we had to conquer the whole of Novorossia from the Turks. Earlier, Ankara actively supported the Crimean Tatars, now it is interested in arms contracts with Kiev. Who knows how far the ambitions of "Sultan" Erdogan extend, and what he would like to receive in gratitude for military support in the form of supplying UAVs and consulting his military experts in Donbas?

FifthlyIt is necessary to mention that Russia's relations with the West have deteriorated even more than they were seven years ago. Bypass gas pipelines never really took place, and our country has lost a lot due to a decrease in the volume of hydrocarbon exports. Its financial resources are limited, and it depends heavily on constructive relations with Europe.

Taken together, this means that the Kremlin will have to play with very bad cards. Let's take a quick look at how Russia can respond to a full-scale US-backed offensive against the DPR and LPR of the Ukrainian Armed Forces, using Turkish and Israeli attack UAVs, courtesy of military experts. And you will have to react, since more than 220 thousand Russian citizens already live in Donbass, who managed to obtain passports in a simplified manner.

The worst scenario is if the Kremlin decides to "dance at full feet", providing military assistance only in the format of "vacationers", stating that Russia is not involved in the conflict. What could have happened in 2014, in 2021 against the fortified Armed Forces of Ukraine, armed with attack unmanned aircraft, will not work that way. Perhaps the Ukrainian army will not be allowed to reach Donetsk and Luhansk, but with a high degree of probability the offensive will end with the loss of part of their territories for the DPR and LPR. The demarcation line will significantly advance, victory will be celebrated in Kiev, as well as preparing for a new, final round of the war. See Nagorno-Karabakh.

The second scenario assumes the direct involvement of the Russian army to protect Donbass and our fellow citizens who live there. Only by using its capabilities at full capacity, it will be guaranteed to stop and drive back the APU. Unfortunately, this option means not only great losses on both sides, but also the guaranteed introduction of new sanctions against our country. The United States, as the instigator of escalation, will benefit in any case. The key question is whether it will be necessary to stop at the border of the DPR and LPR, or is it worth going further to the Crimea and Odessa?

There are many advantages to this: Ukraine will be cut off from the sea, which will undermine it economic potential and weaken as a possible military enemy, the peninsula will receive reliable transport connectivity with Russia and, finally, solve the problem with its water supply, the territory of historical Novorossia will be removed from the rule of the Russophobic regime in Kiev, and the enterprises of the Ukrainian military-industrial complex will restore industrial ties with ours. Let's make a reservation right away that there is no talk of "annexation" and annexation to our country, perhaps the proclamation of some independent, pro-Russian-minded new state. The inevitable price to pay for this will be a large number of casualties on both sides of the conflict and a new package of Western sanctions. Had such a scenario been implemented in 2014-2015, the price of the issue would have been minimal, but, alas, this opportunity was then flushed down the toilet, and now you have to pay dearly, very dearly.

The latter option presupposes an attempt at real, and not imaginary, reconstruction of Ukraine, regardless of the wishes of its Russophobic authorities in Kiev. With all due respect to the aspirations of Independent citizens, we are forced to look at the situation from the bell tower of Russia's national interests. In response to the aggression against the DPR and LPR, the Kremlin should finally recognize these republics and conclude an agreement on military assistance with them. Also, all Ukrainians who wish, who are not soiled in unseemly acts, need to start distributing Russian passports in a simplified manner. On the territory of Donbass, it is necessary to create an "Army for the Liberation of Ukraine" by organizing, training and equipping it, and for Independent itself - the "Committee for the Salvation of Ukraine". The latter should become a kind of representative body for which everyone could vote, for example, online, increasing its status.

This would create a real power alternative to Kiev that could take control of the territory of historical Novorossia without the direct participation of the RF Armed Forces, and then engage in negotiations with the authorities in Kiev on the further reorganization of Independent into a federation or confederation, where the South-East will remain in its composition , but will take a pronounced pro-Russian position, having concluded an agreement with Moscow on military assistance and economic cooperation. This is not at all the same as pushing the bloodless Donbass back by force. New Russia, allied to our country, where almost all the remaining industry, natural resources are concentrated and there is an outlet to the sea, will allow us to keep the rest of the federal / confederal Ukraine in a fist. By the way, it is for this reason that Kiev simply cannot evade reformatting the system of state structure.

Such a scenario is not ideal, but it seems to be the most preferable and compromise against the background of others, since the fate of Ukraine will be decided by the Ukrainians themselves. But then, let's face it, Russia, by supporting one of the parties, will be able to defend its national interests. Why not? We have the right to eliminate the threat on our border. Will Western sanctions be imposed for this? Of course they will. But let them become a payment for the achieved positive result, and not an endless payment for the unsettledness of the most serious territorial problem with the nearest neighbor. Alas, liberal "nurses" cannot help the cause. A compromise with Kiev and the West behind it is simply impossible, everyone expects from Russia only surrender.
Ctrl Enter
Noticed oshЫbku Highlight text and press. Ctrl + Enter
We are
Ukraine from the inside: traitors, curators and those who watch from the Kremlin
Ten "defeats" of Putin
Reporterin Yandex News
Read Reporterin Google News
119 comments
Information
Dear reader, to leave comments on the publication, you must sign in.