Biden's plan against Nord Stream 2 will make Russia even stronger 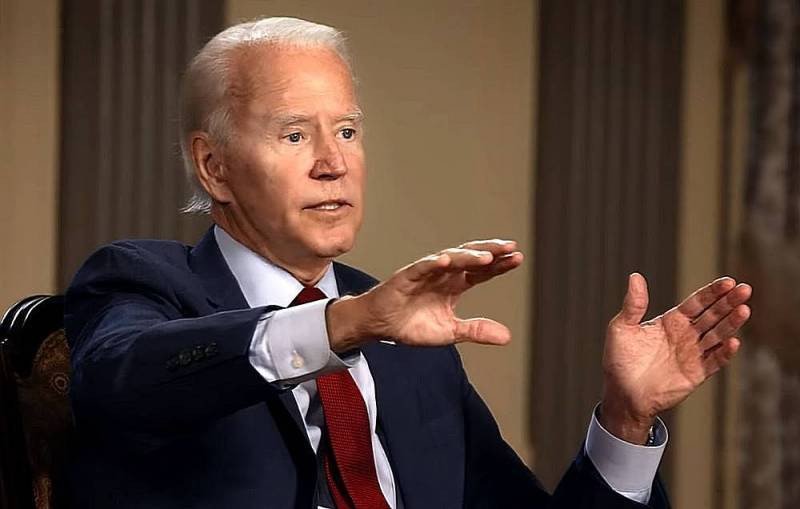 In my previous articles, discussing the fate of the ill-fated project SP-2, which became a stone of discord between the Russian Federation and the United States, I hintedthat the newly arrived US administration has its own plan and its own vision of the prospects for this project.


Even despite the fact that the new owner of the White House does not have many opportunities to influence the lifting of the sanctions blocking the project (let me remind you that they were passed by the law of the Congress and in order to cancel them the Presidential Decree is not enough, a new law is needed to change the previous one, and USA on this issue full consensus, how Biden will overcome it, I do not know), nevertheless, this does not prevent him from making plans that can be knocked out of the Russian Federation for allowing the completion of the SP-2 and its further operation.

Biden, although very old, has not yet completely lost his mind. What is his benefit from this? He does not look like a clinical idiot (although we are making fun of this), then what is his Sly Plan?

The thing is that even before the start of his election campaign, he had a backup plan in his back pocket for defeating the Russians. With him he won the elections. I don't know how feasible it is, but at least he didn't hide it. The plan, like everything ingenious, is simple. And it is precisely because of its presence that I believe in the promises of the American side to make concessions on the completion and certification of SP-2. The plan is that there is no need to fight SP-1, SP-2 and other "Forces of Siberia" and "Turkish streams", which fill the treasury of the Russian Federation with petrodollars by selling its bottomless natural resources. We must kill the very idea of ​​using hydrocarbons. Why generate electricity from environmentally polluting, polluting and greenhouse gas coal and gas? They were used as early as the 19th century. And in the courtyard of the 21st century. It's time to switch to hydrogen and electricity - there are less losses in the network, the efficiency is higher, the heat transfer is higher, the RF will bend itself!

Therefore, I am not at all surprised to see the deranged Greta Thunberg on the podium of the UN summit on climate change - everything is going according to plan. According to the plan of the globalists. Coal, oil and gas are not included in their plans, they rely on water, sun, wind or an atom for generating electricity in extreme cases (to compensate for power drops). There are already single copies of engines built on other physical principles that generate energy without using the products of combustion of hydrocarbons, they were simply slowed down for the time being by the hydrocarbon lobby (including the Russian one). Biden hopes to strangle us with new ones technologythat's why he ruins his oil industry and shale. With his arrival black times begin for them.

The closure of the Keystone XL pipeline linking the oil sands of Alberta, Canada to US refineries on the Gulf Coast (in Illinois, Nebraska, and Texas), are just flowers, the berries will come later. This project several years ago became the compensation that Trump offered to Canadian Prime Minister Trudeau in exchange for Canada's concessions on the new format of the North American trade partnership. The supply of Canadian heavy oil to the South of America was exempt from import duties. For Canada, it was the infrastructure project of the century.

Canadians trusted Trump so much that the project was financed by the largest Canadian bank Royal Bank of Canada, and the province of Alberta spent $ 1,5 billion on it from its budget, providing also state guarantees for 6 billion. Now, to the horror of Canadians, this project is frozen. Sleepy Joe's next move is a US shale oil ban. On the one hand, all these solutions are part of Biden's decarbonization program economics... On the other hand, they are really directed against Texas companies, Trump's sponsors and Republicans. How much they will hit the Russian economy - we'll see. So far, this is increasingly reminiscent of the well-known saying: "Beat your own so that others are afraid!"

Escape from oil. The first one went!

Some were already scared. Further I cite only the facts, draw your own conclusions. On January 22, just after the news of Biden's closure of the Keystone XL project, the Norwegian sovereign wealth fund sells its entire block of shares in oil companies.

For your information:: The State Pension Fund of Norway (aka Oil Fund), the largest sovereign wealth fund in the world. It was established in 1990. At the end of 2020, its cost was 10,914 trillion kroons (more than 90 trillion rubles). Investments in shares accounted for 72,8% of the investment portfolio, in bonds - 24,7%, in real estate - 2,5%. At present, the fund owns about 1,5% of all shares in the world, it owns shares in more than 9,2 thousand companies from 74 countries. The largest shares in his portfolio are held by Apple, Microsoft, Alphabet (the holding company of Google), Nestle and Amazon.com.

And all this did not prevent this fund from selling the entire package of shares in its portfolio of companies that work in the field of oil exploration and production. What for?! Maybe the Norwegians know something?

The value of the oil portfolio in 2019 was estimated at about $ 6 billion, and it was completely sold out by the end of 2020.
- Trond Grande, deputy head of Norges Bank Investment Management (NBIM), told Bloomberg.

Note to yourself, immediately after Biden's victory, without even waiting for the inauguration. Doesn't this give you any idea? NBIM is a division of the Norwegian Central Bank and is responsible for fund management.

Oil rose to an 11-month high. The move completes a multi-year sovereign wealth fund exit from the industry that has shaped the Norwegian economy for much of the last half century.
- the agency notes.

At the end of 2020, the fund received the second largest income in more than 20 years - its value increased by 1,07 trillion Norwegian kroner ($ 123 billion), or 10,9%. However, investments in the oil and gas industry resulted in a loss of nearly $ 10 billion. The Oil Fund still owns shares in integrated oil companies, in particular, Royal Dutch Shell Plc.

“It's rubbish,” thought Stirlitz, “it's high time to buy up Gazprom shares. It will take decades for Biden to invent a perpetual motion machine and switch to green energy. Having buried its oil and gas production, the United States will again turn from a net exporter to a net importer of oil, and maybe even gas. Everything that does not kill us makes us stronger!

What are your thoughts on this? Sleepy Cowboy, who replaced the deranged Undaunted Cowboy, has finally gone crazy? Or does he know something? Something I don't really believe in fairy tales about a perpetual motion machine. Wait and see...

The next two articles will be devoted to debunking the next myths that have developed over the past 7 years. The first will debunk the myth about the ability of the Americans to transfer the EU to their own LNG and explain why they have not done so yet. The second will be devoted to Biden's plans to decarbonize the world economy and will remove the myth about the maintenance of Ukraine at the expense of the Russian Federation by transit through its GTS of Russian hydrocarbons.
Ctrl Enter
Noticed oshЫbku Highlight text and press. Ctrl + Enter
We are
Why did Biden need a Ukrainian GTS
Peace enforcement operation. Russia inflicts a preemptive strike on Kiev
Reporterin Yandex News
Read Reporterin Google News
10 comments
Information
Dear reader, to leave comments on the publication, you must sign in.