New faces in Russian politics: the likelihood of their appearance and the way to come to power 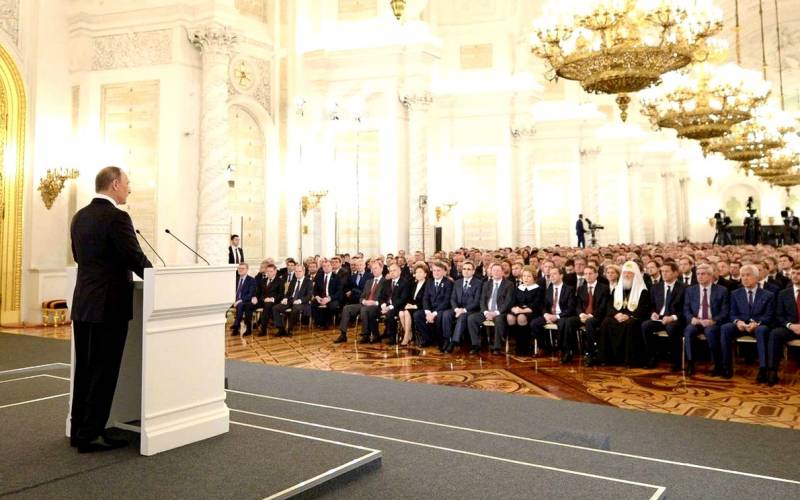 So, last time we stopped at the fact that the further development of Russia is impossible without renewing the ruling elite. However, you need to understand that this is an extremely difficult task for any state, because the “upward” pass is always given to an extremely limited circle of people. Ideally, this should weed out those who are unable to participate in the government, but in practice, as you know, everything turns out differently.


In the feudal era, access to power was closed to anyone or almost everyone who was not of noble origin. In the modern world, everything is different: only those who share the principles of the ruling elite and have proved in practice their readiness to follow them in any situation can make a career in power structures. However, this in itself does not ensure a career; in any case, approval is needed "from above".

Nevertheless, renewal and even a change of elites is by no means an incredible scenario. And here, relatively speaking, three options for the development of the situation are possible. They will be discussed.

"Let the storm break out stronger"

So, option number 1. There are enough examples in history when the change of the ruling elite took place as a result of one or another shock. We will not consider foreign conquest, but it is worth talking about internal cataclysms. And these are not only revolutions.

For example, in France, a fairly serious personnel renewal in power circles of various levels took place under Henry IV, the king, who stopped the religious wars that tormented the country for forty years. His task was greatly facilitated by the fact that the former institutions of state administration almost did not function. Thanks to the fact that "Henri the Fourth" made a bet not on the nobles, but on the educated representatives of the third estate, he managed to bring the country to a new stage of development.

In Russia, something similar happened under Ivan III, who completed the unification of the country and ended feudal strife. But this is a distant past, and we are more interested in events that are much closer in time. More specifically, the era of perestroika, during which the current Russian elite was formed, replacing the Soviet one. True, here we will boldly put a minus sign to the process of changing elites.

This period cost us no less sacrifices than the wars of Catholics and Huguenots in France or princely strife in Russia. The only difference is that after the collapse of the USSR - the main result of Gorbachev's reforms - more people died not from weapons, but as a result of the terrible impoverishment of the bulk of the population, rampant crime, alcoholism and other delights of the "capitalist paradise".

It was in such conditions that our current elite was formed, and this process was completed already in the 90s. It would even be more accurate to say that at this time the principles by which this elite exist were formed. They were completely and completely copied from the West, and since then, in fact, have not changed. They just became more "civilized", or something. As if their carriers heeded the call of Mikhail Zhvanetsky: “Why are you stealing from losses? Steal with profits. "

Albeit in a greatly simplified, exaggerated form, but it is these words of the genius Russian satirist that characterize the changes that took place in the circles of power in the late 90s - early 2000s. They happened because by this time it became clear that if the open robbery of the country continues, then soon there will be nothing to rob. If only because Russia, especially after Khasavyurt, runs the risk of repeating the fate of Yugoslavia. It was at this time that the "humanitarian" bombing of our brotherly state in the Balkans was taking place, so that an example was before our eyes.

In general, it became clear that certain changes are needed. As a result, the rules of the game in the elite circles were slightly adjusted, without actually changing, and the most greedy and stubborn ones, like Khodorkovsky, Berezovsky and others, were pushed aside. The "new" times have come: from now on it became fashionable to be not a racketeer, but a policeman or an official. And many of the sincere fans of the Brigada series, and even those from whom the characters of the main characters were written, found themselves in the public service.

Now let us briefly return to history and recall an even sharper change in the ruling elite that took place in Russia after the October Revolution. However, this "perestroika" looks more advantageous than the late Soviet one. With all the ambiguity of the Soviet period of our history, it is impossible not to notice that Lenin, Trotsky, Sverdlov, Dzerzhinsky and Stalin, who, by the way, did not have experience in government, turned out to be incomparably more competent than the leaders of February, many of whom held high government posts in the Russian Empire. It is hard to imagine what would have happened to our country if the Bolsheviks had not taken power from them. That is, in 1917, in contrast to the late 80s - early 90s, more talented people came to power. Therefore, even now, in the XXI century, you can periodically hear that the events of a century ago would be nice to repeat.

The motivation for such calls is understandable, but the majority of Russian people hardly want this. Indeed, in this case, sacrifices and devastation will be inevitable, but new Lenins and Stalins may not be found. And one cannot discount the fact that now our "partners" are not weakened by the world war, as it was in 1918. There is every reason to believe that then the interventionists did not behave as decisively as they could, precisely for this reason. How will they act if there is a revolution in Russia now? And there is little doubt that there will be. Therefore, with the president's words that our country has exhausted the limit on revolutions, it is worth agreeing.

However, we live in an era of democracy, and someone will say that the renewal of the elites can also happen through a banal victory in the elections. For example, a group of people who are not indifferent to the future of the country gathered, organized a party that gradually gained strength, in fact proving its readiness and ability to work effectively for the good of the country, and, in the end, won the elections. Is this an unrealistic scenario?

How to say. To begin with, it is worth recalling the fate of the former presidential candidate Pavel Grudinin. Despite the fact that the dark deeds in which he was accused from all television screens of the country turned out to be quite real, the fact that they were suddenly remembered on the eve of the next presidential elections leaves little doubt that he was openly “drowned”. Grudinin, of course, was still not a real competitor to the future winner of these elections, but, apparently, the principle of "it is better to stay out of sight" worked.

But this is not even the most revealing example. There is hardly a better piece of evidence for the real face of democracy than recent events in America. Trump's victory in 2016 seems to speak precisely in favor of democracy, but all subsequent events rather indicate that the elite of the United States simply underestimated the “impossible Donald,” and therefore largely let the situation in those elections go by.

Moreover, this applies not only to Democrats, but also to Republicans, among whom there were also enough "anti-Trumpists", but who lost the primaries to the future 45th president with a bang. In general, his opponents from both parties had to work literally for the next four years to correct their mistakes. And, I must admit, they worked at the "5+".

On the eve of 2018, the Russian elite could fully take into account the negative experience of their overseas colleagues, so they immediately used all resources even against a much weaker enemy than Hillary Clinton Trump was. Berezheny, as they say ... However, it is quite possible that no one studied with anyone, and “ours” were initially ready to eliminate even purely hypothetical threats. And this is not so important in our question, because this is just an assumption.

Is there a third way?

With regard to the existing Russian elites, a lot of negativity was voiced above, and readers will probably agree - the negative is just. But for the sake of the same justice it is worth adding a spoonful of honey to this ointment. For common sense dictates that you should never row one size fits all. And that in any power structures, in addition to careerists and grabbers, there are also quite decent people who really work for the good of the country. The late Yevgeny Maksimovich Primakov, for example, was able to prove this by personal example in a much more troubled time than now. And at the time when he headed the Foreign Intelligence Service, which he did not let to collapse, and when he headed the Foreign Ministry and the government. And he is not alone in our history. After all, otherwise it is unlikely that Russia would have survived until 2021, while achieving certain successes.

Of course, there are people like Primakov even now. You can name specific examples, but this is not our task. And in that, starting from this fact, to designate the third possible scenario for the development of events. This path can be conditionally called "revolution from above". This term was introduced into use by Marx, denoting by this the deep reforms that followed in European countries after the unsuccessful revolutions of 1848-49, but we will expand it a little without changing the meaning. And then the reforms of Peter I, and Stalin's modernization, and the Meiji revolution in Japan, and the same reforms of Bismarck (which Marx called, among others, "a revolution from above"), and many other similar turning points in the life of different countries fall under this definition. , sometimes radically changing their appearance.

These processes were united by several points. First, they all led to the modernization and strengthening of the countries where they were carried out, sometimes very dramatically. Second, many new people came to power, who showed themselves in the course of reforms, although the degree of elite renewal in different cases could be different. And, finally, third: they were all inspired by the representatives of the current government, who understood that “the lower classes no longer want”, and, therefore, it is necessary to act while “the upper classes still can”. That is, those about whom we spoke above, taking Primakov as an example.

Such a profound change, of course, led to a certain political instability, but made it possible to avoid genuine revolutions and coups, which means numerous casualties and devastation. How likely such a development of events is in Russia, we will try to speculate next time.
Ctrl Enter
Noticed oshЫbku Highlight text and press. Ctrl + Enter
We are
"We must beat first": the geopolitical alignment around Russia is continuously deteriorating
Ten "defeats" of Putin
Reporterin Yandex News
Read Reporterin Google News
108 comments
Information
Dear reader, to leave comments on the publication, you must sign in.