Americans compared the Su-35 with their new F-15EX fighter 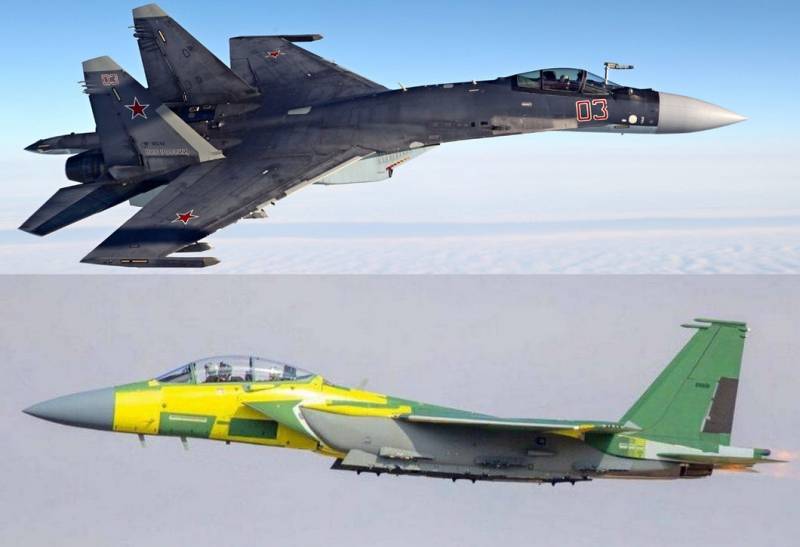 With tensions rising between the United States and its major potential adversaries, the likelihood of a serious struggle for air superiority arose. As US Air Force F-15s increasingly face metal fatigue, the Pentagon is trying to expand its fleet of heavy fighters with new aircraft upgrades.


To meet the requirements of the US Air Force, a new F-15EX fighter was developed, which The Military Watch Magazine experts decided to compare with the Russian Su-35. The American aircraft integrates a powerful new radar with an active phased array, improved electronic warfare and avionics systems, and significantly increased the payload - up to 22 missiles compared to the original 8. In order for the fighter to support the F-35 and F-22, the new algorithms for data transmission. The operating costs and maintenance requirements of the F-15EX have been significantly reduced compared to its predecessor.

Comparing the capabilities of the Su-35 and F-15EX, one can see that their designs differ markedly - the Russian fighter is positioned primarily as an aircraft for gaining air superiority, while in the case of the F-15EX, the emphasis is also on strike capabilities. aircraft.

The Russian Su-35, thanks to its ideal aerodynamic glider and controlled thrust vector of the engines, has a number of significant advantages in short-range combat. The F-15EX lacks any thrust vectoring capabilities, and although the F-15 was originally designed as a versatile fighter, the new modification is more suited to combat beyond the visible horizon.

The advantages of the Su-35 include a lower radar signature.

The F-15EX in turn carries a much larger payload with its 22 AIM-120D missiles with a range of up to 180 km. Although the Su-35 currently carries only 14 missiles, it benefits from their range. For example, the R-37M can reach a speed of Mach 6 and hit a target at a distance of up to 400 km.

Thus, the Su-35 has more than twice the range of destruction of air targets. The Su-35 will soon receive a new K-77 missile with a range of 197 km and a unique guidance system with an active phased antenna array - all this will make it extremely difficult to evade it.

The high maneuverability of the Su-35 will allow it to partially compensate for the smaller payload and will provide the aircraft with significantly greater "survivability" due to the better ability to evade enemy missiles using complex aerobatics.

Ultimately, both the Russian Su-35 and the American F-15EX represent the most advanced fourth-generation heavy fighters. Despite the smaller capabilities than their more expensive and inconspicuous counterparts, the Su-57 and F-22, this generation will be in demand even after the 2050s.
Ctrl Enter
Noticed oshЫbku Highlight text and press. Ctrl + Enter
We are
A serious competitor to the Russian Su-34 has appeared in the USA
“Not a single chance”: Americans compared the capabilities of the MiG-31 and F-22
Reporterin Yandex News
Read Reporterin Google News
1 comment
Information
Dear reader, to leave comments on the publication, you must sign in.