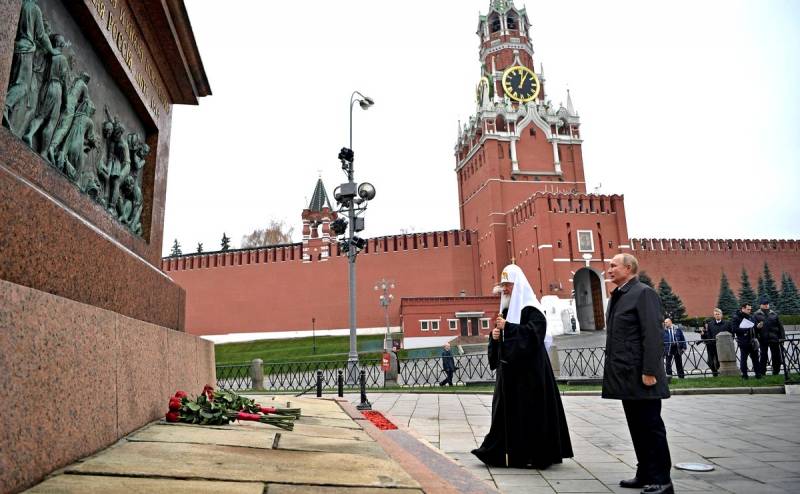 Starting the current conversation, let's return to what was discussed in previous publication... And it was said in it that the main goal of globalism, the main conductors of which are transnational corporations acting through the "lured" politicians, is the destruction of the sovereign state as the main deterrent to the expansion of capital and influence. Therefore, the ideologists of the "brave new world" see China and Russia as their main threats today.


Both countries, as already mentioned, have their own problems, but the position of our eastern neighbor in "resisting this opposition" is much stronger. It is worth following the actions of the Celestial Empire, and you involuntarily conclude that in all the main directions of foreign and domestic policy they have a clearly formulated strategy that is being consistently implemented, albeit not without flaws. In short, the Chinese know in which direction to move.

And what about us?

As a matter of fact, the main problem of modern Russia is precisely the absence of a coherent development strategy for years and decades to come. No, you can, of course, recall the loudly advertised national projects, an even more ambitious single national plan, according to which it is planned to invest as much as 39 trillion rubles in the country's development, but there is one serious "but". And it's not even about the fact that in the context of external sanctions, unclear prospects for oil prices and the still pending Great Depression 2.0, all these plans look about the same as the desire to create 2020 million high-tech jobs by 25 (there was such a thing, remember ?).

And that all these projects do not answer the main question: "WHICH country do we want to get as a result?" They will answer, they say, who knows how to produce the most modern military and civilian machineryamong the top 5 (or even top 3) world economies, etc. etc. And, most importantly, it has a high standard of living.

That's right, but people go to die for their country not because they are afraid of losing a high standard of living. And the formulations in the style “otherwise we will lag behind, lose our sovereignty and eventually share the fate of Yugoslavia”, for all their fairness, are not exhaustive, but raise another question. Why do we need this sovereignty?

And here we come to the conclusion that in the same China they know the answer to this question. They know him (for now) and in the USA, they knew him (once) and in the USSR. It is this knowledge, shared by the overwhelming majority of the population, that is the key sign of a superpower or a candidate country for such. It is obvious that modern Russia has the answer to this very "why?" not. Accordingly, there is no long-term development strategy for the state. And if we want to regain the status of a superpower again, we must find an answer to this question, otherwise there can be no talk of any breakthrough in development.

What the communists were right about

Someone might say that the main obstacle on this path is Article 13 of the Constitution of the Russian Federation, according to which "ideological diversity is recognized in the Russian Federation" and "no ideology can be established as a state or mandatory one." Let us venture to suggest that the point is not the absence of an official ideology. Everything is much deeper.

And to begin with, we note that ideology in our usual sense is a very short-lived phenomenon. Well, or at least dynamic, constantly evolving. Moreover, developing is sometimes so strong that if Marx and Engels looked at modern China, they would hardly call it communist. And all because any theoretical calculations, no matter how brilliant they may be, in practice are not always realized in the form in which the authors saw it. Or even they turn out to be unviable.

The answer to the question "Why do we need a strong Russia?" you need to look not in the ideological calculations of philosophers, but in what is rooted in the minds of the people. Although in order to formulate this answer, you need a person or a group of people who would openly voice this answer. So much so that 80 percent of the population exclaimed: "But he (they) are right (right)!"

Let's take an example from history. Many modern Russian historians say that the Bolsheviks, all those 70 years that they were in power, consciously or unconsciously emasculated the self-consciousness of the Russian people (as well as other peoples inhabiting our country). Yes, there are certain arguments in favor of such a point of view, but at the same time one indisputable fact cannot be denied: the idea of ​​social justice - one of the cornerstones of communist ideology - fully corresponded to the mentality of a Russian person with his eternal thirst for truth. This was the key to the victory of the Bolsheviks. Otherwise they would have ended their history in about the same way as the Cadets and the Octobrists.

Therefore, despite the fact that it is impossible to return to the past, it would not be superfluous to draw lessons from it. And it's not only about not repeating mistakes, but also about taking advantage of a truly successful experience. And who can say that the 8-hour working day, universal free medicine, education (from preschool to doctoral studies), and many other REAL steps towards building a just society are not a good experience?

One can argue, they say, all peoples strive for justice, why suddenly this striving has become a purely Russian trait? Of course not. But a Russian person will hardly find the social structure in the United States to be fair, although the average American (at least until recently it was like that) is sure that it is “United States” that is the fairest country in the world, and therefore is exceptional, the best in the world, etc. To many in America, their social and state structure seems fair, but the Bolsheviks were able to offer such a model of state and society that corresponded to the ideas of our people about justice.

We will not indulge in the argument “what is good for a Russian, death is for a German” further. And it is clearly not within the framework of this publication to determine the principles on which to build the “image of Russia of the future”. We have identified only one of them, perhaps the most important, but not the only one. It is important for us to understand that it is not so difficult to formulate these principles and build on their basis a development strategy for Russia as a world superpower. If only due to the fact that we already have such experience.

So what's the deal? Why hasn't this been done yet? Yes, in general, there is no secret here, and many readers (if not all) have already answered these questions themselves. Yes, yes, everything is trite like a rake: the current Russian elites do not need this in principle. Indeed, despite the fact that the 90s are over, but the people who then came to power (or became the owners of factories, factories, newspapers and ships) have not gone anywhere. And they still occupy the chairs (fortunately, not all) of the spacious offices in the Kremlin, on Okhotny Ryad and Krasnopresnenskaya embankment. And for the most part, they still see Russia not as their homeland, but as prey.

Someone habitually appoints the current president as guilty, but, despite the fact that no one relieves responsibility for what is happening, you need to understand that always and everywhere, in any state, the current political situation is determined not by the head of state, but by the ruling elite, then the very "deep state" with which Trump unsuccessfully tried to fight. Few succeed in going beyond the limits that this very elite sets for the president or even the absolute monarch. And only a few of them manage not to die as a result of another conspiracy.

Isn't this why Putin never tried to enter into a clinch with our "deep state"? And is it not because in one of the interviews he expressed his belief in the sincerity of Obama's intentions to close the Guantanamo Bay, which has not yet been closed, that he himself has repeatedly faced sabotage? So it's not just the absence of "real leaders", as in Vysotsky's song. The point is that in order to build a coherent development strategy for the country, Russia needs to renew the elites. Despite the complexity of the problem, it is not insoluble. We will try to talk about this next time.
Ctrl Enter
Noticed oshЫbku Highlight text and press. Ctrl + Enter
We are
"We must beat first": the geopolitical alignment around Russia is continuously deteriorating
Ten "defeats" of Putin
Reporterin Yandex News
Read Reporterin Google News
32 comments
Information
Dear reader, to leave comments on the publication, you must sign in.