"Bride" Su-57E: India returns to the issue of buying a Russian fighter 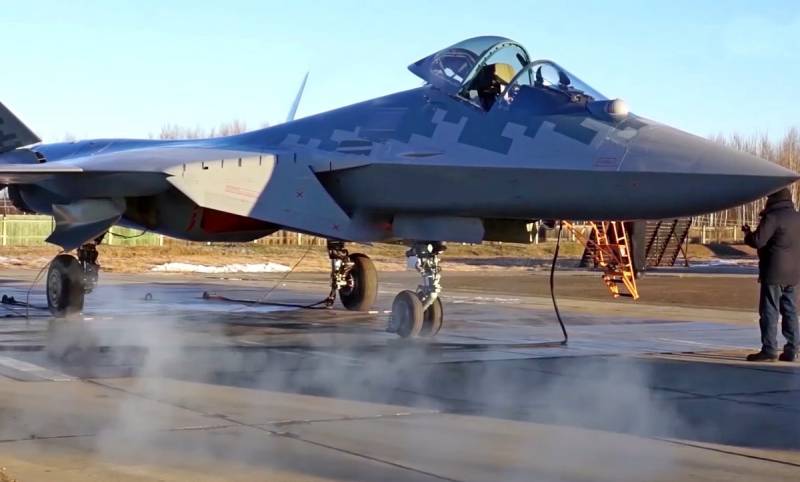 An international exhibition Aero India-2021 opens in the Indian city of Bangalore, where 14 countries will present samples of their weapons to picky customers from New Delhi. Among them will be Russia, which will have more than 200 types of weapons out of 601 declared for participation. Undoubtedly, special attention will be drawn to the export version of our fifth generation fighter Su-57E.


India's heightened interest in the most modern foreign weapons is due to its dangerous proximity to Pakistan and China, which supports it. New Delhi is happy to acquire weapons, while adhering to the principles of diversification of suppliers, so as not to depend on one one, as well as the gradual localization of their production at home. A striking example is the joint project of licensed production of the Russian T-90S tank. Our country is a long-standing partner for India, which highly values ​​Russian weapons for their high quality at a relatively low price. We brought to Bangalore the S-400 Triumph and Viking air defense systems, the K-16 armored personnel carrier and the K-17 BMP, the Ka-52 and Ka-31 helicopters, the promising multi-purpose light helicopter Ka-226T, as well as the Mi-28NE , Mi-171Sh and Mi-17V-5. The aircraft will include domestic MiG-35D and Su-35 fighters, an export version of the Il-76MD-90A (E) military transport aircraft and the Il-78MK-90A tanker aircraft. Also, the Indians will look with great interest at the Russian fifth-generation fighter Su-57E.

Rostec quite reasonably counts on deepening cooperation with New Delhi in the field of military aviation. With a dangerous neighbor like Pakistan at hand and a long-standing territorial problem with the state of Kashmir, India desperately needs the ability to dominate the airspace. The Indians began to buy Soviet MiG-21s back in 1962, and in 1967 they started their own production. In general, this determined the general vector of development of the military aircraft industry there. Almost 80% of the Indian Air Force fleet is represented by aircraft of Soviet and Russian production. There are also 50 French multirole Mirage 2000 (H / TH) and one hundred Franco-British Jaguar fighter-bombers. Among the modern ones, it is worth mentioning the Rafale fighters, a contract for the purchase of which in the amount of 7,87 billion euros was signed by New Delhi with Paris several years ago. Such is the diversification of suppliers.

True, it is necessary to mention that the French Rafale costs the Indians $ 218 million each, and the Russian Su-30MKI of the 4+ generation of local assembly - $ 83 million. The latter is a product of joint cooperation, when India received a multifunctional fighter jet to meet its requirements and assembles aircraft on its territory. Why did New Delhi suddenly start turning up its nose from Russian planes? Ill-wishers will say that because of their insufficient quality, but it seems that from the Indian side this is rather a marketing move aimed at knocking out the best conditions for themselves. Thus, specialized military publications in India note that the purchase of 110 MiG-35 and 114 Su-35 fighters from Russia may be associated with a condition for the transfer of technologies and localization of production by the customer himself. Also available in the Indian Air Force, 222 Su-30MKI fighters can be upgraded to the Super Sukhoi variant.

And we again return to the export version of the Su-57. Recall that initially it was supposed to be a joint Russian-Indian fighter of the fifth generation FGFA. However, New Delhi left this project, and our country had to bring it to mind on its own. The allegedly discerning Indians were not satisfied with the insufficient characteristics of the aircraft, which our ill-wishers are happy to repeat in every way. Indeed, the Su-57 had its own "childhood diseases" that needed to be identified and eliminated. True, the Indian daily The Economic Times, citing its sources, explained this decision with completely different motives. The Defense Research and Development Organization of India (DRDO) was primarily interested in the technologies of fifth generation fighters for their independent production. New Delhi then considered that they either already exist or are in the final stages of development. That is, the problem was not the poor quality of Russian fifth-generation fighters, but rather the intellectual property rights.

It is possible that making a combat aircraft of this level for India on its own turned out to be a somewhat more difficult task than initially imagined. Recently, Air Marshal of the Indian Air Force, Birender Singh Dhanova, spoke about the conditions for the acquisition of the Su-57 from Russia:

When it has already been put into service with you, only then will we be able to make a decision for ourselves. We are ready to consider it for acquisition after we see it in the case, and it will be submitted to us for consideration - assessment.
That is, the Indians did not give up on the project at all, but only temporarily removed themselves from it, allowing Moscow to eliminate all its "childhood diseases" at its own expense. Cynical, but pretty practical. And now New Delhi itself has asked to bring an export version of the Russian fifth generation fighter jet to his “bride”. For its part, our country is clearly ready for more flexible cooperation with a picky partner. Andrey Yelchaninov, First Deputy Chairman of the Board of the Military-Industrial Commission of the Russian Federation, said last year:

Various delivery options are being considered: a separate aircraft and an aircraft with a full range of weapons, with an after-sales service system. In addition, at the request of the customer, the appearance of the aircraft can be modified. So we are confidently talking about the export prospects of the Su-57.
It is quite possible that Rostec is ripe for the transfer of technology and localization of production of the Su-57E in India, and this fighter has more promising prospects than our enemies see it.
Ctrl Enter
Noticed oshЫbku Highlight text and press. Ctrl + Enter
We are
India will help equip the Russian army with T-14 Armata tanks
In Geneva, showed the world's first tires for flying cars
Reporterin Yandex News
Read Reporterin Google News
38 comments
Information
Dear reader, to leave comments on the publication, you must sign in.