Navalny behind bars: Russia began to act without looking back to the West 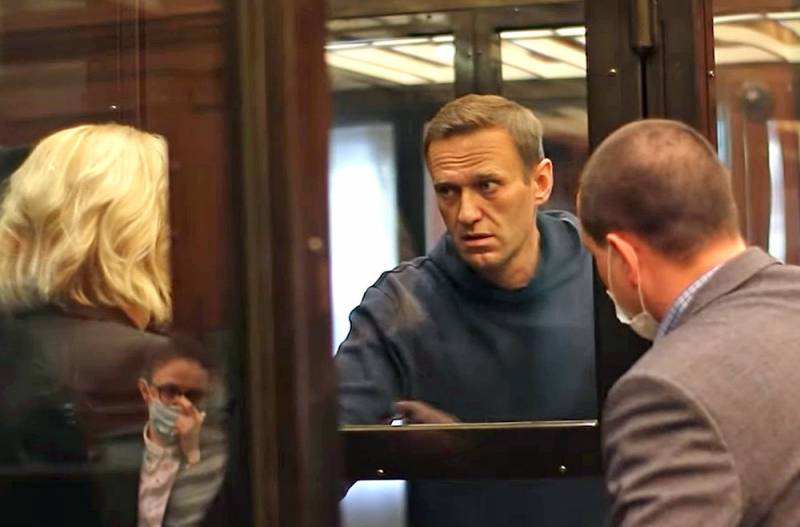 In truth, not everyone believed that this would actually happen. Even after the far from triumphant "return of the resident" to his native land according to passport data, which ended by far from a pleasure trip to the pre-trial detention center. To scare a little - so that the "dizziness of success" inspired by European hospitality passes - this is one thing. To measure the real time, albeit fully deserved, at least according to the letter of the Law, knowing perfectly well what kind of storm will follow immediately after that is quite another.


For too long, the top leadership of our country has lived with a cautious glance at the West and, in order not to aggravate with it, “let go of the brakes” things to which it would be worth reacting much more sharply. Including and "threatened with a finger" to those persons who openly declared their intentions to arrange a "revolution" in Russia, and in fact - to seize power in an unconstitutional way. Why did they decide to act as tough as possible with regard to Navalny? How justified are such actions and what kind of "long-range sight" can there be? Let's try to figure it out.

The end of the world did not come. But it will be fun ...

Before delving into the topic we are discussing, I would like to ask a few simple questions. Tell us what feelings do you personally experience when you see in the media reports about how various foreign figures, from leaders of states to "small fry" of the level of clerks in all kinds of "international organizations" or bureaucratic offices, allow themselves to "demand" something from Russia, threaten her? When all this, excuse me, the pack undertakes to accuse the state of which you are a citizen of not following their "valuable instructions", solving its own purely internal issues? When do they try to throw mud at the leader of your country, reaching the point of direct insults? Oh, you did not vote for Putin ... However, whatever one may say, he is the legitimate head of state in which you live. And the US Secretary of State, who is acting like a fool about the "rampant corruption" he saw in his YouTube videos, is rude not only to Vladimir Vladimirovich personally, but to the whole of Russia ...

The events around Navalny highlighted with the final clarity the attitude that the West is trying to show to the country, which has one of the largest territories on the planet, one of the strongest armies in the world, warming all of Europe with its energy resources and feeding a large part of the world's inhabitants. We haven't owed them anything for a long time! The loans were repaid, the debts were paid, the contracts were fulfilled. So on what basis, “the world community is trying again and again to talk to our Motherland like a teacher with a careless first-grader ?! As soon as the Simonovsky Court of Moscow replaced repeatedly, grossly and cynically violating the rules of serving a conditional sentence, citizen Navalny, this most unobtrusive conditional "term" for quite real 2.8 years in a general regime colony - and hell opened up. "Sincere indignation", "deep concern" and "strong condemnation" sounded from all the irons of the planet ...

In the forefront of the indignant, of course, is the United States. Their new Secretary of State, Anthony Blinken, did more than just call Russia's actions "deeply, deeply disturbing." This figure, who has not yet had time to get used to the new chair, is already categorically demanding the release of Navalny and every single one of those who have been buzzing on the streets in recent years will be "piled up", and "immediately and unconditionally." Direct surrender of some kind turns out ... In addition, he promises to "bring to justice" our country for "inability to observe the rights of its citizens." Excuse me, Mr. Blinken, but nothing that we are talking about the citizens of Russia, not the United States ?! American lawmakers are already in business - the US Senate is right now working tirelessly on a law on new anti-Russian sanctions - "for Navalny." If anything, that's what Republican Senator Mitt Romney says. The Old World is also trying to keep up.

Head of the European Foreign Office and policy security, Josep Borel, not limiting himself to routine attacks against our country, began to give legal assessments of the actions of the Russian court, calling his sentence "contrary to the country's international obligations in the field of the rule of law and fundamental freedoms," and, most importantly, the sentence of the European Court of Human Rights, which , you see, declared Navalny's brothers-in-law clean, like lambs, sufferers, and not trivial swindlers, which they really are. Learn the materiel, Monsieur Borel! I mean, read the amendments to the Constitution of the country that you undertake to teach. There, about the ECHR and the "binding" of its "never politically motivated" verdicts for Russia, everything is set out in the most detailed way. In the corresponding statement of the European Commission, apparently to enhance the effect, it is indicated that in this way our country, in addition to everything else, "negatively affects the integrity of the entire European system of human rights protection." So we are not rushing into your "system", good gentlemen! You still cannot calm down - we put your "values" at the door, and you strive to squeeze through the window with them.

Is everything planned in advance?

I would like to say about the same to persons of greater caliber - such as French President Emmanuel Macron, who with all the ardor of national temperament began to assert that the deserved sentence is "unacceptable" and broadcast about "non-negotiable respect for democratic human rights to democratic freedom." You, monsieur, have the right to say, it would be better if these loud words were reserved for the “yellow vests” that are regularly beaten by the police with your approval. The Chancellors of Germany and Austria, the British Prime Minister are all about the same. "Release immediately", "end violence against peaceful demonstrators", "ensure that global legal standards are met" ...

It’s interesting, but where was all this intensity of your “righteous anger” when not so long ago they fired point-blank at the “sightseers” in the Capitol and introduced martial law in Washington? The answer, of course, will not follow. The West so naturally and comfortably feels itself in the coordinate system of the double standards it has set itself that it does not even think to ask the question: “Why is it possible to water, gas and treat demonstrators with batons in Germany, Belgium, France or the United States, but to restore order in Russia ( by the way, much less severe methods) - in no case? " So they will continue to repeat, as established, about "trampled freedoms", "violated principles" and similar senseless rubbish, which for a long time has been nothing more than a set of loud, meaningless phrases in their own countries. Sanctions? Yes, most likely they will. Again, someone will be declared banned, promised to "freeze" someone's assets, and so on. Maybe this time they will go further. However, one gets the impression that the Kremlin gave a legal course to the "Navalny case" not only with absolutely certain foresight of such a turn of events, but precisely counting on it.

Moreover, many of those who seriously analyze the situation are haunted by one extremely strange detail. Namely, an official appeal will be "piled up" from the FBK to the White House with a demand to impose more sanctions against Russia, made with great fanfare just on the eve of the fateful trial for their "leader" and the "mass protests" planned for the same day. At the same time, the bourgeois from Washington, of course, supported the bad boys who took the initiative, but somehow so far more in words. No, they probably promised a hefty barrel of jam with a basket of cookies ... But the point in this case is that, having made such a demarche, the domestic adherents of Navalnism not only confirmed all the accusations put forward by the Kremlin against them, but, one might say, solemnly under them signed. “Yes, we work for the overseas gentlemen and dream with their help and with their support to inflict maximum harm on Russia the sooner the better!” - somehow it turns out that way, or am I wrong?

In order to break off such numbers, you need to be either extremely alternatively gifted individuals with a completely distorted perception of reality (“Now Biden and Blinken will get a call to Putin - he will immediately get scared and Lech will be released immediately!”), Or ... Or be nothing “Fighters against the regime,” but obedient executors of its instructions. No, what's the bad version? Having pleased after arriving home like chickens in a pluck, Navalny is forced to conclude a deal in which his protest movement is completely discredited in the eyes of the Russians, and he himself, having received the minimum term, is released as soon as possible "for good behavior." In any case, the “protests” that took place on the eve of the trial, over the weekend, clearly demonstrated that “hundreds” of thousands of compatriots who are ready to go to bed for the release of the “beacon of democracy” exist only in the wild imagination of editors of Western media. The rallies in support of Navalny are declining with such intensity that it is clear to anyone that even the most overwhelming "Maidan" cannot be concocted out of them.

It is extremely doubtful that the “beacon of national democracy” in the uncomfortable camp barracks would be so warmed by the “warm support of the world community”. What practical and extremely mercantile actors like him do best is to negotiate with those who make the best offer. So it could well "go for cooperation." Another question is why the Kremlin needs it? There is only one answer - they decided to finally and decisively "dissociate" from the West on some key issues. Indeed, why try to establish some kind of relationship, return to PACE, and most importantly, start any new joint economic projects until these gentlemen get it, that it is completely useless to put pressure on Russia? Better to sort things out once and if not forever, then for a long time, while trying to establish new "rules of the game." Are they angry? Will they be sanctioned? Isolation? And we, excuse me, in what conditions are we now? Will be worse? This is very unlikely. All "horror stories" like disconnecting from SWIFT and other radical measures look somehow unconvincing against the background of the current harsh winter. Europe will definitely not want to freeze itself for the sake of Navalny's freedom.

For a long time, our country, following the absurd demands of the West, showed its own weakness. Now, when, in response to the flurry of emotions, threats and "categorical demands" from the Russian Foreign Ministry, only a rather frank advice sounded not to pry into other people's business, everything is exactly the opposite. That's great. Let them get used to it.
Ctrl Enter
Noticed oshЫbku Highlight text and press. Ctrl + Enter
We are
"We must beat first": the geopolitical alignment around Russia is continuously deteriorating
Ten "defeats" of Putin
Reporterin Yandex News
Read Reporterin Google News
24 comments
Information
Dear reader, to leave comments on the publication, you must sign in.