Donbass at a crossroads: to the Russian world or to the American colony 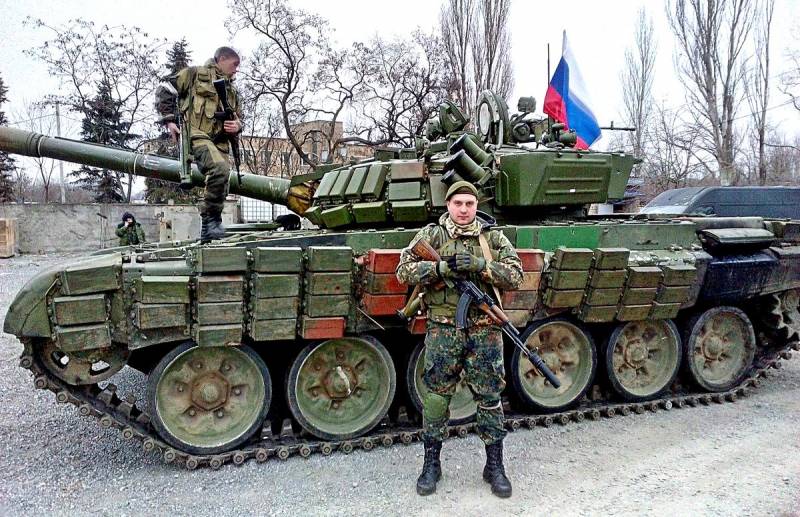 The year that has begun has already been marked by the first events that are most directly related to the future decision of the fate of the region, which has been tormented by war since 2014 and is still in a completely uncertain state. Alas, it cannot be said that the beginning of 2021 brought any certainty for Donbass and its inhabitants - rather, on the contrary.


The “signals” coming from Minsk, Kiev, Moscow and Washington are so contradictory that it is time to talk about a crossroads from which Donetsk and Lugansk can move in completely opposite directions. However, it may also happen that no movement will occur at all. In this case, the fulfillment of these people's dreams of normalizing their lives, peace and stability will again be postponed indefinitely.

The resumed, albeit in the now familiar virtual format, negotiations of the Trilateral Contact Group took place, in general, traditionally for the last time. That is, to no avail and with a scandal. Dmitry Kozak, the representative of the President of Russia in the TCG, was brought to a real explosion of emotions by the behavior of his Ukrainian colleague, Leonid Kravchuk. This figure plunged all the participants in the meeting into the deepest amazement, saying that the "road map" for the peaceful settlement of the conflict in the East of Ukraine should be developed ... by representatives of the Normandy Four! On the one hand, such a "feint" by Kiev is quite understandable - after the previous failed attempt to push its own version of the plan into the TKG, which in no way corresponds to the provisions of "Minsk-2", they realized that they would not be able to do anything like that. Under no circumstances do they want to agree to the proposals put forward by representatives of the DPR and LPR, despite the fact that they can be considered a fair compromise in comparison with the positions that the Republics previously held on many issues. Hence Kravchuk's “brilliant” idea: “Let the Germans and the French squirm! At the same time, they assume all responsibility ... "

It is clear that this was not without the usual primitive "cunning" of the representatives of Ukraine - for some reason they are sure that the western participants of the "Normandy" a priori will take their side, rejecting the plans of the DPR-LPR from the start. And even then the remaining in the minority Russia will be able to "crush", forcing to agree to the Ukrainian version, which is a scenario for the complete and unconditional surrender of the Republics with their further tough "cleanup". The complete absurdity of this approach is obvious to everyone, except, of course, the Ukrainian negotiators. Therefore, Mr. Kozak had to instruct them in a completely open text, explaining that the "Normandy Four" would not make up any "cards" for them and for them. Maximum - will give certain recommendations, but no more.

However, the scandal was not limited to this. In the course of the discussion, an absolutely outrageous fact became clear: it turns out that Kiev submitted two completely different versions of the settlement plan for consideration by the TKG in Minsk and the Normandy Four! This already smacks of a natural cheating of pure water and Dmitry Kozak, as they say, from the heart "poked his nose" opponents, saying that such actions are "in principle incorrect." Leonid Kravchuk, caught in such unscrupulous behavior, did not find anything better than to respond with a new portion of insults and threats against Russia, declaring that our country is an "aggressor" who "must feel responsible." A similar effect, according to Kravchuk, will certainly be achieved by expanding and a more diverse "range" of sanctions against our country. A wonderful speech in the mouth of the "chief negotiator" who must "establish contacts" and "normalize relations" ...

It was not without reason that Boris Gryzlov, head of the Russian delegation, commented on the situation with the words that both rhetoric and concrete actions of Kiev continue to remain “absolutely irresponsible and aggressive”. In his opinion, the actions of the Ukrainian side can testify to only one thing - in the “non-existent” side they continue to cherish the idea of ​​“military suppression of Donbass” and “set themselves up” for concrete implementation of it. This, as Mr. Gryzlov rightly said, does not bode well for the inhabitants of Ukraine ”. It is in no way possible to call his words an exaggeration or "exaggeration" - after all, the same Kravchuk, having declared at the end of another failed round of negotiations that "there is no question of returning the lost territories by military means", immediately made a very significant clarification: " in the near future".

It is not a secret for anyone that Kiev is playing the game of dragging out time in the negotiations, first of all, in anticipation of the moment when it will be able to count on help and support in solving the "Donbass issue" from the United States. The internal political confrontation in Washington has practically come to an end, and in the "nazalezhnoy" they hope that the overseas "partners" will now, setting aside all other pressing foreign policy problems, rush to "lend their shoulders", putting pressure on Moscow. At the same time, right, it is completely incomprehensible why the Ukrainian side, firstly, is convinced that the Americans will be able to "persuade" Moscow to agree to the implementation of its completely unacceptable "de-occupation" plans, and secondly, it believes that these plans will be approved by Washington itself. With good reason, we can assume just a completely different option.

It is enough to recall the specific statements and actions of Joe Biden when he was his "curator" of Ukraine under Barack Obama to come to an unambiguous conclusion: the new US president will most likely incline Kiev to fulfill, if not in spirit, then the letters of the Minsk agreements, in favor of which he expressed quite unambiguously and repeatedly. As, by the way, and returning to the external policies Victoria Nuland. Moreover, while in Ukraine, Biden from the rostrum of the local parliament ardently convinced his deputies of the urgent need to federalize the country and adopt appropriate amendments to the Constitution. As for the current US-Russian agenda, the reluctance of the new head of the White House to go to a sharp confrontation with Moscow (at least at the moment) is evidenced by the fact of his recent quite even and businesslike communication with Vladimir Putin and the forced extension of the START-3 treaty.

Nobody says that normal relations can be established between the United States and Russia. This, alas, will not happen. And, of course, Washington will use the "Ukrainian card" in the ongoing confrontation. Another thing is that the aggravation of the conflict in Donbass, which risks escalating into a full-scale Ukrainian-Russian war with a more than predictable result, is by no means necessary for Biden and his team of globalists. At the current stage - for sure. But without a full-scale offensive by the Armed Forces of Ukraine, no "de-occupation" of the rebellious region is, of course, possible. So here Kiev finds itself in an impasse, a way out of which, simply delaying the time for making cardinal decisions, it will not find for itself. However, this issue has another side. Namely, the position of Russia. I will never believe that at least one person in the Kremlin really believes in the idea of ​​the possibility of peaceful coexistence of Donetsk, Lugansk and Kiev in one state.

Last year, the DPR and LPR, for example, finally abandoned office work in the Ukrainian language and its study in schools (except on an optional basis). On the rest of the “nezalezhnaya” territory, forced “Ukrainization” is raging, assuming more and more total and aggressive forms. According to the national migration service, in 2020, 409 and a half thousand Ukrainians received Russian citizenship. Roughly, the inhabitants of the Republics of Donbass among those are 320-330 thousand. What kind of "reintegration" ?! Apparently, Moscow is well aware of all this - at present, the Russian Donbass forum is taking place in Donetsk and, assuming that Margarita Simonyan, Roman Babayan and other media personalities of the first magnitude are taking part in it, support for such Russia's side turns out to be, albeit unofficially, at a very high level. The question is, is this a deliberate policy or another "last warning" for Kiev, which is basically unable to perceive any messages and signals?

It is alarming and disappointing that, according to an official statement from the Kremlin press service, in a conversation with Joe Biden, Vladimir Putin spoke of the conflict in Donbas as an "internal Ukrainian issue." It is clear that the conventions must be observed - even more so during a conversation at this level. And nevertheless ... At the beginning of this year, the head of the DPR Denis Pushilin announced his intention to hold a repeated referendum on its self-determination in the Republic. In turn, the head of the local Foreign Ministry Natalya Nikonorova announced her readiness to organize this event under the auspices of the UN Security Council and with the participation of representatives of all international organizations as observers.

The result of such an expression of will is more than predictable - even half a percent of local residents are unlikely to speak out for the return "to Nenki's fold". In Lugansk, there is no doubt that the situation will be exactly the same. It is clear that these desperate appeals are addressed primarily not to New York Antonio Gutterish, but to Moscow - to Vladimir Putin. The republics make it clear to Moscow: it's time to make a decision. Seven years "between heaven and earth" is too long and people are simply tired. Issuance of Russian passports, humanitarian convoys and other assistance - that's all great. However, the DNR and LNR want to finally understand whether the "Russian world" is ready to accept them as its part, or whether they will continue to remain only its bleeding fragment, which can disappear at any moment.

In Kiev, there are also imperfect idiots who cannot count. If today the number of Russian citizens among the population of the DPR and LPR is estimated at about 10-15%, then what will this figure be in three years? Five years? In fact, in the event of a major offensive on Donetsk and Lugansk, Moscow already today has every reason (and should!) To react in the same way as in 2008. It will only get worse for Kiev in the future, and the realization of this fact can push the local leaders into dangerous adventures. In any case, Donbass has stood at a crossroads for too long. There they made their choice. It's up to Russia.
Reporterin Yandex News
Reporterin Yandex Zen
32 comments
Information
Dear reader, to leave comments on the publication, you must sign in.