What signal sent Russia "Donald Cook" from the Black Sea 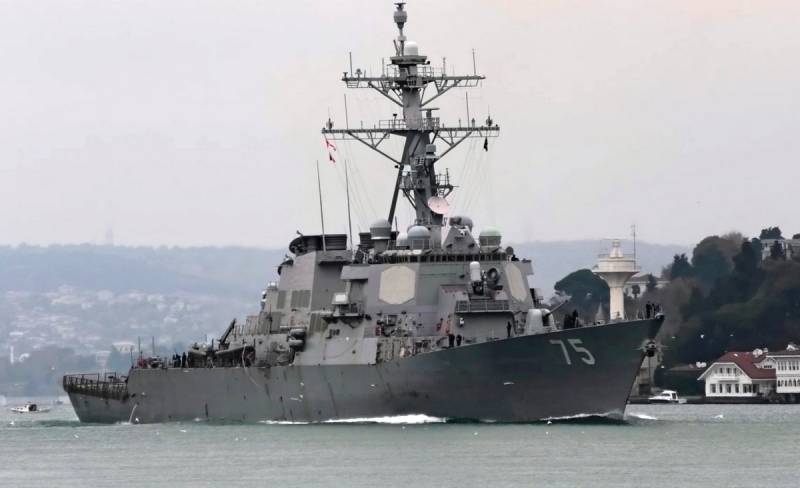 I would like to object to some enlightened comrades who are convincing us that the arrival of the new American administration is a marker for a warming of our relations with America, they say, Biden and START III (the Treaty on the Reduction and Limitation of Strategic Offensive Arms, which expires on February 5, 2021) will be prolonged, and in DON (the Open Skies Treaty, from which Trump left in November last year, and we followed him) will return, and SP-2 will allow us to finish building, and generally revive our bilateral relations, which have dropped below the level of the plinth (by the way, through the efforts, by no means, of Trump, but of his pro-democratic entourage).


START III, Biden may be prolonging (he will probably even prolong it, consultations on this topic are already underway), and maybe he will return to DON (not the fact that we will return there!), But about SP-2 and I have very big doubts about the warming of our relations. Judging by the appointments to key posts in the administration of the 46th President of America, nothing good will shine for us in these matters. And the activation of NATO along the entire perimeter of our borders, and the drawing into it of new members (Ukraine and Georgia), and the flights of American nuclear strategists along our Crimean shores - Biden will not give up all this. This trend in policy He intends to keep Trump.

An additional confirmation of this was the next visit of our old friend of the US Navy destroyer "Donald Cook" (according to NATO classification USS Donald Cook DDG-75), assigned to the 60th squadron of the US Fleet Command, to our Black Sea shores. The 60th Squadron of the United States Navy is one of three squadrons permanently based outside the continental United States, the 60th is specifically assigned to the 6th US Navy, stationed in the Mediterranean. "Donald Cook" is a 4th generation US Navy destroyer destroyer, the main weapon of which is guided missiles (URO - guided missile weapons). The main weapon of the Cook is the Tomahawk cruise missiles with a range of up to 2500 km, capable of carrying nuclear warheads. In the usual version, the destroyer is equipped with 56 such missiles; in the strike version, 96 such missiles are expected to be deployed.

This is not the first time that "Cook" has been hanging around our borders. One legend is connected with him, which says that during his visit to our Black Sea shores in April 2014, he was attacked by our front-line bomber Su-24, which did not carry a bomb load, but had one container under the fuselage with the Khibiny electronic warfare system. with which he turned off the entire mythical BIUS "Aegis" "Cook" (a combat information and control system that connects the ship's warning devices with the system of its weapons of destruction into a single system), which completely blinded and stunned the uninvited guest, after which the Russian pilot simulated a missile attack on a defenseless American destroyer. And so 12 times in a row! As a result, the Americans were forced to retire to the Romanian port of Constanta, where 27 sailors, unable to control their nerves, hastily submitted their resignation. In this legendary story, everything turned out to be untrue, starting with the "missile attack" and ending with the resignation reports, except for the fact that the Su-24 flew an American destroyer. By definition, the Su-24 could not turn off the enemy's BIUS by its own means of electronic warfare, rather it was the Americans with their electronic warfare forces that could blind our pilot. Imagine for a second the power of the destroyer's electronic warfare and compare them with the power of our aircraft's electronic warfare. It's like trying to blind an anti-aircraft searchlight with a flashlight. The effect will be the same.

Up the stairs to the underworld

But back to our old friend. Now he again came to our shores, using the Montreux Convention of 1936, which allows warships of the non-Black Sea powers to stay in the Black Sea for no more than 21 days. It would seem, what can surprise us here? But the Americans did it.

I quote from TASS:

The American tanker Laramie entered the Black Sea to provide fuel to the US Navy guided missile destroyer Donald Cook with fuel. This is stated in a message posted on Sunday on the website of the US 6th Fleet. Laramie's arrival in the Black Sea will help bring stability to the region. Laramie's refueling capabilities will help destroyer Donald Cook continue to carry out operations without entering port. It will also allow NATO partners to refuel [their ships] and extend patrol periods.
Strictly speaking, there is nothing unusual in supplying US Navy warships directly at sea, including refueling them with fuel. For a fleet operating on the scale of all the oceans of the planet, often far from its coastal bases, or in the immediate vicinity of an unfriendly coast, such a method of rear support is very often the only possible one. However, the Black Sea in this sense has never been an area of ​​special activity for US Navy supply ships and, in particular, tankers. The explanation for this is quite obvious. On the shores of the water area, there are quite a few states vassal to America, in the ports of which American "carriers of democracy" can always come with a "friendly visit" and replenish any supplies they need.

But then why was such a demonstration of the ability of American "Moremans" necessary to refuel the ship directly at sea, which no one doubted anyway? Moreover, with its extensive media coverage. I think that there is nothing accidental in this. The activity of the US Navy, in principle, is one of the sure indicators of the degree of toughness of the military-political course of Washington, which, with the advent of the new administration, has not diminished at all. And it is no coincidence that immediately after the inauguration of the new president, the Pentagon made an unprecedentedly tough statement about the readiness of the American fleet, together with the Japanese, to "defend against Chinese aggression" the disputed Senkaku Islands in the East China Sea. And at the same time in the Black Sea, the legendary, in the sense of regular participation in anti-Russian actions, the destroyer "Donald Cook" started exercises with refueling at sea, which were almost equally unprecedented for this water area.

The Americans, who, as they say, ate a dog on various naval provocations off foreign shores, do nothing for nothing. And in this case we have before us a clear signal directed to a very specific addressee. The meaning of this signal is also quite obvious, and for greater reliability it was even duplicated textually: refueling directly at sea will allow the ships "to continue performing operations without entering the port." In practice, this means transferring the ship to a higher degree of combat readiness. Staying in the port does not contribute to this in any way. The ship is in standby mode, part of the crew is busy replenishing supplies, the other is chilling with the girls on the shore (or with the boys, now in the USA this is no longer a rarity, even in the navy). And if you want to show a potential enemy that you have decided to significantly increase the degree of readiness of your fleet for an immediate strike, then there is simply no better way than refueling at sea, which almost does not reduce the combat readiness of ships.

Do not forget that American military strategists are diligent students of the notorious Herman Kahn, who half a century ago invented the so-called "conflict escalation ladder", which is still being studied in all US military academies. And on this staircase, where the upper 44th step is called "Chaotic senseless war for total destruction", there are a number of steps that gradually lead to it. Including step number 4, on which "Tightening of positions and strong-willed confrontation" takes place. It is to this stage that the apparent increase in the combat readiness of the American fleet, which is indicated today on the Black Sea by a rendezvous of an American missile destroyer with a supply tanker, is not quite usual for this water area.

Of course, it would be wrong to think that this “signal” will be the only thing. In recent days, the number of the most diverse and clearly unfriendly "messages" that Washington sends to Moscow has been growing rapidly. And this growth by no means coincided in time with another attempt to storm the Russian authorities, undertaken, at the behest of the same “Washington Regional Committee,” by the local “fifth column” (I mean the action of “Navalny's children”). At the same time, the Americans are clearly counting on the fact that the addressee of these signals, which is undoubtedly the Russian government, will understand them “correctly” and draw “appropriate”, that is, the conclusions pleasing to the United States.

But just with this, our overseas strategists can have the biggest misfire. Judging by the direction in which events are developing in the Russian Federation, and how quickly the Kremlin's line towards Western interference in Russian affairs is tightening, the American authorities may not be upset in a childish way. Because today's Russia is already so tired of their shameless rudeness that even the rupture of diplomatic relations with this completely insolent "Empire of Good" is already seriously discussed in the Moscow media. When they talk about it in the Kremlin corridors, it will be too late to drink Borjomi. By the way, this is already the 10th step on the escalation ladder of Herman Kahn. And his diligent transatlantic students should, finally, count - how many such steps they still have left before they see the underworld. Because, according to Vladimir Putin, they will no longer be able to get to heaven.
Reporterin Yandex News
Reporterin Yandex Zen
84 comments
Information
Dear reader, to leave comments on the publication, you must sign in.