Between Munich and Davos: Putin is tired of warning the West 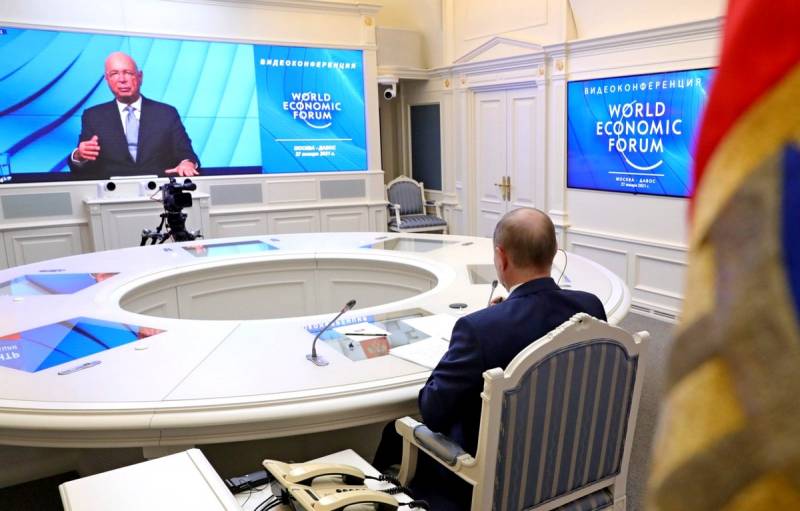 The speech of the President of Russia, after a rather long break (11 years), took part in the World Economic Forum in Davos, albeit held in the format of a video conference, as expected, became the subject of the most close attention and deep analysis. It has already been “disassembled” by phrase, by word, and is hotly discussed both abroad and in our country.


At the same time, some domestic experts express a certain disappointment: they say, this speech was neither a continuation of the famous Munich 2007, nor any new version of it. However, such an opinion, perhaps, is expressed only by those who did not delve deeply enough into the meaning of the words of the head of our state, and most importantly, failed to compare them with the specific geopolitical context of today.

Russia-West: from hopes to skepticism

First of all, it should be noted that everything that Vladimir Vladimirovich said the day before within the framework of the Davos Forum serves as a continuation of his speech at the Munich conference on international security, which excited the whole world. Below we will talk about this, touching on specific topics. In the meantime, let's dwell on the fact that if his current speech were more or less a complete repetition of what was said 13 years ago, it would be at least strange. It is hardly possible to deny that during this rather long period, filled, moreover, with a mass of various events, our domestic leader, like every person, has changed. And the world around us has undergone a significant transformation, and, alas, for the most part, not for the better. If Putin continued to repeat all the same things as before, it would look completely frivolous - today the revelations so stunned in 2007 by our "sworn friends" about Russia's intentions to turn its own sovereignty and the right to an independent foreign policies from declarations into reality would sound rather comical. Something like the familiar anecdotal "The Ministry of Health warns for the last time ..."

The time for Russia to designate its own position and status, to voice its well-founded claims to return to the role of a world power has long passed. In fact, in Munich, Putin simply openly stated that Moscow would no longer dutifully follow in the wake of the West's globalist agenda, while trampling on its own interests and dignity. He was not heard. Rather, they found in his speech exactly what they wanted: “aggressive aspirations”, “exorbitant claims”, “a desire to scare the West and force it to make concessions” ... At the same time, as usual, they decided that everything that was said was just empty the words.

Well, after that there were already Tskhinvali, Crimea, Karabakh and many other things, including the launches of hypersonic missiles, proving that the then words of the president were not a "bluff". What's the point now, when NATO is trying to drag Georgia and Ukraine into it, repeating the 2007 claims about the treachery of the North Atlantic Alliance, which promised "not to expand to the East"? Or again to talk about "the maximum advancement of his forces to the borders of Russia"? Then they did not hear, and now they will ignore it. But as for the thesis expressed by Putin in Munich about "the unacceptability and impossibility of a unipolar world", it is in his Davos speech that he draws a line under this topic, declaring that, in fact, "there has never been any unipolar world." There was only an attempt to create it, and even that, according to the president, "has already ended." For those who do not quite understand, with these words Vladimir Vladimirovich is not something that "takes out of the brackets" all of Washington's claims to the role of "world hegemon." They nullify them. Absolutely concretely denies them the right to exist. In Munich, he complained about attempts to "impose the American system on other states."

Now he proclaims (and repeatedly throughout his speech) the actual collapse of this very system, repeatedly pointing out its complete failure. Let's face it, he pours salt on his wounds and does not spare his pride, mentioning the political mess that has recently taken place in the United States and talking about the flawedness of their built on financial "bubbles" economics... At the same time, the process of degradation of humanity, hundreds of millions of young representatives of which today have neither work nor education, Putin directly calls the disastrous consequence of the "Washington Consensus". In fact, most of the Davos speech is a very thorough admission of dislike for overseas "friends" ...

All this sounds especially significant in light of the fact that just before his speech at the forum, Vladimir Putin held his first telephone talks with the new US President Joe Biden. Tellingly, each of the parties ultimately presented its official version of the conversation, and they differed from one another very radically. The Kremlin mentioned the main thing - reaching a consensus on the extension of the START-3 treaty and "considering the prospects for cooperation in the fight against the coronavirus pandemic," the rest fit into a short wording: "discussion of topical issues on the international and bilateral agenda." Among other things, which very, very clearly expresses the position of Moscow, the "internal Ukrainian settlement" is mentioned in passing. This is not the wording of White House press secretary Jen Psaki, who claimed that Biden called Putin primarily to "strongly express support for Ukraine's sovereignty in the face of ongoing Russian aggression." And also - to make a strict suggestion about Navalny ...

Ultimately, one gets the impression that we are talking either about two different conversations, or on both sides of the ocean, the communication of the presidents and Russian-American relations as such are interpreted diametrically differently. The point, of course, is the second. Biden - Biden, and Anthony Blinken, who replaced Mike Pompeo as head of the US State Department, has already managed to say enough in a very short time so that no one has any illusions about the future course of Washington. The same Navalny, this figure pompously called "the voice of many Russians, which cannot be drowned out." And in general, according to the Secretary of State, the White House intends in the near future to "review and analyze all the malicious actions of Russia." Naturally, first of all, “in order to develop appropriate response measures”. Blinken has already announced sanctions for placing a "prominent oppositionist" on the bunk.

Another “echo of Munich” in Putin’s Davos speech is the mention of the complete “degradation of the global collective security system” and the need for either a complete “reset” of the international organizations that are formally responsible for it, or even creation of instead of the current ones, which have turned into fiction, new, efficient and viable structures. In 2007, Vladimir Vladimirovich was still trying to remind the audience that "force in international relations" can be used exclusively on the basis of the provisions of the UN Charter. Now he, like all adequate world leaders, understands perfectly well that the mentioned document is no longer worth the paper it was printed on. In 2007, our president complained about "the transformation of the OSCE into a vulgar instrument of securing the interests of some countries at the expense of others." In this case, what would be worth saying about the current status of another "European institution" - PACE?

This "assembly" has now turned into not just a place for Russophobic sabbaths, but also a platform for those who openly speak out with provocative calls for a coup d'etat in our country! The question arises: is it worth our delegation to continue to participate in such dubious shows after the latest events that happened the day before? During the "debate over the arrest of Navalny," which resulted in a completely ugly obstruction of both Russia and its representatives, the speech of our deputy Leonid Slutsky was simply rudely interrupted by PACE Vice President Nicole Triss, who clearly did not like the principled, clear and well-grounded the position of the speaker. But she did not even think of doing anything like that when the representative of Ukraine Oleksiy Goncharenko from the rostrum of the Assembly appealed to the Russians to “take to the streets” and overthrow “the worst regime of the XNUMXst century”, which “is killing people all over the world”. In my opinion, after such tricks, Russia's participation in PACE should not even be a subject of discussion.

Addressing the participants of the forum in Davos, Vladimir Putin was extremely frank. Having made a reservation that he hoped that "the third world war is impossible in principle", the president could not resist comparing the present day with the alarming and pre-stormy 30s of the twentieth century. He directly pointed out that "attempts by some countries to resolve their own internal contradictions by turning into enemies of others" will inevitably lead to the emergence of armed conflicts. At the same time, so that no one had any doubts about what exactly he was talking about, the President made a clear reservation that today the West has chosen Russia as such a bogey "external threat". According to Putin, the "spiraling" international contradictions could ultimately plunge the world into ultimate chaos and nightmare. Speaking of a "disruption in world development" and a war "of all against all", our leader does not mean a banal clash of several states or even military blocs. It is, in fact, about the Apocalypse, and not necessarily nuclear ...

The main thing, in my opinion, is the impression left by the speech in Davos - Putin is tired of warning the West. It seems that he no longer really hopes to shout out, to reach out to those leaders in the "world community" who are able to soberly assess the situation and make adequate decisions. It is very possible that Vladimir Vladimirovich the further, the more he doubts the presence of those, at least in key positions. The Russian president is trying to say the right, unifying and inspiring things. What else would you order him to do? After all, he is the leader of a world power, the position obliges. However, the main difference between the speeches in Munich and Davos, alas, is that the first was delivered with hope, and the second with bitter disappointment. However, the main thing is that both of them sounded from the lips of a leader who really looks at things and does not intend to retreat from the chosen path.
Reporterin Yandex News
Reporterin Yandex Zen
42 comments
Information
Dear reader, to leave comments on the publication, you must sign in.