The flaming Kremlin and the army in Moscow: how they lied on the day of the all-Russian rally 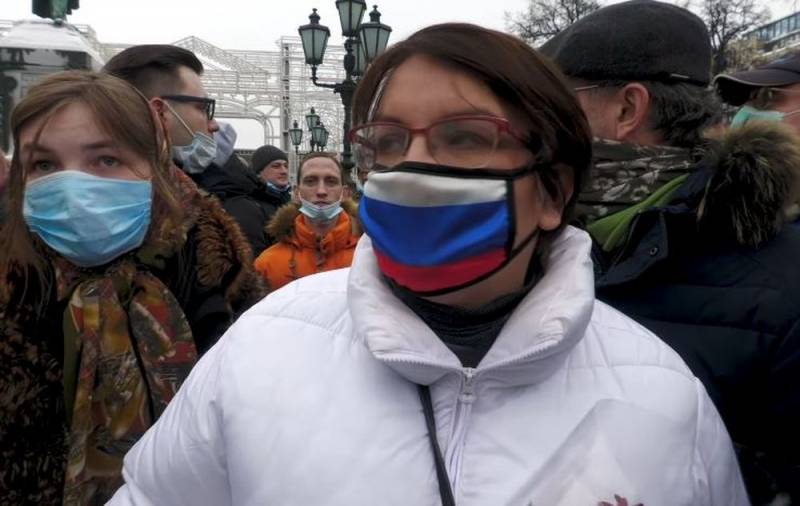 Deputies of the State Duma of the Russian Federation from the Committee on Information policy examined publications from the Web devoted to uncoordinated mass actions on January 23, 2021, for the detection of false information, fake News or simply fakes. As a result, 53 messages with false information were identified, the data on which were sent to the Prosecutor General's Office and Roskomnadzor for proper response.


It should be noted that the bulk of the fakes were posted in the service for creating and viewing short videos "TikTok". We present to your attention the top 10, how the opposition lied on the day of the announced so-called all-Russian rally.

In the first place is a fake calling to "take care of yourself", since "the police were allowed to shoot at the protesters." For plausibility, even the bill on expanding the powers of law enforcement officers, adopted in the first reading by the State Duma in December 2020, was mentioned. 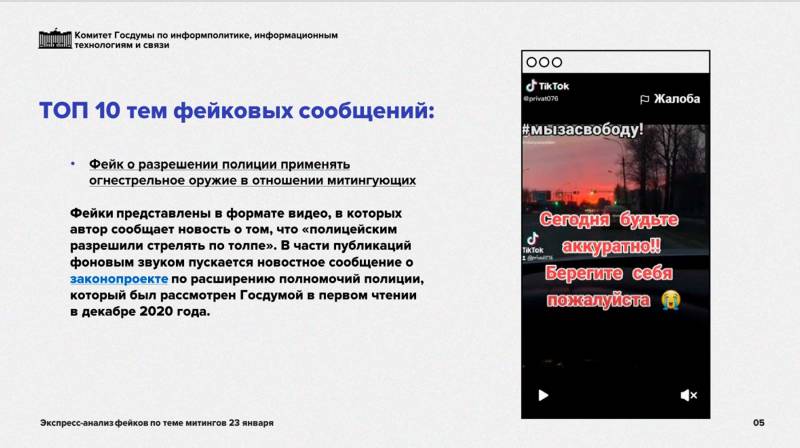 The second place, no doubt, deserves the "news" about the widespread disconnection of the Internet by the authorities in the Russian Federation on the day of the action. And for some reason, the publishers themselves did not complain about the lack of the Internet. 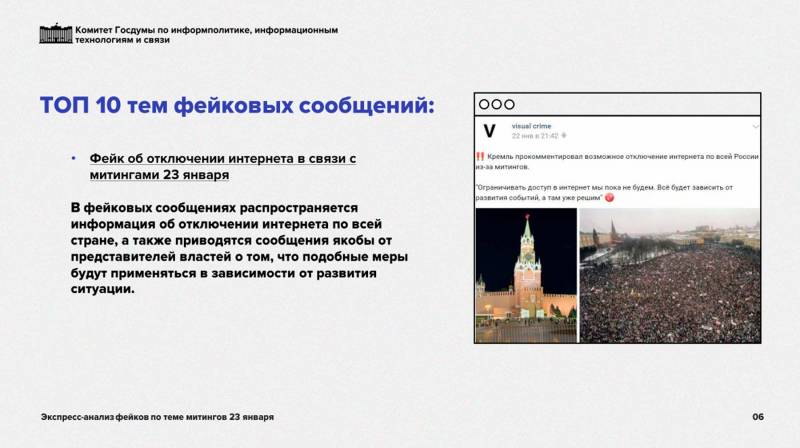 In third place is the fake in which Russian leader Vladimir Putin came out to talk to the protesters on January 23. 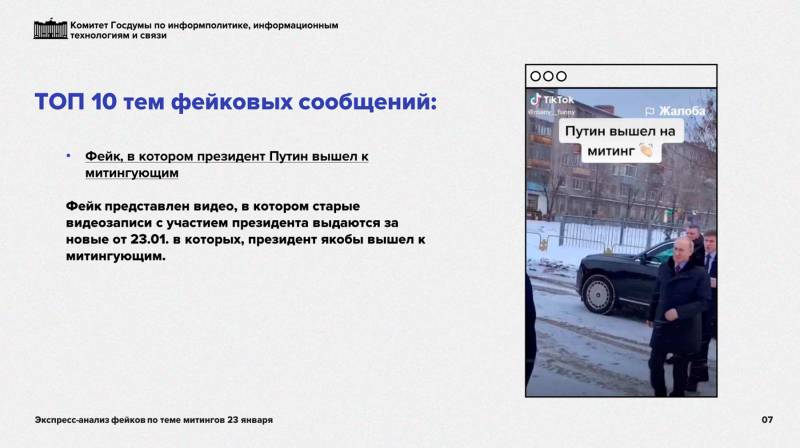 The fourth place was given to the most common fake, made in the form of a cut of many photos and videos from protest actions of the past years, or in general from other states, which were issued on January 23rd.

In fifth place is the "news" about the "death" of the protester. The opposition said goodbye to the "brutally murdered" Ukrainian streamer Vitaliy Tsal (Papich), attaching his photograph taken in June 2020 after the operation as evidence. 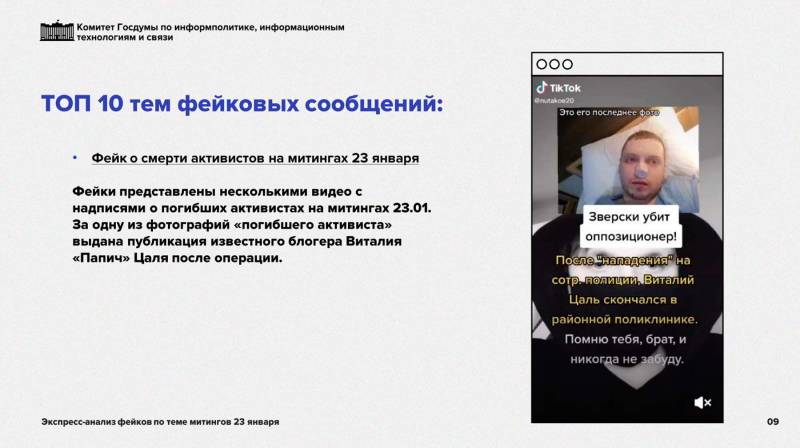 Sixth place went to a fake about a video message from 32-year-old Russian actor Alexander Petrov, who "called for a protest." He was simply cut out of one movie in which he was filmed. 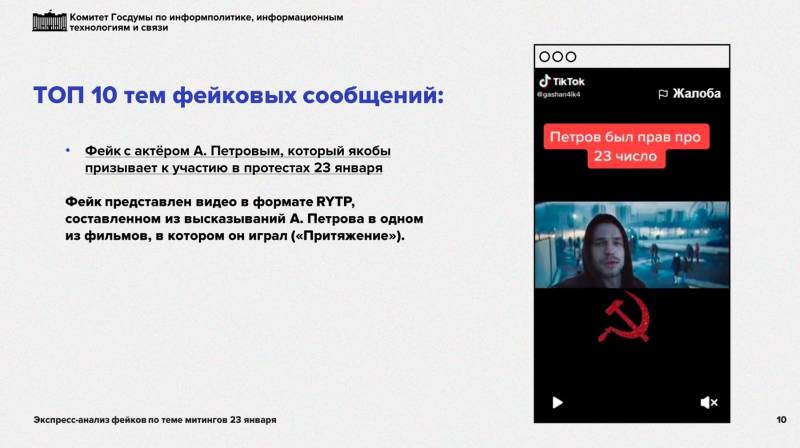 In seventh place was the fake about the Kremlin arson. The video was simply overlaid with visual effects to create the illusion of a fire. 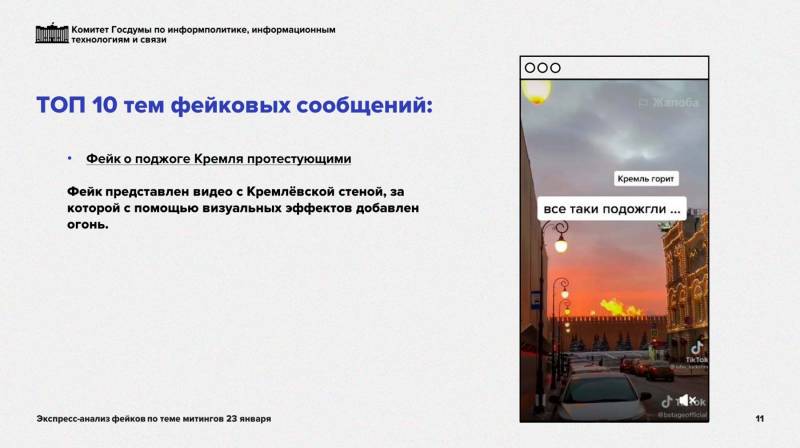 Eighth place went to the fake about "beating a protester by a policeman." In fact, the picture shows a law enforcement officer who provides first aid for an epileptic seizure in one of the activists. 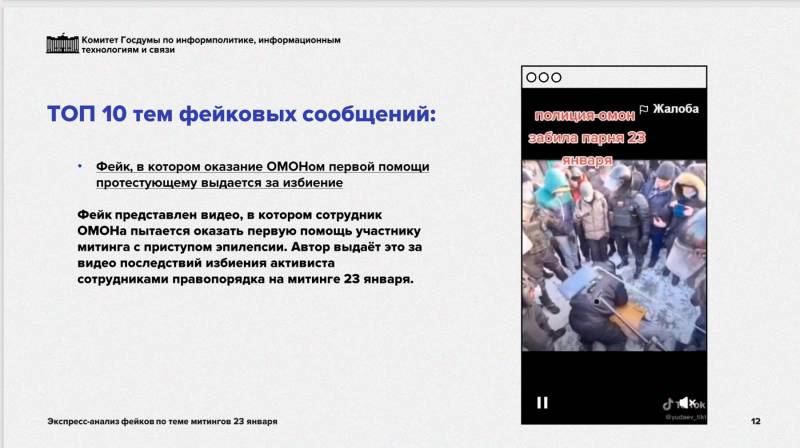 In ninth place is "the use of the army to suppress peaceful actions" in Moscow. Naturally, no one brought any army into the Russian capital. 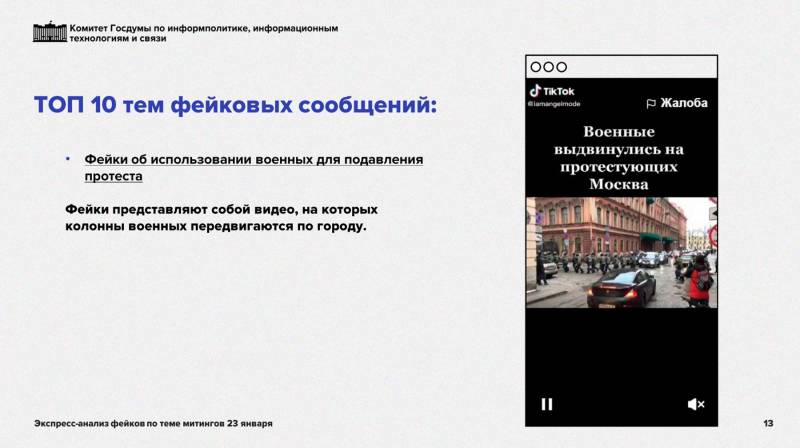 Rounding out the top ten is a fake about "millions" of people who disagree with the authorities throughout Russia. Moreover, according to various estimates, from 4 thousand to 50 thousand people took part in the actions in the multimillion-dollar Moscow, and up to 100 thousand people in Russia as a whole, i.e. in principle, there can be no talk of any "millions". 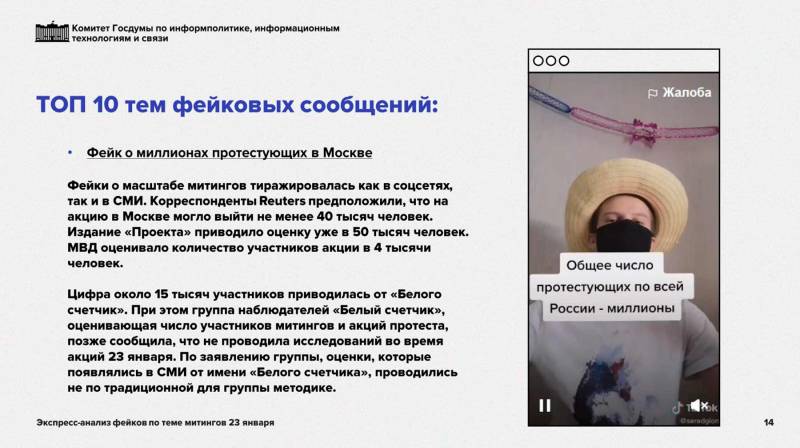