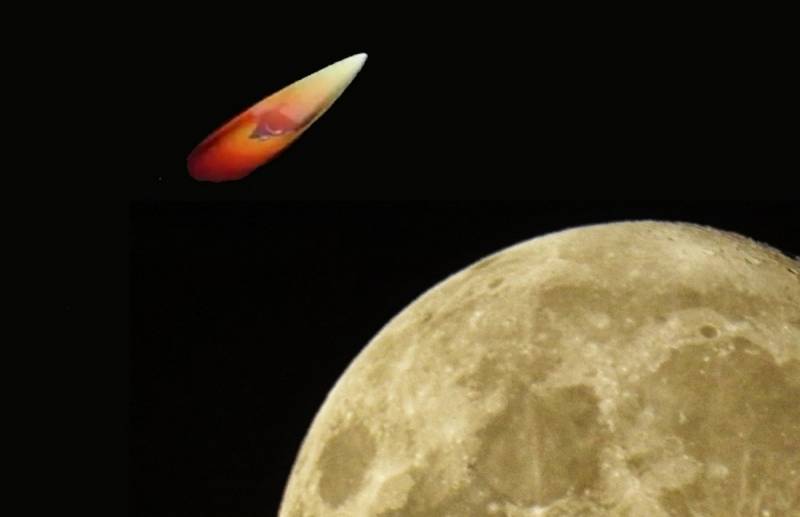 Regular accusations from the United States against competitors about the militarization of outer space have been heard for two years now, at about the same frequency with which earlier accusations were made about the Treaty on Short-Range and Medium-Range Missiles (INF Treaty). Washington's motives are quite transparent. The shortest history of the United States' compliance with its international obligations looks something like this.


SDI was officially closed in 1993. Almost the same program of space lasers continues to this day. At the same time, already in 1998, a noteworthy Air Force document appeared - "Space Operations". In 2005, a completely "offensive" military space strategy was adopted.

Even aside from the ABM efforts, the documents did not diverge from the deeds. In 1999, the development of the X-37V mini-shuttle began. In 2005, two American satellites-inspectors under the MITEx A program were launched into orbit. In 2009, the USA-207 maneuvering electronic reconnaissance aircraft was launched. In 2014-16. four under the GSSAP program, which "have conducted hundreds of maneuvers since 2014 and close approaches or rendezvous operations with more than a dozen operational satellites in geostationary orbit."

In July 2018, the US defense budget for 2019 was adopted, which officially provided for the creation of a missile defense space echelon. At the same time, the deployment of the sensor component by 2022 should be only the first stage of the program.

On June 17 last year, the new US space doctrine was published. In the document, Moscow and Beijing were accused of creating threats to the US space group. As a response measure, it is supposed to transform space from a "supply" into a full-fledged "combat domain". In other words, we are talking about deploying there - naturally, "for defense purposes" - strike weapons.

At the same time, the concept of a complete prohibition of the placement of weapons in space, promoted by the Russian Federation and China, is met with hostility.

So, while insisting on the deployment of weapons in space, Washington simultaneously accuses Moscow of militarizing them. The situation ideally duplicates the scenario of withdrawal from the INF Treaty, not only in rhetorical terms. The actual "reason" for the cancellation of the latter turned out to be successful tests of the AHW hypersonic warhead. The prelude to the 2018 budget was the successful interception of a full-fledged intercontinental ballistic missile (ICBM) on May 30, 2017.

The nuance is that the orbital is the main echelon of a rationally constructed missile defense system. The ground part of the missile defense is forced to interact with a "complex ballistic target" - a huge set of warheads and decoys themselves, protected by active and passive jamming. This means problems in finding real targets - not to mention the need to shoot down the warheads separately.

The destruction of a missile at an early stage, before the deployment of warheads and the creation of a cloud of decoys is more than an order of magnitude more effective.

However, attempts to move the interceptors to the launch sites in the case of Russia and the PRC are fraught with purely geographical difficulties and create the risk of a completely operational strike on the advanced missile defense infrastructure.

The creation of a space-based system removes this problem. In parallel, the "hypersonic" problem, which served as the official reason for the deployment of the orbital system, is also being largely solved.

In the optimistic version for the owners of missile defense, hypersonic warheads die at the initial stage and on a general basis. On the pessimistic side, such devices will lose one of their key options. Due to their relatively low flight altitude, they are late in the field of view of a ground-based missile defense system, leaving it with little time to react - but this does not matter for space systems.

At the first stage, we can talk about the reincarnation of the "Diamond Pebble" concept of the SDI era - that is, about placing ready-made kinetic interceptors in space.

In the 1980s, the "pebble" was planned as 4000 orbital interceptors weighing 14 kg. At the same time, the Pentagon did not hide the fact that the group was intended to clean up what could take off after a preemptive strike. An alternative option was to place 100 satellites in orbit, making it unacceptably expensive.

Meanwhile, the USSR's nuclear arsenal included 1406 ICBMs. Russia's modern arsenal is 302, while the effectiveness of a disarming strike could potentially be much higher - for a long range of reasons, from the development of anti-aircraft weapons to the increase in the accuracy of Trident warheads. Accordingly, the size of the orbital group can be radically smaller.

At the same time, plans to deploy a space-based missile defense system, as in the eighties, appeared against the backdrop of the "arrival" of medium-range missiles, both then and now being a means primarily of a disarming and decapitating strike. This "coincidence" is no coincidence.

However, even outside the hypersonic context, the deployment of a full-fledged space missile defense system is an extremely dangerous strategic shift to which both Russia and China will have to respond. The prospects are clear. Russian Foreign Ministry: "An armed confrontation in space can have no less detrimental effect than the nuclear arms race unleashed by Washington back in the middle of the last century, the consequences of which the whole world still cannot cope with."

At the same time, in a very foreseeable future, there will be technical prerequisites for the "massing" of space weapons.

Launching cargo into orbit from Earth is now extremely energy-intensive. So, "Proton" with a launch mass of 705 tons delivers 23,7 tons to low orbit (3,6% ground). In geostationary orbit, there are 3,7 tons from the launch 711,6 (with the upper stage) - the "efficiency" is reduced to 0,5%. In this case, the main load of the rockets is not a fuel, but an oxidizer. For example, in order to burn a ton of kerosene, 3,5 tons of oxygen have to be used.

However, the hypersonic revolution also has a space aspect, solving the latter problem. Hypersonic jet engines (scramjet engines), using atmospheric oxygen, are potentially capable of accelerating the vehicle to a speed practically corresponding to the first space speed. Undoubtedly, the achievement of the required parameters by the "serial" scramjet engines is a matter of decades, but already much lower speeds give a huge gain.

The most active fuel is consumed at the beginning of acceleration, when the rocket mass is at its maximum. As a result, the device, previously accelerated to 2 km / s (7200 km / h, less than 6 “standard” swings at the ground), will save 50% of fuel in rocket mode. 4 km / s will save up to 80%.

A much more tangible prospect is the use of actively developed nuclear tugs in the space sector, reducing the mass consumption many times (when using the developed plasma engines by 7-8 times). In other words, only this technology increases the area of ​​practically used space by almost an order of magnitude. The conclusions from this are peculiar.

In December, the deputy general director of Roscosmos for international cooperation Sergei Savelyev drew attention to the fact that the agreement on the Artemis program does not contain a traditional "anti-militarization" clause and admitted that the United States intends to implement military programs on the Moon. The same conclusion can be drawn from other American documents.

So, from the point of view of DARPA, reflected in the substantiation of the project of the nuclear space tug DRACO, “in the foreseeable future, all space within the lunar orbit will have enormous scientific, engineering and military significance”.

What is the interest of the Moon itself? It has two obvious options as a potential launch pad - six times lower gravity and no atmosphere. The second means additional savings - and the availability of solar energy.

Moreover, the difference in the depth of the "gravity well" has a "qualitative" character. The first space velocity for the Moon, required to enter orbit, is only 1,68 km / s - less than that of a projectile of a modern tank gun; the second space - 2,4 km / s. Quite achievable for electromagnetic acceleration systems. Meanwhile, the use of "catapults" means costs for the withdrawal of the order of 0,5-1 dollars per kilogram - 10-20 thousand times less than the maximum minimum for chemical missiles launched from Earth. At the same time, a completely electromagnetic launch from the Earth is unrealistic - at a speed of 8 km / s, any apparatus will burn in the atmosphere. On the Moon, the problem of air resistance, in principle, does not exist.

In other words, the Moon is theoretically the key to hegemony in near space. As a consequence, the use of lunar resources was considered in the SDI framework.

In the eighties, the creation of an appropriate infrastructure was a very distant prospect. So, flights under the Apollo program looked very peculiar. The rocket with the mass of a WWII destroyer (Saturn-5, 2965 tons) transported the lunar module, the mass of which, excluding fuel, was just over two tons - 0,07% of the launch module. At the same time, an ordinary flight cost 2 billion of the then dollars - about half of the aircraft carrier.

Meanwhile, the then ideas about the Moon assumed, for example, that for the synthesis of rocket fuel (oxygen-hydrogen pair), huge volumes of rock with a water content of 0,1% would have to be processed. This already required the delivery of thousands of tons of cargo, which meant trillions of costs. This was followed by "little things" - for example, the then efficiency of solar panels was less than 10%, which implied a large volume of "delivery", and the cost - about 100 thousand dollars per kilowatt of power. The rudimentary level of robotization assumed that the created infrastructure would have to be serviced by a significant team.

Meanwhile, the production still had to be delivered to Earth - and when using rocket engines on chemical fuel, the gain turned out to be not so great.

However, in 2009, the growing suspicions about the presence of water ice in the craters of the Moon's south pole turned into confidence. The "ice factor" means the compression of production costs and the scale of infrastructure by at least fifty, and at most hundreds of times. At the same time, for example, the efficiency of modern solar cells in space is more than 40%, with a corresponding saving in the delivered weight. Finally, the robotization of resource extraction is becoming commonplace.

As a result, the epic "construction of the century" shrank to a relatively compact "space gas station", operated mainly remotely. It is still very expensive, but no longer prohibitive.

At the same time, the main bonuses will be received by those who can establish control over the polar regions - the lunar analogue of the Persian Gulf.

While this is a very distant prospect. However, if nothing extraordinary happens, the first steps to militarize outer space will be made fairly quickly.
Reporterin Yandex News
Reporterin Yandex Zen
7 comments
Information
Dear reader, to leave comments on the publication, you must sign in.