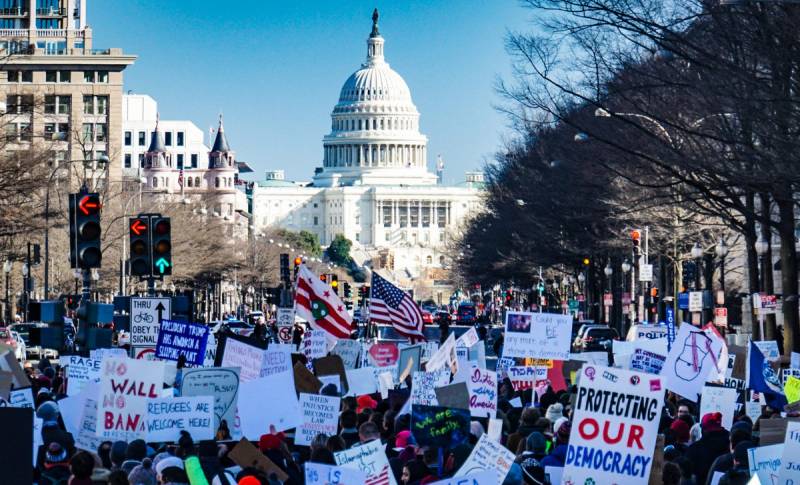 Classical Marxism presupposes a gradual change of social formations, the crown of which should be communism. But this is theory, but practice so far demonstrates otherwise: the world does not smell of communism, and even those countries that at one time embarked on the path of building it, the USSR and China, in fact, returned to capitalism.


Regarding Russia, we, its citizens, do not need to say anything, but in the Celestial Empire, despite the sole rule of the CPC, there is no trace of public ownership of the means of production - a key feature of socialism as the initial stage of communism. In fact, "socialism with Chinese characteristics" is economyoperating on a market basis, simply with a serious presence of the state in many areas.

All roads lead from Washington

However, we are not talking about the future of communism. And about the future of the world. And here you will have to talk more about capitalism, since it is he who is now having a decisive role in the processes taking place on the surface of the globe.

Let's start with Biden's recent election victory in the United States, a country that is a showcase of capitalism. Until recently, it seemed that Trump and his supporters were a real and strong alternative to the supporters of globalization from the Democratic Party, and the time is not far off when globalism itself will finally fall under the blows of patriots - both in America and in other countries of the "liberal bloc". Trump himself said from the UN rostrum that "the future belongs to patriots, not globalists."

But after the notorious "storming" of the Capitol, this confidence collapsed like a house of cards. Of course, the 70 million people who voted for Trump have not gone anywhere, and over time they will recover from the blows inflicted on him and will try to resist attempts to establish a liberal diktat with the legalization of migrants, the abolition of the right to freely carry weapons, etc. But now they do not have the same "real rioters" as Trump was.

The Trumpists will unambiguously make attempts to nominate their leaders, but the Democrats, who nevertheless dumped the "impossible Donald", will do everything to prevent this. Their opportunities, as we have already seen, are rather big, persistence in achieving goals is also as much as necessary, and now they have experience, from which they have already drawn the necessary conclusions for themselves. Anyone they suspect of wanting to be the next Trump is in hell. And if the 45th president himself dares to take revenge! ..

However, what will happen next in the States, time will tell. It is important for us to note the fact that the adherents of the global world order turned out to be much stronger than it seemed until the last moment. Now let's move on.

Two ideological camps in the USA

Despite the fact that the sympathies of many Russians are on Trump's side, since his patriotism is closer to us than the position of Biden's supporters and comrades, but let's be frank: there were no prospects for our countries to start cooperating on a mutually beneficial basis, even if would the Trumpists become the dominant political strength in the United States for decades to come. And the actions of the 45th President (withdrawal from the INF Treaty, Don, unwillingness to extend START-3) are a clear evidence of this.

Nevertheless, if you look at the issue in terms of the medium and long term, Trump is clearly a lesser evil than the forces that have won in America now. For one simple reason: Trump's goal was to return to the principles of "traditional capitalism" as we have known it for the last 70 years, and to ensure the prosperity and power of his state, to consolidate its economic, military-political and technological leadership in the world for the maximum possible period, in ideally - forever. The same "Make America great again".

All this, in general, is in the interests of the military-industrial complex, the oil industry and other conditional "production workers" from among the American business elite, whose enterprises are located in the country, and who sponsored the election of Trump in exchange for lobbying their own interests. But the Democrats are traditionally backed by IT corporations (almost the first to transfer production, first to China, and now to Vietnam and beyond, where labor is cheaper), as well as Wall Street, whose interests are with the real sector of America and the welfare of its inhabitants intersect only sporadically. In other words, national and transnational capital are opposed to each other here.

This division is to a certain extent arbitrary, but our task is to outline the contours, and not to sort out all the details on the shelves. This is not important - it is important what goals the sponsors of the Democrats pursue.

And they have incomparably greater ambitions than the Trumpists. At the same time, the United States for them is not an end in itself, but only an instrument for promoting their own interests, which extend to the whole world. Quite in the spirit of Trotsky with his "brushwood for the world revolution." It is no coincidence that among the Democrats there are a dozen of those who in their youth were very fond of the ideas of Leiba Bronstein, the same Hillary Clinton.

It was Trotsky's principles, albeit in a strongly "modernized" form, that formed the basis of their ideology, which they spread throughout the world: this is the notorious multiculturalism, and the construction of a "new morality" with a gender "revolution" and other delights, and environmental protection in the spirit of Greta Thunberg, and the decline in the world's population and much, much more. This list ends with a desire to control not just behavior, but a person's way of thinking with the help of electronic of technologies... At the same time, the levers of control, according to the architects of the new world order, should not be in the hands of the state.

As a matter of fact, here we come to the main goal of the globalists, who promote the above-mentioned "values" by no means because they really share them. And they understand perfectly well that if the "ideology" they support triumphs in the whole world, then chaos will reign on earth. Moreover, it is precisely this chaos that they seek. But why?

Let us venture to suggest that the ultimate goal of these gentlemen is the elimination of the state as a capable social force. Since only this element of the life of human society prevents the current transnational corporations from receiving as much profit and having as much power as they want. And their appetites are truly unlimited. And they will continue to promote the global liberal project by hook or by crook.

Can you imagine what our planet will turn into if they get their way? It is then that the notorious "end of history" will come, and it will not be at all what Fukuyama predicted. This will be a world in which capitalism will reach its final stage of development, a world of global and total slavery, before which Orwell's dystopias will seem like mere children's fairy tales.

Nevertheless, this phrase of Comrade Saakhov is quite applicable in our case. Since, despite the clearly declared intentions of the globalists and clearly formulated tasks, the solution of which they are working out with might and main in practice, not everything is so simple. After all, many people both in the world and in the Western countries themselves do not like what is happening. To begin with, it is too early to write off Trump's supporters in America itself, although they are demoralized by recent failures, and the strategic initiative is clearly on the side of their enemies.

And the world itself, as you know, consists not only of the United States and its satellites. The real threat, and, moreover, not very weak, for the plans of the "neo-capitalists", let's call them so, are China and Russia. And not only economically (this should be attributed to China to a greater extent) and politico-military (here we are, perhaps, still stronger than Beijing), but also mentally, if you like. Because both we and our current (apparently temporary) allies from the Celestial Empire have one thing in common: the primacy of public interests over private interests and the desire to build a strong state. Is this the reason why the Biden administration is in solidarity with Trump in identifying the main threats to the United States?

However, both we and the Chinese have a rather large set of our own problems, which globalists will certainly play on in the future. However, this still does not guarantee them victory. At least, judging by their behavior, China has a quite intelligible program of action aimed both at overcoming its weaknesses and at countering external threats. Does Russia have it? We will try to talk about this next time.
Ctrl Enter
Noticed oshЫbku Highlight text and press. Ctrl + Enter
We are
"We must beat first": the geopolitical alignment around Russia is continuously deteriorating
Ten "defeats" of Putin
Reporterin Yandex News
Read Reporterin Google News
47 comments
Information
Dear reader, to leave comments on the publication, you must sign in.